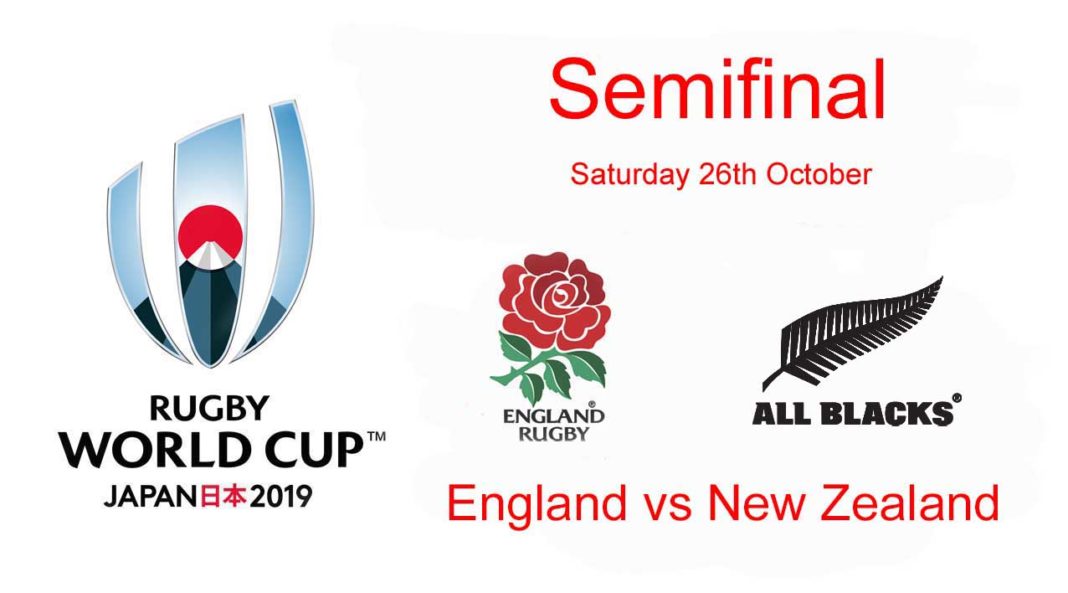 On Saturday 26th October, all the huffing and puffing comes to an end at 17h00 in Yokohama, Japan. Eddie Jones’ teasing, his accusations of spying, all the talk about the southern hemisphere not taking the north seriously, the threats and promises to dethrone the All Blacks, the jibes and digs, the prickly and the funny. Courtney Lawes telling Brodie Retallick that he will “know my name” and every other sideshow intended to build pressure or hype about this game – they all come to an end.

When the final whistle blows either England or New Zealand will be progressing on to the 2019 Rugby World Cup Final, and the other will be relegated to the 3rd/4th playoff game.

Steve Hansen has suggested that it will be a Game for the Ages.

Whatever happens, the rugby world will be watching.

Eddie Jones has recalled George Ford into the starting line-up that will face New Zealand on Saturday.

Captain Owen Farrell is again named at inside centre with Ford selected at fly-half and Manu Tuilagi at outside centre for the game in Yokohama.

Billy Vunipola will play in his 50th Test match for England with Sam Underhill and Tom Curry also named in the back-row.

Jonny May will start on the left wing with Anthony Watson named on the right and Elliot Daly continuing at full-back.

Maro Itoje and Courtney Lawes are named in the second-row while Mako Vunipola, Jamie George and Kyle Sinckler make up the front-row.

Steve Hansen has made just one change to his starting XV for Saturday’s Rugby World Cup semi-final against England in Yokohama.

Scott Barrett comes in to the starting side on the blindside flank, as Ardie Savea moves to the openside flank while Sam Cane drops to the replacements bench.

The only change to the matchday 23 which beat Ireland in the quarter-finals sees Patrick Tuipulotu coming in on the bench as a replacement for the injured Matt Todd.

England seem to have been building up a head of steam as they head into this game. They have been playing direct, focussed rugby, using their loose-trio as their primary weapon. They were given a bit of a run-around by Tonga early in their first round fixture before a couple of first-half tries from Manu Tuilagi helped secure a solid, in not spectacular, 35-3 bonus-point victory at the Sapporo Dome. Jamie George and Luke Cowan-Dickie added two further tries in the second half to add some real respectability to their score. Next up they easily dealt with the USA and that was followed by the red-card marred win over Argentina. Their final Pool game against France was called off because of the weather.

Last week they easily disposed of an Australian outfit that seemed hell-bent of rugby suicide. That quarterfinal win was built on a great performance by their loose-trio, with their two flankers,  dubbed  the ‘Kamikaze Kids’ –Tom Curry and Sam Underhill playing some accurate pressure rugby to shut down Australia’s continual, often ludicrous, attempts to run with the ball from somewhere deep inside their own half.

Without a doubt, it was a ruthlessly efficient game of rugby as the English allowed the Australians to play with the ball, knowing that their defences were more than adequate to stop the Wallabies, while waiting for the inevitable mistakes, and the opportunity to pounce.

Whether their run in to this semifinal has prepared England for a game against the All Blacks remains an unanswerable question.

New Zealand had a somewhat different run into this semifinal. They kicked off their Pool B games with a hard-fought victory over South Africa. The 23 – 13 scoreline suggests that it was a comfortable win, yet it was really a close run thing. South Africa had the best of the first half, save for a period of some 15 minutes when they abandoned their direct physical game plan and tried to play the All Blacks at their own quick-handling running game. Two mistakes by Duane Vermeulen and Handré Pollard, and New Zealand had the lead through two tries. After the halftime break South Africa went back to their tried and tested game plan, and wrested back control of the game. They came close, just a wayward pass to Cheslin Kolbe and a missed penalty conversion by Handré Pollard stood between these two teams and yet another drawn Test.

Whether they won or lost the game is actually of little relevance in the overall scheme of things, and is of little import as the semifinal looms, yet that game tells us that the All Blacks have had one very hard battle at this World Cup.

The All Blacks have been tested in the cauldron of top level Test match rugby, while England, perhaps, have not.

This very fact might be very important when the game ticks into those last minutes of the second half. Which team has the battle-hardness and form to drag a close one through to the end?

The game promises to be an enthralling encounter.

If they have watched an All Black games in 2019, especially that Pool B encounter between the All Blacks and the Springboks, England will know that they need to be fully focussed and concentrate for every second of every minute of the game on Saturday. If the concentration slips, just for a moment, the All Blacks will punish you! The All Blacks focus on playing error-free rugby, at a high tempo, for the entire game, which challenges their opponents to concentrate right to the very end.

After a game where England were happy to hoof the ball into the Aussie half of the field and then say “Okay, now you come at us” they might think that this strategy will work against the All Blacks.

Undoubtedly it can, if the box-kicks and the tactical kicks are 100% on the money. Wayward kicks that allow Beauden Barrett, George Bridge and Sevu Reece space to move in will be punished, every time!

The selection of George Ford at flyhalf may well indicate that England will not be kicking quite as much as they do when Farrell has the 10 jersey on his back. If they do, it is likely that the kicks will be shorter and more contestable rather than longer kicks to gain field position. This would be taking a leaf out of the South African playbook, with tactics deployed with some success against the All Blacks in the last two seasons.

We know the All Blacks and their game plans and strategies well enough to not need a recap. They play a game focussed on taking the ball away or through contact, based on achieving parity in the set-pieces rather than dominance, with the quick hands of their midfielders looking to create opportunities on the inside or outside. They do not seek absolute dominance at breakdowns, simply their own ball will suffice, and then they seek to slow the opposition ball as much as possible.

The ball is carried into the midfield to set-up very quick recycles, with Mo’unga’s role to take the ball up, and then allow Barrett to dictate play from the next phase. This is balanced by some pinpoint kick-passes into the wider channels by, especially, Richie Mo’unga.

The overall balance and strength of the team is enhanced when key players find form, and this has never been more evident than in the form Aaron Smith has started to produce in the last couple of runs.  He has been remarkably focussed and in control of the game at this World Cup, and is backed by the top form of his two linking players, Mo’unga and Barrett.

The make-or-break of this game will be in the forward battle.

If England’s tight five and loosies can impose themselves of the All Blacks, they may well have the winning of this one. I have a sneaky feeling that Steven Hansen is worried about this very aspect – which is why he has brought Scott Barrett into the starting team on the blindside. Barrett adds weight and power, as well as an additional lineout option.

Those lineouts might be crucial. England are starting with two and a half recognised jumpers, primarily Maro Itoje, Courtney Lawes, with the backup jumper being Tom Curry. Their usual lineout kingpin has been George Kruis, and he is on the bench. They face the salted warriors Retallick, Whitelock, Read and now Barrett – giving the New Zealanders four recognised jumping options in the lineout battle.

The scrums are likely to be even, with perhaps the battle between Joe Moody and Kyle Sinckler being the most interesting for aficionados of the dark arts of front row play. Neither are the most powerful scrummagers in the game, with Moody visibly creaking against South Africa. If Sinckler gets his number, this may give England an edge.

On paper, England perhaps have the more powerful forwards, but that remains moot if they cannot stop the All Black forwards from playing their quicker supporting roles in the midfield and wider channels.

Another match-up worth watching will be Kieran Read against Billy Vunipola. Both have been a little quiet in the 2019 tournament. Read did seem to find some form against Ireland, while Vunipola does not look 100% match-fit, although his sheer physicality does take some stopping.

Mo’unga and Barrett versus Ford and Farrell? Four playmakers in one game?

The two New Zealanders are all about running and handling opportunism, the English duo are the controlling and tactical types. Two of the four are playing out of position, with Barrett running from 15, and Farrell as the second playmaker in the 12 jersey.

Seems to me that the message is that England are going to try and break through the All Black midfielders, with Farrell and Tuilagi the battering rams. They seem to have more power, more muscle, than their counterparts from the deep south.

Both teams have flying wingers, with the New Zealand pairing perhaps more dangerous in broken play, while the England wingers are better off set-piece plays.

This game is going to hinge on factors other than the physical. It will be about intensity, about focus, about precision, and about the soft moments.

The team that makes the most mistakes is going to lose this one.

The All Blacks have, without a doubt, played the best rugby of all the teams at the 2019 RWC. Yes, some of those games were against softer opponents, the likes of Canada and Namibia, but their resolve and focus was severely tested by South Africa, and they came out on top there.

England have not yet hit their straps. They have not yet been properly tested. The game against Australia did not, to my mind, do them any favours in preparing them for the intensity of a game against the All Blacks. England do have a well-drilled and supremely fit team, but can they produce the full-80 focus that is essential if you want to stand a chance of beating New Zealand?

Methinks that the All Black skill-sets and high-intensity error-free game will win the day.