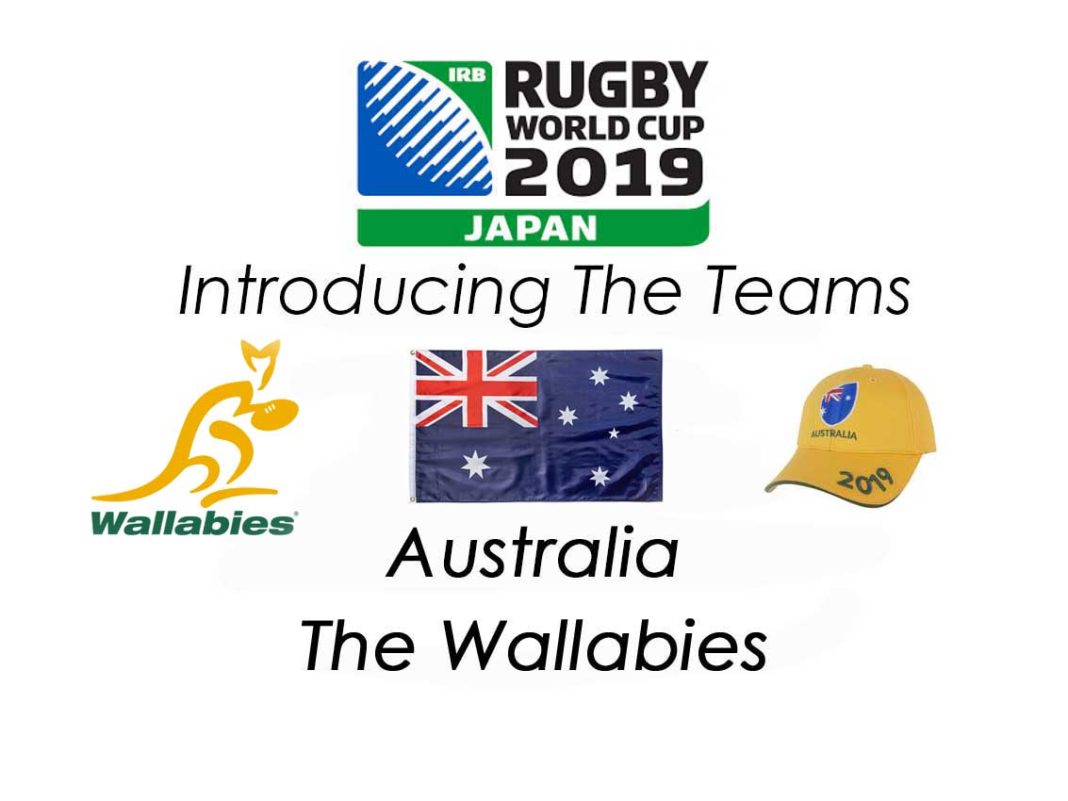 The third in our series introducing the teams of the 2019 Rugby World Cup.

Two time Rugby World Cup winners, runners up on a couple more occasions, the Australian team, commonly known as the Wallabies, have a remarkable international record for a team sport played in a country where most of the locals are interested in anything but rugby.

In times past the Wallabies were innovators and thinkers that introduced all manner of tactical changes and game plans as they went up against the Goliaths of the game, often winning as a result.

Of late their record has been less than stellar.

Since the 2015 Rugby World Cup, where they progressed all the way to the Final, things have gone a bit downhill, with 2016 being the beginning of a downward trend in their results. In June of that year they lost a three-test series against England, in the Rugby Championships they managed two wins over Argentina and one over South Africa, but also lost one to South Africa and both games against New Zealand plus the third Bledisloe test that year. In the end of year internationals, Australia managed wins against Wales, Scotland and France , but lost to Ireland before losing a fourth game against England.

In the 2017 internationals Australia secured wins against Fiji and Italy but lost against a depleted Scotland side. They then won their two games against Argentina, lost both matches against New Zealand and struggled to two draws against a poor South Africa. They pulled off a surprise 23-18 win in the third Bledisloe test that year, but in their autumn test season they only achieved wins against Japan and Wales before suffering a fifth straight defeat to England and a crushing, record-setting loss to Scotland by 53–24.

7 wins, 2 draws, and 5 losses might appear better than 2016’s tally, but the wins over Italy, Japan, and Fiji do skew the figures somewhat.

2018 was one of the worst years ever for Australian rugby. In the June series against Ireland, Australia won the first test 18-9, but lost the remaining matches 21-26 and 20-16. They again lost both matches against arch-rivals New Zealand in the Rugby Championships. Although they secured a hard-fought 23-18 victory against South Africa in Round 2, they subsequently lost to Argentina at home for the first time since 1983, as well as the return fixture to South Africa 23-12. Their third win of the year was against Argentina where, despite losing the first half 31-7, the Wallabies pulled off an astonishing second-half comeback to win the match 45-34. In the final Bledisloe test, played at Yokohama stadium in Japan, the Wallabies were again trounced by New Zealand 37-20. That autumn, Australia suffered their first defeat to Wales in 10 years, going down by 9-6. They defeated Italy 26-7 the following week, before falling to a sixth defeat to England by 37-18 the week after. The Wallabies finished 2018 having won only four games from thirteen tests played, their worst calendar year since 1958.

2019 has been slightly better, with wins over Argentina and New Zealand, following a thumping by what was essentially a South African “B” team.

Despite their woeful run of results in the three years since the last RWC, it would be a mistake to write Australia off.

They are a team for the bog occasion, and no occasion is bigger than the Rugby World Cup. They will take some heart from the form and style of the Brumbies in Super Rugby, who showed what an Aussie side can do if they remain focussed and motivated.

The Oddschecker website tells us that the bookies of the world have them at 16/1 for the title.

Australia were one of the 12 automatic qualifiers for the 2019 tournament.

Michael Cheika’s first Wallabies squad of the year, for the Rugby Championships, has some interest in taking note of who had been left out. There was no room for Quade Cooper, Nick Phipps, Tatafu Polota-Nau, Sam Carter, and Ned Hannigan who were all left out for various reasons.

There is plenty of firepower in this Wallabies side if they can put it all together.

Up front we are likely to see Scott Sio maintain his role as the starting loosehead prop, likely partnering either Sekope Kepu or Brumbies teammate Allan Alaalatoa. Kepu can play on both sides of the scrum which gives him an advantage when selections are made. Taniela Tupou adds tighthead muscle, although he is still very green.

The three hookers, Folau Fainga, Tolu Latu and Jordan Uelese are somewhat inexperienced. Especially with Uelese having spent most of the year recovering from an injury he suffered early in 2019 whilst Latu sat out a number of matches due to misbehaviour both on and off the field.

Izack Rodda has been in good form for the Reds this season and Rob Simmons seems to have found a new zest for the game since joining the Waratahs. Luke Jones is another who has found a new lease of life this year, and can play at loose forward too.

The loose forward combinations may be a bit tricky. Nobody knows whether David Pocock will be playing in the World Cup. Some have suggested that there should be a direct choice between Pocock and Hooper and that they should not be fielded as a combination.  Lukhan Salakaia-Loto, who spent the latter half of last year away from rugby, could slot straight back into the 6 jersey – though he’ll have tough competition from the likes of the utility player Luke Jones, Rob Valetini and the somewhat experienced Jack Dempsey.

On the openside, Liam Wright has been brought into the squad to cover for David Pocock. Michael Hooper is ever-present.

At halfback, Will Genia and the returning Nic White seem likely to share starting duties.

Christian Lealiifano, Bernard Foley, and Matt Toomua are selected as flyhalf coverage. Lealiifano has probably done enough in Super Rugby and then in the Rugby Championships to usurp the starting role from Bernard Foley.

The midfield is served by Samu Kerevi,Tevita Kuridrani, Adam Ashley-Cooper and utility playersReece Hodge and Kurtley Beale, although the latter may be seen in the 15 jersey as a replacement for the discardedIsrael Folau.

Dane Haylett-Petty will put up an excellent challenge for that fullback spot, although he can also play wing. Reece Hodge also comes into the picture at fullback, as does Tom Banks.

Marika Koroibete, Jack Maddocks and Adam Ashley-Cooper are all options on the wing.

A volatile individual, Michael Cheika was born on the 4thMarch 1967. The 52-year old has been coaching at various levels since 1999, when he started with the Italian Petraca Padova club. He moved to Randwick, the club where he started his playing career, in 2001, and left to go to Leinster in Ireland in 2005. In 2010 he moved across the channel to France and Stade Francais until 2012. In 2013 he joined the Waratahs in Sydney, staying on as head coach until the end of 2015, although he had been appointed head coach of Australia in 2014.    He is set for his second World Cup in charge, having guided the Wallabies to the final in 2015.

He has been under some very real pressure to resign as the Wallabies have been through a lean period under his charge, but has survived all attempts to get him to leave the Wallaby set up. His record in charge of the Wallabies, reflects 61 games played, 30 wins, 2 draws and 29 losses, a 48% win ratio. During his reign as coach the Wallabies have scored 1480 points and conceded 1450. (Prior to the 2019 Rugby Championships.)

The Wallabies have struggled in the set-pieces against the bigger sides, and have adopted a phase-game style in an attempt to avoid the scrums and lineouts, using their big midfield carriers and some mobile front-rowers to set up the ruck phases, relying on David Pocock and Michel Hooper to ensure continuity of possession. They have played a quick game, waiting for the opportunity to release their favoured strike runner, Israel Folau. This option is no longer available, to them, and they will be looking to play fast and loose to avoid too much contact over the ball, especially if David Pocock does not make it to the RWC.

They will need to find an alternative attacking option to Israel Folau, and have focussed on using Samu Kerevi as their primary ball carrier, while attempting to put Beale into space.

Some of their players have struggled with defence, especially the likes of Beale and Foley.

The biggest issue facing the Wallabies appears to be a sense of entitlement amongst the core of the playing group, where monetary demands often exceed the results they achieve.

Australia are in Group D alongside Wales, Fiji, Georgia and Uruguay.

Australia and Wales are the likely quarterfinalists from this group. Australia should beat Uruguay, Georgia, and Fiji comfortably, but may lose to Wales.