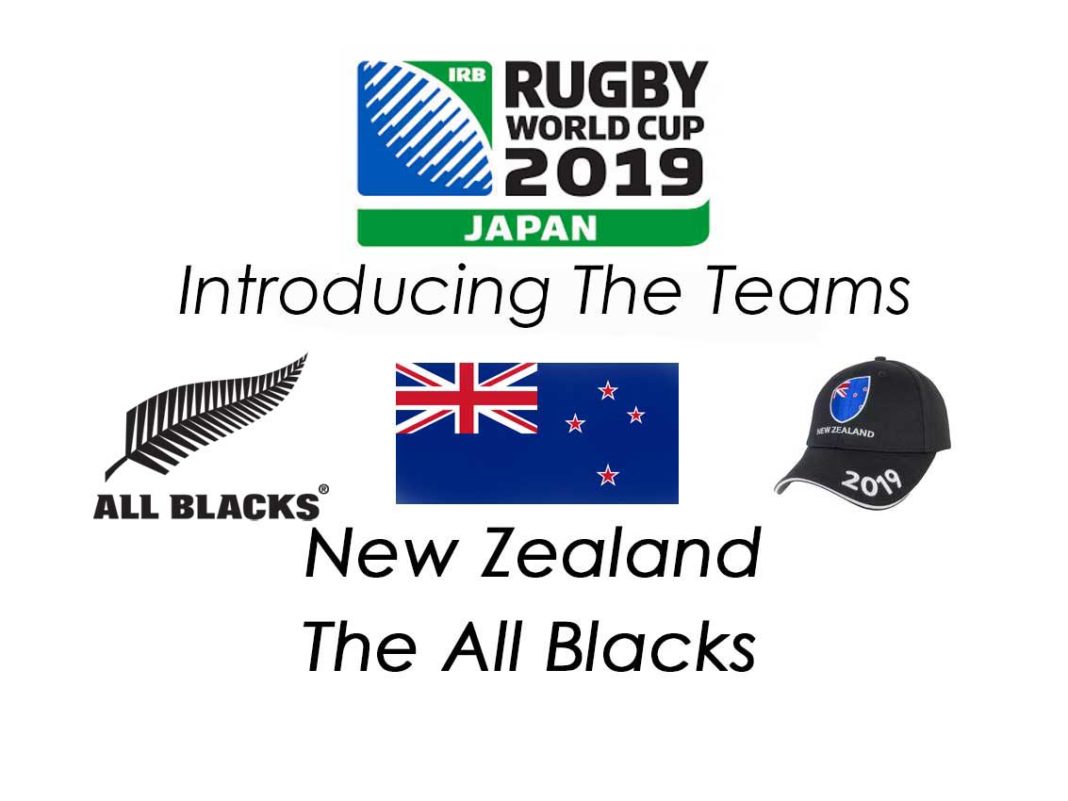 We begin our warm-up for the RWC with a series of articles that will introduce each team in turn. The honour of being the first goes to the current and thus defending champions, New Zealand.

Known to one and all as the All Blacks, New Zealand are, at the time of writing, still ranked No 1 in the world.

The All Blacks are the most successful Test team in international history, with a 77,41% winning ratio in more than 580 Tests played since 1903. There is some debate about which sporting team is the most successful in all sports played across the world, but many of the names thrown up as possible contenders are not international teams – the New York Yankees or the Miami Dolphins are hugely successful, but only play within their own leagues and within the borders of the USA as their sports are certainly not true international sports.

In terms of international sporting successes, the All Blacks tower above all others.

Since the introduction of the World Rugby ranking system in 2003, the All Blacks have ranked No.1 for 80% of the time. They had not been knocked off that lofty perch since 2009, until last weekend, when they were briefly deposed by Wales, a loss of status that lasted barely 24 hours before Wales, in turn, lost their elevated status.

The All Blacks have been awarded the World Rugby team of the Year title on seven consecutive occasions from 2010 to 2016.

The winners of the last two World Cups, and the 2016, 2017, & 2018 Rugby Championships titleholders, the All Blacks are, once again, the favourites going into the 2019 Rugby World Cup.

The Oddschecker website tells us that the bookies of the world have them at 6/5 favourites. These odds may change a little after their loss to Australia in the last round of the Rugby Championships.

A Rugby World Cup win in 2019 would give them an unprecedented hat-trick of titles.

The All Blacks set the benchmark, and every other team works to match and perhaps surpass that mark.

Automatic qualification as defending champions. Winners of the previous tournament held in England back in 2015.

Where to start? Packed with world-class players, and incredible strength and depth, with the likes of Beauden Barrett, Aaron Smith, Richie Mo’unga, Ryan Crotty and Ben Smith in the back-line, and Kieran Read, Sam Cane, Dane Coles and Brodie Retallick up front there is probably no single player that could be nominated as key to their campaign.

The depth in their squad remains unquestionable, you only need to look at some of the players who did not make it into the first Rugby Championships squad of the year: Nathan Harris, Akira Ioane, Luke Whitelock, Tyrel Lomax, Tom Robinson, Te Toiroa Tahurioarangi, Ma’a Nonu, and Waisake Naholo.

They have plenty of world class hookers, Dane Coles, Codie Taylor, Liam Coltman and Asafo Aumua, with Nathan Harris waiting in the wings.

Brodie Retallick and Sam Whitelock make up one of the world’s best second row combinations with Scott Barrett and Patrick Tuipulotu  as pretty serious back-up options.

Openside flankers Ardie Savea, Sam Cane and Matt Todd are amongst the best in the world.

The blindside flanker position is perhaps the single problem are for the All Blacks, with Liam Squire having removed himself from selection for the Rugby Championship. He could still make himself available for the RWC, which will solve something of a problems as the All Blacks have undoubted depth of talent but are hugely short on experience with Shannon Frizell and Vaea Fifita the prime candidates, along with Luke Jacobson, although he may well be seen as an understudy to Kieran Read at No.8.

The midfield is perhaps less settled as a there is no automatic first choice combination of the following:  Ryan Crotty and Sonny Bill Williams,Anton Lienert-Brown, Jack Goodhue and Ngani Laumape. All will cause their opponents some serious problems.

The outside backs look exciting and dangerous, if somewhat short on experience. Rieko Ioane, George Bridge, Braydon Ennor, Sevu Reece and Jordie Barrett are all under 25 years of age.They do have the vast experience and nous of Ben Smith to mentor and lead whichever back three are chosen on the day. Smith can play either fullback or wing.

The All Blacks are a formidable outfit, in anyone’s language!

Born on the 7thMay 1959, the 60-year old coach has been involved with the All Blacks since he joined Graham Henry as an assistant back in 2004. When Henry left, Hansen stepped into the senior role as Head Coach in 2011, and has been in the job ever since. Together with two years as head coach of Wales, he has thus been involved with coaching rugby at the Test level for almost 17 years.

He has a remarkable 88,54% winning ratio as Head Coach with the All Blacks, the team having played 99 games, winning 86, drawing 4 and losing just 9. During this time the All Blacks have scored 3406 points, and conceded just 1581.

Steve Hansen has won the World Rugby Coach of the Year award four times, and has one the World Cup once as Head Coach (2015) and once as assistant (2011).

The All Blacks are constantly under the microscope as coaches, technical analysts, unit specialists, and top level players look for the key that will unlock the All Black doors. Such is the intensity of focus, the plotting and planning that it becomes something special that this team is still ranked No.1 in the world. Everyone is trying to knock them off that perch.

During the 2018 year they were said to be looking vulnerable, and they promptly played 16 Tests, produced 13 wins, 2 losses and a draw.

In 2019 the same rumour of vulnerability emerged, especially after they drew with the Springboks and lost to Australia in the Rugby Championships. (This preview of the All Blacks is written before the second round of the Bledisloe Cup is played.)

Whether a shaky start to the 2019 international season is an indication of vulnerability remains to be seen. The All Blacks are notoriously slow starters to a season, mirroring their domestic champion side, the Crusaders, with a strategy that seems focussed on not peaking too early and finding their mojo when the real rugby starts towards the end of the season.

Some have suggested that the long run at the top of the World Rugby rankings has made the All Blacks arrogant, and thus somehow made them soft, I would suggest that we wait until the World Cup is over before we attempt to make such a call.

Suffice to repeat, the All Blacks have set the standards and provide the benchmark for every other team in the world to measure themselves against.

Every team in the world plots and plans to match and beat the All Blacks.

With the kind of focus brought to bear by some truly remarkable rugby brains, weaknesses can be, and have, been identified. Warren Gatland identified a weakness in dealing with the rush defence.  He exploited that in 2017 and earned a drawn series in New Zealand.  Since then a number of teams have used the rush defence to nullify the All Blacks’ considerable running game and striking power. These include the Wallabies, in a dead-rubber game in Brisbane 2017, the Springboks in an epic encounter in Wellington during 2018, and Ireland against a tired end-of-season All Blacks in November last year.

Will the rush defence system continue to expose vulnerabilities in the All Black make-up? The evidence coming out of the Super Rugby season is that the New Zealand game has evolved and that they have worked out a number of counter-measures to blunt the rush defence with a dual-playmaker system, clever chips, grubbers, close-in carrying forwards, inside passes, run-arounds, kick-passes and the like.

Another issue, perhaps, is that the All Blacks have been slow starters in a few games of late, sometimes incurring a half-time deficit. This has been negated by their unbelievable ability to step up a couple of gears in the second half, but it could be a vulnerability to fast starting teams who can build and then defend a lead.

They lack a deadeye goalkicker…..

Their lineout is sometimes a bit wobbly……

Their midfield is not quite as solid as it should be…

Their loose trio is still unsettled…

The All Blacks still ooze class all over the field and can play in the wet or dry, on fast tracks and mud baths, in wind or at altitude.

The 2019 Rugby World Cup will tell us more about the state of New Zealand rugby, but you would be silly to write them off!

New Zealand and South Africa are the two likely quarterfinalists from this Group. New Zealand should beat Canada, Namibia, and Italy comfortably, with their only severe test being South Africa.