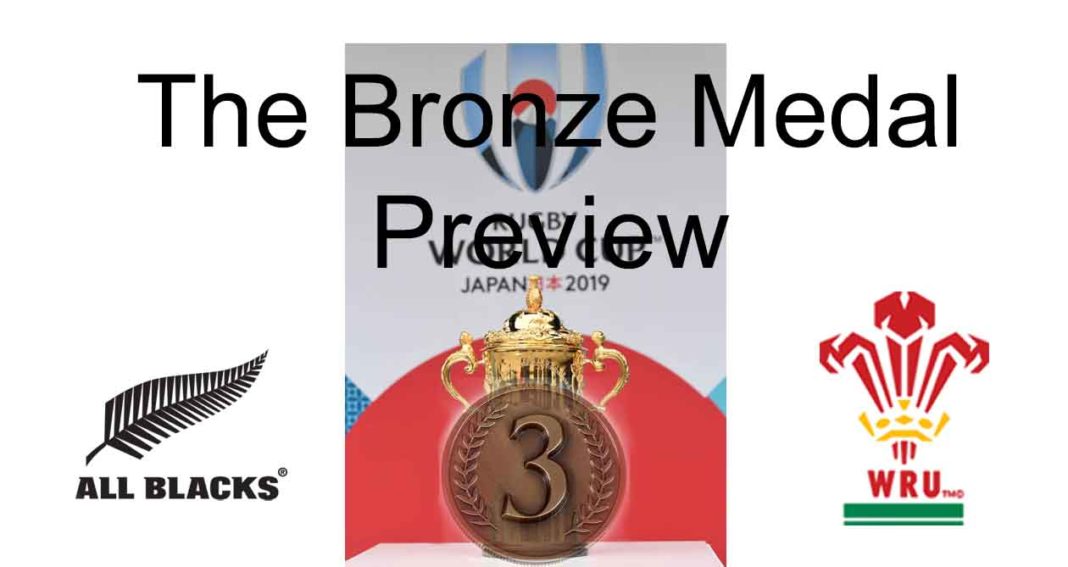 I suppose we should call this game by some appropriate name? An epithet that recognises the significance of the event, if not the game itself?

The “Bronze Final” is not good enough.

Maybe with a suitable soundtrack too?

Something like the Doors “the End” might be vaguely appropriate if only for the name of the song.

This game is significant not so much for the final order of finishing in the 2019 Rugby World Cup, but in the ending of an era, or perhaps a number of eras in rugby.

Two distinctive and honourable coaching eras are coming to an end.

Both coaches, Steve Hansen and Warren Gatland, are calling it quits after extended periods with the two teams.

Warren Gatland has been coaching Wales since 2007, and this is his final game in charge. After twelve years as head honcho of Wales he is heading home to New Zealand where he will take charge of the Chiefs in 2020.

Steve Hansen joined the All Black coaching squad in 2004 as an assistant coach to Graham Henry, and then took over from Henry in 2012, becoming the most successful All Black rugby coach of all time. Fifteen years with the All Blacks, that is some continuity there! He has not formally indicated what he is going to do after his retirement from the international stage, but there are more than a couple of hints that he will be involved with the Toyota Verblitz team in Japan, but not as coach.

However, it is not just the two coaching eras that are coming to an end. A number of players are riding off into the proverbial sunset too.

On the All Black roster we have Kieran Read, Sonny Bill Williams, Ben Smith, and Ryan Crotty all playing in what is their last game in the famous black jersey. (Crotty has not formally announced his retirement from international rugby, but he is leaving New Zealand and thus becomes ineligible for selection and at the age of 31 is not likely to be back.)

In the Wales team we have captain Alun Wyn Jones who, at 34 years of age, has not finally indicated whether he is retiring or not, although he has hinted in that direction. Jonathan Davies is 31 and coming to the end of his career. Hooker Ken Owens is 32, and thus also heading towards the end of his career.

Although the Welshmen have not indicated whether they are retiring or not, we are not likely to see them at the next Rugby World Cup.

The Ending is thus appropriate for so many of the participants.

The value and even the existence of the third/fourth place RWC playoff has been questioned by many. “Pointless” say some, “a waste of time” said another, “milking the public” was yet another somewhat cynical thought.

In a Rugby World Cup tournament there is only one final that counts, and the result of that game allows only one team to hold up the trophy and claim bragging rights for the next four years as the World Champions.

Everybody else is forced to look on.

Perhaps the only real value in this 3rd/4th game is that it allows the two teams involved to restore some pride after losing a semifinal and perhaps assuage their battered egos.

Without a doubt, the All Blacks will be wanting to make a statement of some sort after their loss to England, while Wales will have a point to prove too.

But that is about all that is in this game.

Which suggests that we might just have a fun game to watch!

The All Blacks found, to their cost, that they could not swamp the rush or press defence of the top sides with their all-out-attack game plan. They tried to do it, bringing in all manner of new ideas to add extra dimensions to their attack – their dual playmaker model, their kick-pass out wide strategy, their change from the 2-4-2 midfield strategy, their attack into the second channel off lineouts strategy. All worked, at times.

But not consistently enough to break down the defence of teams like South Africa or England. Once again the old adage that “Defence Wins Trophies” held true.

However, with the pressure off in this last run of the year we are likely to see the All Blacks unshackled and playing their wide open running game with unfettered glee. No pressure, no expectations, and no restrictions.

Wales, long considered an overly cautious team that plays direct rugby coupled to a kicking strategy will need to look for a wholly different style if they want to win the bronze medal. If they kick the ball 81 times against the All Blacks, as they did last weekend against South Africa, it is likely to cost them dearly. The New Zealanders will look to run everything straight back at them, none of the aerial ping-pong we saw in that chess game against South Africa.

We might just see Wales playing some open running rugby too.

Steve Hansen has rung the changes to his starting line-up for the Rugby World Cup Bronze Final.

There are eight changes in all – including a positional switch – to the run-on side which featured in their 19-7 semi-final defeat to England on Saturday.

In the back-line, Ben Smith and Rieko Ioane come in on the wings as replacements for Sevu Reece and George Bridge while Sonny Bill Williams and Ryan Crotty take over from Anton Lienert-Brown and Jack Goodhue as the midfield combination.

In the forwards, Read is joined in the back-row by Sam Cane and Shannon Frizell, who comes in for Ardie Savea and Scott Barrett, who shifts to the second-row where he replaces Sam Whitelock.

The final change is in the front-row where Dane Coles is preferred to Codie Taylor. There are also alterations on the replacements bench with Liam Coltman, Atu Moli, Matt Todd and Brad Weber the new faces in the matchday squad.

Wales have made nine changes to their starting XV for their match against New Zealand.

Warren Gatland has opted to ring the changes to his side for what will be his final match in charge, drawing to a close his hugely successful tenure as Wales head coach.

Nicky Smith and Dillon Lewis come into the starting side in the front-row to join Ken Owens, whilst Adam Beard returns to the starting line-up to partner captain Alun Wyn Jones at lock.

Josh Adams, who currently leads the try-scoring charts at the Rugby World Cup, remains in the back three alongside Owen Lane who comes in on the wing and Hallam Amos at full-back.

There is not much point in weighing up the two teams as units – or doing a man-by-man analysis.

I am guessing we will see some festival rugby, and nobody is better at that type of game than the All Blacks, so it could be fun.

Who cares? I will say the All Blacks are likely to win, simply because they hurt so much, so publicly, and with genuine emotion after losing last weekend and it is a matter of national pride to finish with a win.