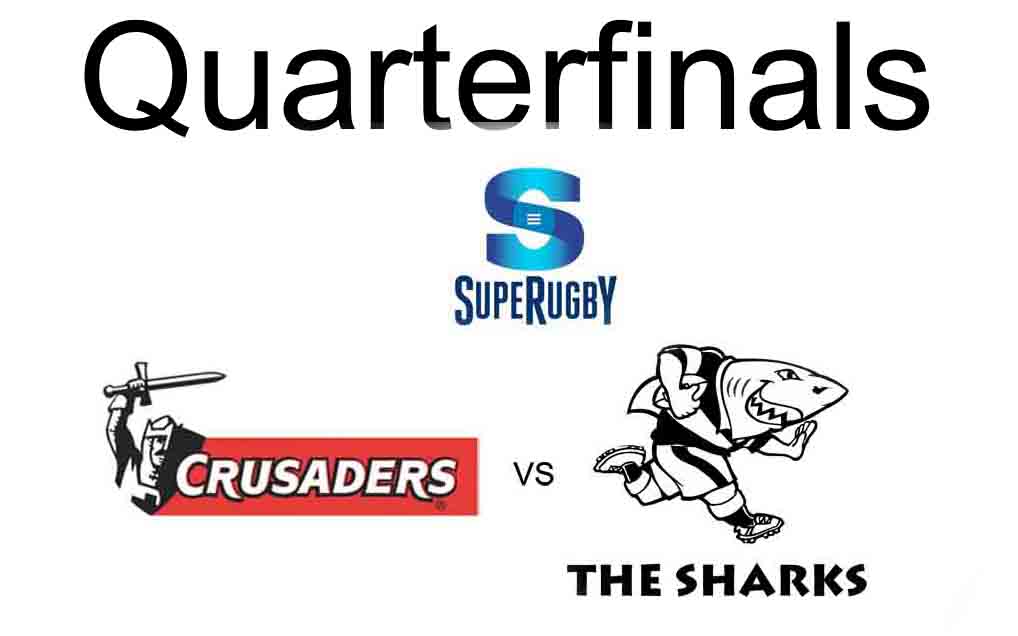 The Sharks arrived in Christchurch knowing that they faced a huge task. When it comes to play-off rugby, there are few teams in the world that can hold a candle to the Crusaders. When the result is critical, the Crusaders are the most uncompromising team in the world. They will not give an inch.

Stung by conceding a scrum penalty try a week ago against the Brumbies, the Crusaders pack stepped up to the mark and refused to give a single centimetre to the Sharks, perhaps motivated by Ruan Botha’s suggestion that this was the area in the Crusaders’ game that the Sharks would target.

The Crusaders used their forwards, in particular Kieran Read and Matt Todd in the wider channels and locks Scott Barrett and Sam Whitelock in the midfield, to build a solid platform and provide their backs with the opportunity to shine when the moment presented itself.

After a woeful two weeks back home, the Sharks stepped up a gear. In fact, they stepped up a couple of gears, enjoying both possession and territory for long phases in the game, but they were simply unable to penetrate the rock solid Crusaders’ defences.

We must also mention the performance of Mike Fraser as referee. When the New Zealand commentators question his bias, you know something is very wrong in the game of rugby. Fraser allowed the Crusaders to get away with murder on the ground and in the rucks and mauls, while preventing the Sharks for replicating the same actions. The more lenient he was towards the Crusaders, the further they pushed the envelope – that is what good sides do – but it was glaringly obvious that he was leaning towards the home side in almost every 50/50 decision, and even when the decision should have been 75/25 in favour of the Sharks.

SANZAAR have much to answer for in the ongoing fiasco that is officiating in the Southern Hemisphere. Their refusal to adopt the global practice of appointing neutral referees has become a serious impediment affecting the game.

Not that a neutral referee would have made the slightest difference in the result of this game, but it would have removed the stigma of bias and home-town decisions.

The Sharks had enough of the ball, 49% of possession was theirs, and enjoyed a huge advantage in territorial advantage for most of the game, 67% of the game was played in the Crusaders’ half of the field. Yet they were let down by handling errors and employing the wrong tactical game.

The Sharks showed some patience with the ball in hand, building on field position and trying to get their lineout drive working. But their execution in open play left much to be desired.

When the Sharks beat the Blues, and then ran the Hurricanes ever so close earlier in the season, they played a fast-paced, open, yet direct running style that focussed on taking the ball away from contact and into space. On Saturday, against the Crusaders, they reverted to their one-off runner crash ball game as they attempted to muscle their way over the ‘Sader’s defenders. It was all clatter and clutter, rather than subtle and spacey. While carrying the ball 108 times in the game, they hammered it into the ruck 77 times. 71% of their possession was taken straight into contact.

And that was their single biggest problem, once they took the ball to ground, the Crusaders were able to contain the attack by contesting only the winnable rucks, turning the ball over four times, and, most importantly, not over committing at other times, allowing the defence to spread across the field and enabling a double hit on the Shark’s ball carriers when the ruck ball was recycled. It stopped the Sharks in their tracks, time and again.

The Sharks penchant for eschewing the wide option in favour of clattering into contact was exasperating at times. One could see the opportunity building out wide, only for a mid-fielder or forward to hold on to the ball and smash into an opponent. There as one moment where Tyler Paul had two backs outside him, in a 3 on 2 situation deep in Crusader territory as the ‘Saders had finally run out of defenders, and Paul kept the ball. It needed just one pass………

Perhaps indicative of the difference between the two teams is to be seen in the ball carrying stats. The Sharks and the Crusaders shared possession pretty evenly. The hosts holding the pill for 51% of the game, and the visitors 49%.

Both teams carried the ball exactly the same number of times, 108 each.

The Sharks made just 620 meters with the ball in hand, while the Crusaders made 783 meters. That is 163 meters more! Indicative of the different styles of rugby, the one opting to take the collision, and the other trying to avoid the first collision. Adding in the fact that the Crusaders opted to kick the ball a full 24 times, mostly relieving kicks to get out of their own half, and you begin to see a picture of which team used the ball better.

Another area where the Sharks let themselves down was through poor handling. 19 handling errors against a team like the Crusaders is way too many. Period.

The Sharks’ driving maul gave them some confidence once it started to roll, triggering a positive response amongst the backline defenders as they stepped up to put pressure on the gainline with decent speed and accuracy on defence. For stretches the Sharks had the momentum, but they lacked penetration and couldn’t grind out points to put scoreboard pressure on the home team.

The Sharks were good at recycling the ball, despite the four turnovers conceded, they maintained possession through the phases. At one point in the game, starting around the 60thminute mark, they went through no less than 17 phases. Sadly, their direct approach simply could not breach the Crusaders’ defences, and when the inevitable happened and the ball was captured by the Crusaders, some great shifting of the ball away from the contact point by Kieran Read and Richie Mo’unga, gave Braydon Ennor the ball in space, he turned on the afterburners and scored in the 66thminute to put the result beyond the Sharks.

The final score was, perhaps, harsh on the Sharks, but they were the cause of their own demise. An old-school approach to the modern game failed them.

When muscle plays clever, clever is likely to win.

The Crusaders performance wasn’t quite as good as they have been in the runup to the quarterfinals. But they were good enough to exploit mistakes by the Sharks and to get the job done. They had to wait until the last twenty minutes for the energy to drain from tired Sharks’ legs before they could unleash the more free-wheeling style of attacking game. Right up to that moment, the Sharks would have thought that they were still in the game with a chance.

The Crusaders never quite found their flow, being harassed by Sharks’ defenders and pressured into kicking the ball to get out of their danger zone.  They were not exactly vulnerable though, they were just not being allowed to fire on all cylinders, different units that just seemed slightly off the boil at time, with their usually clockwork lineouts struggling in the wind at the start and then seeming to lose timing and confidence.

This was a Crusaders performance where they lacked accuracy, and their general handling and sharpness seemed a little off. Perhaps it was the Sharks’ pressure? Perhaps it was a bad day at the office? Whatever the cause, they were still good enough to put the Sharks away.

Those first twenty minutes will haunt the Sharks. At that critical time in the match where they could lay down a marker and tell the world that they would stand up to the Crusaders, they simply couldn’t do a thing right. Their lineout was a shambles, their midfield defence didn’t work at all, and they found every possible way to make life difficult for themselves. They allowed the Crusaders the opportunity to get their noses in front, and nobody should ever do that!

The bottom line to this game is that the Sharks’ needed to produce a perfect performance to beat the Crusaders, but made far too many mistakes in execution, played the wrong style of rugby, and did not achieve dominance in any aspect of the game. They were the architects of their own demise.

The Hurricanes will arrive in Christchurch aware of the Crusaders’ lack of accuracy and sharpness. They will believe they have the team to beat the Crusaders. Personally, I believe Crusaders are unlikely to be stopped in 2018.