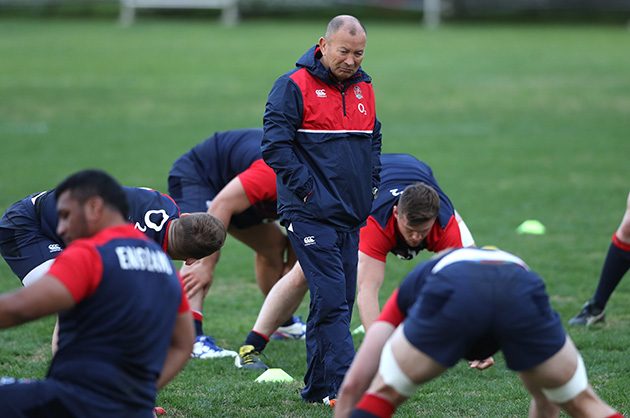 Eddie Jones has named a 36-man England squad to fly to Portugal next week for a training camp to prepare for their first Test of the November internationals against South Africa.

Jones confirmed that Owen Farrell and Dylan Hartley will be co-captains for the four-Test series.

No Room For Danny

Danny Cipriani is a notable omission from the squad. With Cipriani’s penchant for disciplinary problems and a built-in self destruct button, Jones has obviously decided that it is a case of rather safe than sorry. It is sad to see so much talent wasted.

Another regular in the squad, flanker Chris Robshaw, has required surgery to his knee and will miss the November Test series.

Yet another regular England squad member who is not available for selection is Joe Launchbury, who is out for some 10 to 12 weeks.

Both Vunipola brothers, Mako and Billy, will miss the Test series as a result of injuries picked up last weekend.

Just to further compound Eddie Jones’ problems, Nathan Hughes has had his suspension from the game increased after he rather unwisely tweeted that a disciplinary hearing was a “joke” – moments after pleading guilty and acting contrite and hugely apologetic at the hearing itself. His suspension had been reduced due to “mitigating circumstances” after his contrition and humble acceptance that he was a naughty boy. Unfortunately for Hughes, the Judicial Committee read his tweet before they had terminated their sitting, and promptly summoned him back! The “mitigating circumstances” were no longer quite so easy to justify…..

The injury to Billy Vunipola and Nathan Hughes’ suspension left Jones without his two first choice No.8s, resulting in Ben Morgan (Gloucester Rugby) being included for the first time since 2015. The 29-year-old number eight has played 31 Tests for his country with his final appearance coming against Australia during the last Rugby World Cup.

Charlie Ewels (Bath Rugby) is selected in the squad for the first time this season while Hill has been named as an apprentice.

Jones said: “I have named Dylan and Owen as co-captains for the series. They have both been excellent captains for England in the past and will provide a powerful leadership base for us on and off the field.”

On the training camp in Portugal Jones said: “We have taken a slightly different approach this year. With the World Cup in mind we are going to Portugal in the middle of next week until the Thursday of the Test week so will be back to train at Twickenham the day before we play South Africa. As well as giving the players a different experience it also gives them some rest after their club matches before joining up with England.

“The Portugal camp is about getting the team organised. The players have all been playing in different systems and with different ideas at their clubs so it’s about producing a team that is absolutely brutal in the physical contest, as the game demands, and also playing a smart English brand of rugby.

“We love Twickenham. The players feel the support and we can’t wait to get out there and play in front of 82,000 against South Africa.”

England will play South Africa (3 November), New Zealand (10 November), Japan (17 November) and Australia (24 November) at Twickenham Stadium, with the kick off for all games at 3pm, live on Sky Sports HD. England will travel to Portugal on Wednesday 24 October to begin their preparations for the four-Test series.

A 23-man squad will be confirmed on Tuesday, October 30 ahead of the Test against the Springboks on Saturday, November 3. England will fly back to London from Portugal following the Test squad announcement on Thursday, November 1st.