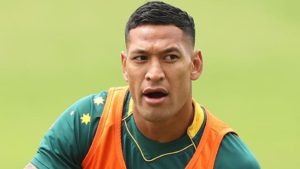 The Aussie media are suggesting that the relationship between Rugby Australia and its highest-paid player, Israel Folau, has soured following a meeting at which he insisted he would not be backing away from his social media remarks about gay people.

Afterwards Castle faced the media on her own, and had to tip-toe around questions and sounded every bit like the head of a major football code who didn’t want to be the one who lost its biggest star.

She said: “Israel acknowledged that maybe he could have put the positive spin on that same message and done it in a less disrespectful way and that’s exactly the type of conversation that we had. He understands he has caused some people some grief over this.”

Which seems to be at odds with Folau’s own version of the truth. Folau apparently told Castle he wasn’t worried about “positive spin”. He refused to guarantee he wouldn’t make such comments again and will walk away from the game if necessary. The most important team in his life is “Team Jesus”, as per his Twitter account.

There are also suggestions that Folau is rapidly losing interest in Rugby Union, as the Aussie rugby league is apparently ready to make some large offers to the star when his contract expires at the end of this year.  NRL chief executive Todd Greenberg apparently asking league club bosses at their annual conference on the Gold Coast how would they deal with Folau’s controversial comments.

Raelene Castle, acknowledged as much.

“I know there will be a lot of other sports out there looking to see how this plays out to see how we work through this particular issue,” Castle said.

“Israel’s presented his situation to us and where his views are and his beliefs are and we’re proud of the fact he’s a strong believer and he’s prepared to stand up for what he believes in and we want athletes in our code that are prepared to do that. That’s really important.

“At the same time Rugby Australia has got a policy in a position of inclusion and using social media with respect. We shared stories, and ideas and positions and both of us recognise that what we want is a situation where we use our social media platforms in a respectful and positive way.”

Pressed on contract talks with Folau, she said: “We’re in a negotiation with Israel to extend and we’d really like him to stay in rugby, that’s hugely important to us. He’s a great player, he’s delivered some great outcomes for us and he’s been a really strong role model in the Pasifika community and we would like to see that he stays in rugby but we also know he’s an athlete that is in demand and there is going to be other people looking to try and move him. We’ll be putting our best foot forward to make sure he stays in rugby.”

Folau seems to have responded to the furore over his comments by assuming the mantle of the persecuted, tweeting a Bible verse from Matthew 5: “Blessed are they which are persecuted for righteousness’ sake: for theirs is the kingdom of heaven.”

“Blessed are ye, when men shall revile you, and persecute you, and shall say all manner of evil against you falsely, for my sake.”

The opinion he expresses is his own, based on his personal religious beliefs. He has an inalienable right to his opinion. Whilst he has every right to think, and even say whatever he likes, I am not sure that assuming the mantle of the persecuted absolves him from persecuting those whom he so obviously disdains.