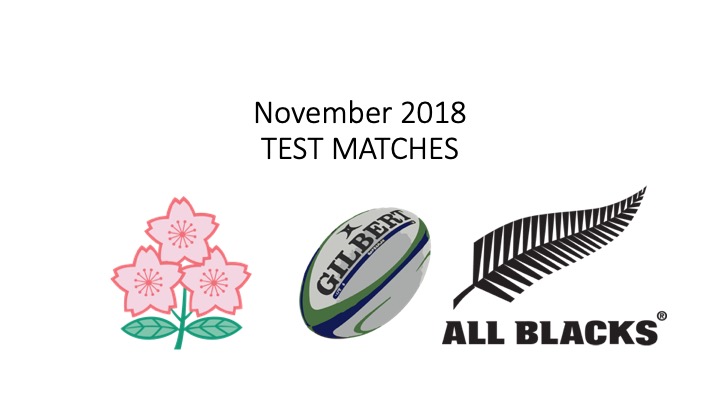 What on earth do they think the All Blacks are “experimenting” with?

Back in the good old/bad old days when international teams went on tour they often had to field two teams in any one week. The touring squad would soon sort itself into two distinct teams, Wednesday team – sometimes referred to as the “dirt-trackers” – and the Saturday or Test team. Never once did anyone refer to the Wednesday team as an “experimental” outfit. They were simply the other team that did duty in the lesser or midweek games.

Sometimes the “Wednesday” team had to play Test matches too – When South Africa played Wales earlier this year, the game was given full Test Match status, despite the “experimental” nature of both teams!

Over in Japan, the All Black dirt trackers will play a Test against Japan. Suddenly the “other” All Black team somehow are deemed to be an “experimental” outfit.

From my point of view, the only experiment that we will witness in this game will be the first use of the new All Black jersey. There has been a whole heap of hype around the revelation of the new jersey.

Made by Adidas, we are told that it is an industry first for a rugby jersey. You see, the All Blacks jersey was made with “seamless woven” technology.

We are told that the new jersey was designed and manufactured over an 18-month period with input on design and performance from group of senior All Blacks including Kieran Read, Beauden Barrett, Samuel Whitelock and Sonny Bill Williams. (Fashion gurus, one and all!)

Apparently the new jersey has seen the elimination of seams to remove weak points and reduced the overall weight of the jersey by 25 percent.
In a nod to tradition the white collar, last seen in 2014, is back. But it is not really a collar, just a white strip at the top of the back of the jersey. This “collar” is said to sit lower than normal, making it harder for opponents to grab and is clean bonded from the body for a minimalist style and fit.
Oh, and the jersey construction was fully automated which is said to provide unparalleled fit, strength and speed. (So a jersey is somehow going to make the Ioanes, Smiths, and McKenzies of the world faster????)
This new jersey has “zonal mechanical stretch”, stability zones and a bonded hem that all further reduce material movement particularly during lineouts, scrums, mauls and other live match scenarios.
Yep, it is an all new, experimental jersey.

And that is about the most exciting thing that I can say about the Test match that looms this weekend. The All Blacks have a new jersey………….

Japan, after a 31-28 loss to a World XV last weekend, now have to play the All Blacks. Given Japan’s current form and depth, they must be considering themselves lucky to be playing against an “experimental” team? On top of that, they have to deal with the prospect of facing a new jersey too!

Japan have made just one alteration to the starting line-up for their Test against the All Blacks in Tokyo on Saturday.

Jamie Joseph has been forced to make a change to his run-on side which with Ryohei Yamanaka coming in at full-back for Lomano Lemeki, who is injured.

The Brave Blossoms will be captained by blindside flanker Michael Leitch.

Luke Whitelock will captain a new-look All Blacks side when they take on Japan in Saturday’s Test in Tokyo.

Whitelock, who captained the All Blacks against a France XV last year, will captain the side for the first time in a Test.

Whitelock becomes the 70th All Blacks Test captain and follows in the footsteps of brother Sam, who also captained the All Blacks for the first time last year.

Two debutant All Blacks have been named in the world champions’ starting XV – flanker Dalton Papalii and centre Matt Proctor.

It will be the second appearance in the black jersey for Hunt and Drummond who played the non-Test fixture against the France XV on last year’s end-of-year tour.

This might be an All Black selection that features some of the less regular All Black players, but it is still a New Zealand team, and they are still ranked No.1 in the world, no matter who pulls on the new Adidas jersey. They are playing against Japan, ranked a lowly 11th in the world.

Whichever way you look at this game, it is pretty much a foregone conclusion. Japan have made some progress in recent years, even beating a woeful Springbok outfit in 2015, but that is not really any measure for what awaits them when they face the All Blacks.

Despite the “experimental” tag that has been attached to the team, this is still an All Black team, and it is still a team that bristles with talent and firepower. Think of Dane Coles, Richie Mo’unga, Waisake Naholo, Nehe Milner-Skudder, Jordie Barrett, Ngani Laumape, Luke Whitelock, Vaea Fifita, Patrick Tuipulotu,  and Ofa Tuungafasi. These are recognised All Blacks that can and do start Test matches against the biggest and the best in the world.

They all know how to play Test rugby, the All Black way.
Japan’s only chance would be in trying to play a brand of rugby similar to that of their much-maligned Super franchise, the Sunwolves. Jamie Joseph has just stood down as Sunwolves coach and stepped into the fulltime role of Japanese coach, and there can be no doubt that he will want his Japanese Cherry Blossoms to play the Sunwolves style high-risk, high-tempo, ball-in-hand game in an attempt to run the All Blacks ragged.

I cannot really see that happening.

The All Blacks just have too many big guns, together with some youngsters who have dreamed of wearing the famous black jersey since they first became aware of the difference between day and night. There will be nothing “experimental” about the way they will play their rugby.

The All Blacks, by 35 points or more.