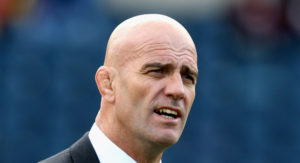 We are told that Bulls head coach John Mitchell has requested R90-million from the Bulls’ Board of Directors in order to recruit some high-end talent.

He has also refused an extension to his coaching contract beyond the end of the 2019 season, perhaps as some kind of bargaining chip – “If I don’t get my R90 Million, I am outta here….”

Mitchell is said to be concerned with the lack of depth in the Bulls squad, and the damage that is being done to promising youngsters by throwing them into the deep-end of Super Rugby too early in their careers.

“We have got a very good process and very good systems.

The Bulls are reportedly targeting Springbok No.8 Duane Vermeulen, retired hooker Schalk Brits, Frans Malherbe, Jean-Luc du Preez and Wandisile Simelane to bolster the quality of the squad. They recently missed out on the signature of Lions flank Cyle Brink, who was said to be close to joining the franchise.

Mitchell is also after a full-time defence coach for next year’s Super Rugby season.

Mitchell wants complete control of the high-performance programme and complete support from the Bulls’ Board of Directors on his strategy.

Members of the board are reportedly not happy with the request after this year’s performance. The Bulls finished the Super Rugby season in 12th position overall, with six wins and 10 losses coming in last in the South African conference.Money is tight across the entire rugby world, and the Bulls’ fans have not provided much in terms of gate money to help fund Mitchell’s demands.

Maybe, just maybe there are some cracks starting to appear in the relationship between Mitchell and the Board? This will not be the first time that Mitchell’s demands and desires do not match up with the demands and desires of those who sign his pay-cheque.