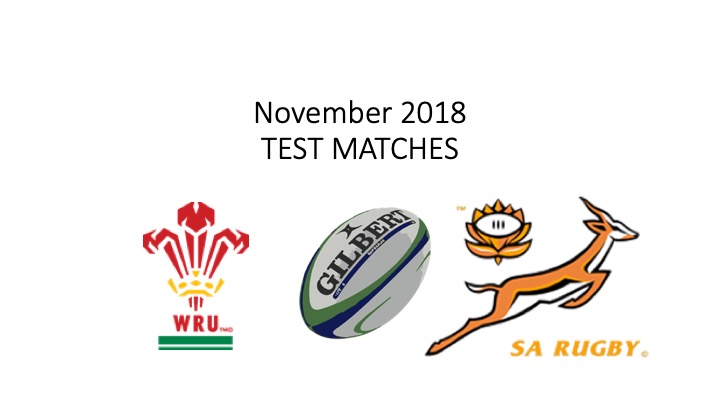 Rassie Erasmus is saying that Wales will represent South Africa’s “most difficult opponent” of the November Tests when they host the Springboks on Saturday.

There is some truth to that statement.

Wales are the 3rdranked side in the world, in terms of World Rugby rankings they are third behind Ireland, who are on 91,17 points after their win over New Zealand. Wales are on 86,70 points, just ahead of both England on 85,54 and fifth ranked South Africa on 85,12. Wales are also on an eight-match winning streak – and they also have won their last three matches against the Springboks! In fact Wales have lost just two Tests since they last played the Springboks back on the 2ndDecember 2017. They won that test by 24 to 22.

Since that win over the Springboks, Wales have only lost 12 – 6 to England at Twickenham on the 10thFebruary 2018, and then on 24 February to Ireland 37 – 27 at the Aviva Stadium. With just those two losses, Wales have beaten Italy, France, South Africa, Argentina (twice), Scotland, Australia, and Tonga.

Whichever way you look at Wales, they are in a good place at the moment.

In seasons past the Welshmen have often struggled with depth. Their first choice players are usually of world-class standard, but their second-stringers have frequently struggled to maintain the same level of rugby and consistency as the top squad.

Things have been a bit better in 2018. The second-stringers, call them the reserves if you will, have stepped up to the mark, beating the Springboks, admittedly also a second string Springbok outfit, in Washington DC, and then despatching Argentina in two Tests in June, before notching up 70 points over Tonga last week.

Warren Gatland has said that Wales now have some 40 players to choose from, with a number of of young and fringe players coming through the Welsh club ranks and joining the national squad.

With their run of 8 consecutive wins and 10 wins from 12 starts, it is no wonder that the RugbyPassIndex suggests that Wales have a 72% chance of beating the Springboks at Cardiff’s Millennium Stadium on Saturday.

Their chances are perhaps enhanced by the fact that the Springboks are at the end of their extremely long and arduous rugby season. This Test represents a “last day at the office” for the majority of the players, before they head off for a well-earned rest, a week or three before they have to report to their Super Rugby franchises for pre-season training as the 2019 season looms!

The fatigue that has been evident amongst all the southern hemisphere teams during this November Test season will certainly be a factor when the Springboks take the field at the Principality Stadium in Cardiff, a venue where they have not won since 2013.

We shall have to wait and see whether that fatigue and, possibly, a one-foot-on-the-plane attitude has an effect on the Springboks. They will certainly have desire on their side. The desire to end the year on a high, the desire to break the Cardiff hoodoo, the desire to beat Wales after three straight losses, the desire to move up above England in the World Ranking……

The record book says that Wales have the right to be confident. Springbok pride might have it differently.

Wales coach Warren Gatland has made 14 changes to his starting line-up for their Test against South Africa at the Principality Stadium on Saturday. That sound like an awful lot of changes, but it is really simply a rotation of the second-stringers back to their places in the stands and on the bench, while the first team steps up to the mark.

In reality, Wales have made just one change to the side that beat Australia 9-6 a fortnight ago.

Liam Williams, who won his 50th cap against Tonga last weekend, comes into the starting XV replacing Leigh Halfpenny at full-back who is ruled out with concussion.

Williams lines up in the backline alongside fellow British Lion George North and Josh Adams.

Scarlets duo Hadleigh Parkes and Jonathan Davies are named in the midfield with Gareth Davies and Gareth Anscombe continuing their partnership at half-back.

In the pack Nicky Smith, Ken Owens and Tomas Francis are again named in the front-row with Adam Beard lining up alongside captain Alun Wyn Jones.

Dan Lydiate, Justin Tipuric and Ross Moriarty pack down in the back-row for a third time together this autumn.

Rassie Erasmus has retained his winning recipe for the final match of the Springboks’ end-of-2018 tour.

An unchanged Springbok starting side will take on Wales in Cardiff on Saturday.

There is just one change amongst the replacements, where Eben Etzebeth is set to provide impact off the bench. The experienced lock has recovered from his calf problem and comes into the 23-man squad in place of Lood de Jager.

As I sit looking at the two teams on paper, and their respective records in 2018, and in this November International window, I have to consider that Wales have an exemplary record in 2018, but that they stuttered and stumbled against a woeful Wallabies two weeks ago.

I have no doubt that ring-rust was partly to blame for their disjointed and somewhat pedestrian effort against the Wallabies, and the old adage that “you only play as well as your opponents allow you to play” must also be considered. Did the Wallaby errors and mistakes drag the Welsh effort down a couple of notches?

On the Springbok side, they have had mixed results this November. They have lost to England, a game they should have had tied up and sealed in a vault before the half-time whistle sounded. They beat France with a last gasp effort, the culmination of ten minutes of supreme effort, and then they did a tidy job of beating a competitive and feisty Scotland last weekend.

The Springboks are a young team that is rapidly learning how to close out matches. Fatigue may be an issue, especially later in the second half, but this is a team that is gelling into a solid outfit.

At the risk of becoming cliched, this game will be won and lost up front.

The Springboks bring their huge tight five into the final game of the season, with an exemplary record for establishing and maintaining a hold over the forwards that oppose them. The starting five are backed up by some very big men in Bongi Mbonambi, Thomas du Toit, Vincent Koch, and the powerful Eben Etzebeth is back waiting to come off the bench.

These big forwards are not your usual trundling heavy artillery, they are a highly mobile bunch that will look to take the game straight at the Welsh forwards and into the midfield. The Welsh tight five of Smith, Owens, and Francis in the front row with Jones and Beard in the second row will have their work cut out to handle, and perhaps subdue, the power of the Springboks.

The match-up between the loose forwards will be interesting, with the class of Tipuric and Lydiate against Kolisi and Du Toit – the four flanks will look to battle it out in all phases of the game, with the Springboks perhaps a half a meter slower, but bringing far more muscle into the collisions. The relative youth of 24-year old Ross Moriarty wearing No.8 for Wales will have his hands full with the 32-year old Duane Vermeulen, with the latter bringing his experience, tactical nous, his physicality and mongrel to the game. Moriarty is not one to shy away from the physical stuff, but he will need to focus on the ball rather than the man.

The back threes of the two teams look evenly balanced, although Wales may miss the calm of the injured Leigh Halfpenny at full-back. Liam Williams is no slouch at 15, many felt he was unlucky to miss out on a starting spot against Australia, and he does have some serious firepower on either side of him in George North and Josh Adams. Whilst Halfpenny might be the cooler, calmer fullback, Williams brings playmaking skills and the ability to finish into the mix. They face off against the silky playmaking of Willie le Roux and the sparkling adventure of Nkosi and Dyantyi. Both Adams and North are probably better defenders than their two South African opponents, but the two Springbok youngsters have an uncanny ability to turn a half-chance into something.

The midfields both look solid, De Allende and Kriel are gelling into a very solid combination, while Davies has a very good defensive reputation, although some questions have been asked of Hadleigh Parkes’ defence. Parkes is a clever runner and distributor, which outweighs his defensive issues.

The flyhalf tussle will be interesting too, the calm game management, tactical nous, and flat gain line attack of Pollard versus Gareth Anscombe’s steadfast defensive abilities. Anscombe also has the ability to get his backs moving on the front foot, although his out of hand kicking was a little iffy against both Scotland and Australia. Dan Biggar is on the bench if Anscombe misfires.

Gareth Davies is vastly more experienced than his opponent Embrose Papier, but then so is almost every other scrumhalf in world rugby. Papier has started just one Test. Davies has 35 Wales caps to his credit, along with 109 for the Scarlets and another 75 for Llanelli. Some are saying that he is a little fortunate to get the call-up ahead of the likes of Tomos Williams and Aled Davies, but recent club form suggests that he is finding his “A” game again.

On paper, the two back divisions appear quite evenly balanced.

But up front amongst the big men, South Africa just seem to have the edge.

The last game of a long long season is never easy. The one-foot-on-the-plane syndrome kicks in, the fatigue, the pain, the aching joints, and the slowing synapses all contribute to making the final Test very hard work for anyone.

The Springboks will have to dig deep inside themselves to find the will to finish their year on a high.

They have shown that they can do it.

On paper South Africa have the team that can end the three-game losing streak against Wales.

Saturday will be a supreme test of their will.

Wales have a great record in 2018. They are a very good team, but the rusty display against the Wallabies, without Saturday’s starting XV getting the chance to smooth the edges against Tonga, suggests that they have not quite got their game together yet. It may take them a while to gel into a working outfit.

And that is why I am going with a South African win.

The Springboks, by some 12 points.