Home Super Rugby One Week To Go! Who Will Make It? 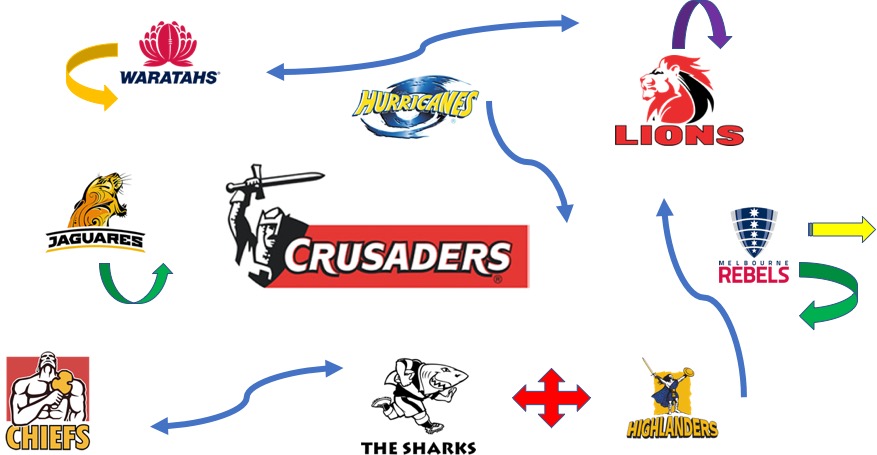 One Week To Go!

Who Will Make It?

With just one week to go before the regular Super Rugby season ends and the playoffs begin, who has made it, and who might still make it?

Unusually, with one week left to play, all of the above could change. 2018 provides a host of alternatives!

Well, almost all of the above could change. Nobody can knock the Crusaders out of the top spot. They are on an unassailable 58 points.

Down below them things can change a lot.

The Lions, however, are still vulnerable. They can be overhauled by the Jaguares, if the latter beat the Sharks in Durban on Saturday and the Lions lose to the Bulls at Ellis Park. The Lions have 41 points, the Jaguares have 38. The Jaguares could move up to 42 or 43 points, giving them the conference title if the Lions lose. If the Lions beat the Bulls nothing changes, they stay at the top of the SA Conference.

The 2nd and 3rd Conference Winners’ Seeding spots may swap as well. If the Lions win and the Waratahs lose to the Brumbies, the Lions could pass the ‘Tahs on the log.

All that such a result would change is who they play in the quarter finals.

Let’s look at how things can change

The Crusaders have a home quarter-final, that will not change.

Their opponent could. The Rebels are currently in the eighth spot but face an away game against the Highlanders in Dunedin. A defeat for the Rebels, and a win for the Sharks against the Jaguares could see the Durban side make the trip to Christchurch instead. The Brumbies could also conceivably sneak into eighth spot with a win over the Waratahs and defeats for both the Rebels and Sharks.

The Highlanders, if they lose to the Rebels could also still fall to the eighth spot.

The Waratahs have a home playoff spot, that will not change. But they could drop to third with a defeat to the Brumbies and a Lions win over the Bulls. The Jaguares seem the likely opponent in the quarter-finals, but the Rebels could beat the Highlanders and change the mix.

The Lions still hold top spot in the South African Conference but that could change, depending on the weekend’s results. The Lions finish their regular season against the Bulls, the bottom placed team in South Africa. For the Jaguares to take the top spot they’d need a win over the Sharks in Durban and for the Lions to lose to the Bulls at Ellis Park. As matters stand, the Lions are set to face the Highlanders, who currently sit in sixth, who will finish at home against the Rebels on Saturday. The Lions could also move up into second with a win and a Waratahs defeat, but they could also drop as far as seventh.

The Highlanders seem locked into sixth spot and a trip to either South Africa, Argentina or Australia awaits.

This fixture is pretty much locked in. The Chiefs could take home advantage with a 23-point or better win over the ‘Canes in Hamilton on Friday. But it seems very likely these two teams will meet a week later in Wellington.

Lions lose to Bulls, Jaguares beat Sharks, Highlanders lose to Rebels. That would mean the Jaguares would take the SA Conference top spot, then the Lions, Highlanders and Rebels would be battling for the sixth, seventh and eighth spots.