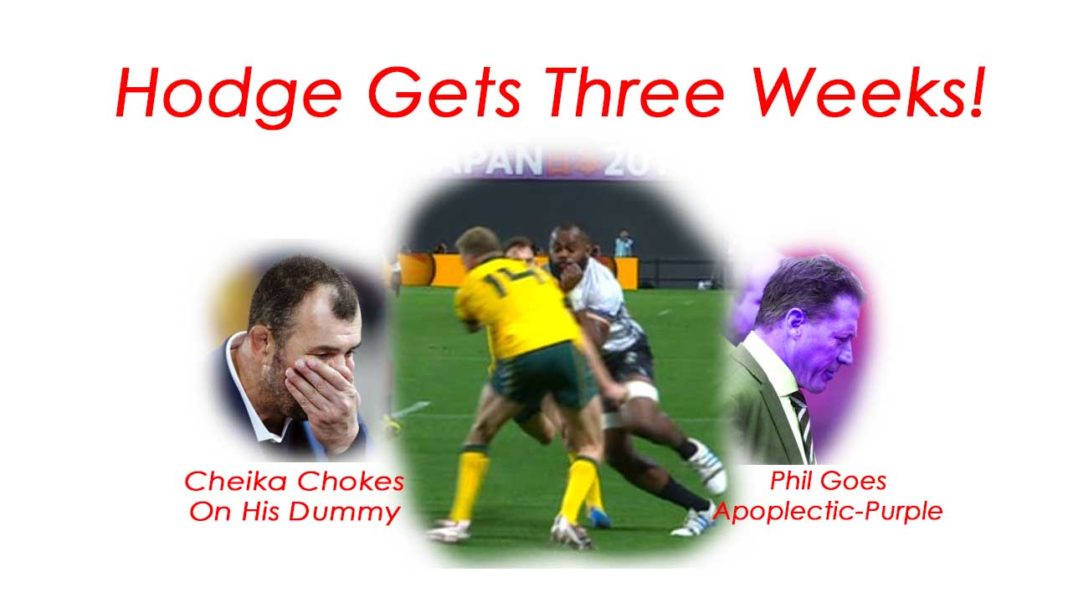 Wallabies wing Reece Hodge has been suspended for three weeks by the World Rugby judiciary for a dangerous tackle on Fijian flanker Peceli Yato.

The 25-year-old was cited for his hit on Yato in the 25th minute of their Rugby World Cup clash and faced a World Rugby judicial hearing on Wednesday.

The World Rugby judicial hearing at a Tokyo legal office lasted for close to four hours.

It was deemed the entry point for the offence was six weeks, which was reduced to a somewhat lenient three weeks by the tribunal.

Hodge will miss Australia’s three remaining pool matches. The suspension will end at midnight on October 11 after which he is free to resume playing.

In considering all the available evidence, including multiple broadcast angles and submissions from Hodge and his legal representative, the committee deemed that the incident was an act of foul play and warranted a red card in line with the high tackle sanction framework. In following the framework, the committee determined:

Given the above outcomes, the committee determined that the act of foul play warranted a red card.

The committee applied World Rugby’s mandatory mid-range entry point, which was introduced in 2017 to mitigate the risk of head injuries, which according to World Rugby’s sanctions table, carries a minimum six-match suspension.

Having acknowledged Hodge’s exemplary disciplinary record, good character and conduct at the hearing, the committee reduced the six-match entry point by three matches, resulting in a sanction of three matches.

The player has the right to appeal the decision within 48 hours of receiving the written decision.

Michael Cheika was not able to speak coherently when he heard the news, choking on the dummy he was trying to spit.

Arch-Aussie Jingoist Phil Kearns turned purple after hearing the news, especially after he had suggested that the decision to cite Reece Hodge for the dangerous tackle as “the biggest load of tripe that we have seen in world rugby for a long time”.

Kearns, taking a leaf from the Donald Trump playbook, claimed the citing was media-inspired.

“Reece didn’t have time to get his arms up properly.

“He was trying, you can actually see it in the action, and look who gets poleaxed more than anyone – Reece Hodge.

“That’s embarrassing for World Rugby that they’d even consider that.”