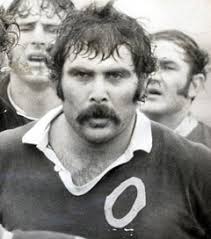 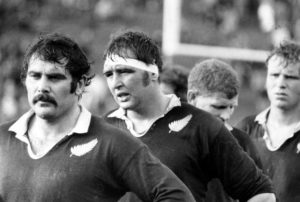 Way back in the distant past of my rugby consciousness there was a man. A rugby player, with an aura that enthralled us all.

His name was whispered in slightly awestruck admiration, fear perhaps, but certainly with a kind of hero worship usually reserved for the giants of the game.

Keith Murdoch was a prop forward, a very good prop forward by all accounts. Certainly good enough to play for the All Blacks! What made him different was the impression he gave to one and all. Nobody had the same brooding anger, the same slightly ominous presence, the aura of Keith Murdoch. Dubbed “Wild Man” Murdoch by the media, he seemed to us, the impressionable youth, to be some mythical beast of the front row.

Back in those early years of the 1970’s we thought he was the ultimate All Black rugby player. Somehow, in our teenaged minds, he was what every rugby player aspired to be. Someone with presence, with that aura that simply suggested that you did not want to tangle with him. Someone who could chill an opponent with a stare.

Keith Murdoch has died, at the age of 74.

He leaves behind many myths, legends perhaps.

I daresay much of the myth we ascribe to him was not real. We are told that he was actually a very private, shy person who eschewed the limelight. Yet he also had a wild streak in him.

Murdoch, a prop who played 27 matches for the All Blacks from 1970 to 1972 – including three tests – is the first All Black to have ever been sent home from a tour for disciplinary reasons.

After scoring the only try in the All Blacks’ win over Wales in 1972, Murdoch was involved in a fight at a Cardiff hotel, being sent home from the tour by All Blacks management.

New Zealand scribe Tony Johnson says of Murdoch: “No All Black has ever been shrouded in mystery quite like Keith Murdoch.”

“The hardest thing is separating fact from fantasy, and the reality is that very few people are still around who can.”

When Murdoch was sent home from the tumultuous All Black tour of 1972-73, he was put on a plane back to New Zealand…… and never arrived there.

We can piece together some of the mystery. He disembarked in Singapore, flew to Australia, and stayed there for the rest of his life, living a reclusive life in the outback of Australia, amongst the shadows and avoiding all attempts by his All Black colleagues, by the media, and anyone else who tried to get him back to New Zealand for a reunion. He shunned the media when they offered to write “his side of the story” and, to all intents and purposes, disappeared. He lived the rest of his life farming cattle on his remote Camfield cattle station, about 450km south of Darwin. 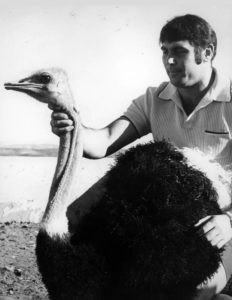 When Murdoch became an All Black in 1970 he already had a reputation, mostly concerning his huge frame and immense strength, stories that grew into legends as they were told and retold.

Some tell of a friend’s car that broke down. Murdoch’s car had no tow bar, but they did have a tow rope, so he simply wrapped his end of the rope around his massive forearm and drove off, towing the broken down car behind him.

Another story about his strength and toughness includes one of the toughest of them all, the legend that is Colin Meads.

During the trial matches for the selection of the squad to tour South Africa in 1970, Murdoch was in Meads’ face, constantly niggling and teasing the big man.  Eventually Meads had enough of Murdoch and threw what he described as “a pretty good punch,” catching Murdoch flush on the chin. Keith Murdoch did not even blink, and Colin Meads had a cracked knuckle!

Murdoch’s tour to South Africa was dogged by misfortune.

He ended up in plaster after a broken ankle, but did make a strong return late in the tour, demolishing former Springbok prop Ronnie Potgieter in the Northern Transvaal game. His performance earned a place in the final test, which he played despite constant pain from an infected appendix.

The stories, the legends around Keith Murdoch continued to grow. He did not play during the ’71 Lions tour, withdrawing from the Otago team just hours before kick-off with a rib injury, although again the stories raged, one suggesting that he missed the game because he had fallen asleep on a fishing trawler and woken up at sea, forcing him to send a radio message to withdraw his name from the team sheet.

He also withdrew his availability for the All Blacks, leaving them with an unbalanced front row that was fully exploited by the Lions.

His absence merely stoked the fires in the media.

By the time the All Blacks went to the UK for their tour in 1972, Murdoch was being portrayed as the caged wild man, and he was already at odds with the team manager Ernie Todd.

“He really didn’t like Keith” recalls Tane Norton, “He thought he was uncouth”.

Ian Kirkpatrick puts it more bluntly: “He had his digs into Keith from the start”.

Murdoch, Todd, the media, and the Welsh in particular, were on a collision course, and it came to a head in Cardiff on December the 2nd 1972.

The All Blacks had won the Test at the legendary Cardiff Arms Park, thanks to a solitary try by Murdoch and 5 penalties.

The Welsh were bitterly disappointed, they had believed they could, would, and should win the Test. They’d fallen short, thanks to a disallowed JPR Williams try and some nervy, errant kicking by flyhalf Phil Bennett.

The after-match dinner did little to ease tensions, with the older Welsh brigade especially unhappy after the events of the afternoon. To compound the ill-feeling, Wales players were given free access to the bar, while the All Blacks had to pay for their drinks.

In his recently published book Behind the Silver Fern, Bob Burgess describes how Murdoch was goaded by one of the Welsh front-rowers who repeatedly questioned his ability and his intelligence, calling him, amongst other things, thick. Burgess was surprised Murdoch didn’t lash out then and there. Somehow he kept his cool.

In the end, the All Blacks went back to the Angel Hotel to celebrate amongst themselves.

At one point in the evening, security staff took exception to the noise levels generated by the All Black celebrations, and accompanied by a German Shephard straining at its leash, entered a room where some of the players were partying and told them to break it up.

At around 1am, Murdoch went into the hotel kitchens looking for something to eat, where he was again confronted by security staff, especially one named Peter Grant, who ordered him to leave.

An argument began, and both the manager and other players were summonsed to try and quell the situation.

Prop Graham Whiting claimed to have quietened things down, before an “under the weather” Todd burst into the room, and without hesitation announced “that’s it Murdoch, this time you’re going home”.

According to Whiting, it was then that Murdoch decided that if he was going home, then he was going to make it worthwhile, and flattened the security guard, Grant.

The All Black players were adamant Murdoch had been provoked by the Welsh in general, and in particular the security guard, who spent some months dining out on his story of the Murdoch punch.

After some internal wrangling and many discussions, manager Todd decided. Murdoch was going home.

Except that he never arrived back in New Zealand.

In 1979 Murdoch was credited with saving the life of a young girl, who got into difficulties in a Timaru swimming pool, but again, he left before any reporters could get near him to talk about it.

In 2001, Murdoch was called as a witness to the mysterious death of an aboriginal man whom Murdoch had earlier caught trying to break into his house.

Christopher Limerick was found dead in an abandoned mine, and whilst Murdoch was not officially a suspect, there was inevitable speculation, particularly as police took some time to track him down to interview him.

He spoke to a New Zealand Herald reporter long enough to deny any involvement, and did appear in court, where no charges were laid due to a lack of evidence.

To a man, his team mates on that 72-73 tour will tell you of a great team-man, a man of few words, a player of immense strength, certainly no angel, but not quite the monster he is portrayed as.

A man not so much likely to start trouble, but certain to end it once it had started. A man who could be egged into trouble by others, and a man who constantly had to deal with drunken fans trying to bait him into a fight.

He is gone now, and the mystery that was Keith Murdoch will live for as long as rugby people gather.

May he finally find the peace that he was looking for.