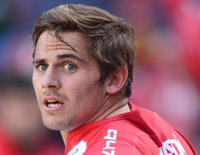 Sale Sharks have confirmed the signing of Rohan Janse van Rensburg from Super Rugby’s Lions on a three-year deal.

The 23-year-old began his professional career with the Blue Bulls in 2013, making seven appearances and scoring four tries before heading south of the Apies River to join the Lions in 2015. His breakthrough season was in 2016, which saw Janse van Rensburg cross the line 10 times in just 17 games.

In 2016 Janse van Rensburg was selected for a Springboks XV in a non-cap friendly against a Barbarians XV in which he scored a last-gasp try to secure a 31-31 draw. He was later included in the Springbok squad for their 2016 Outgoing tour to Europe. He started the final game of the tour against Wales at inside centre where the Springboks lost.

Arriving at Sale in November 2017 on a short-term contract as cover for the injured Johnny Leota and Will Addison, Janse van Rensburg made an instant impact, scoring three tries in the eight games he played.

On his return to South Africa he returned to the Lions squad for the Super Rugby season, but struggled to hold down a starting position in the team, usually playing off the bench. He was also used out on the wing before being sidelined with an ankle injury in May.

Janse van Rensburg has been released from his Super Rugby contract with immediate effect, and will join up with Sale Sharks for Pre-Season Training in advance of the 2018/19 Gallagher Premiership campaign.