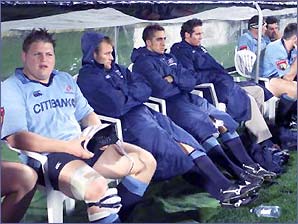 Rolling substitutions were available to coaches for the first time in senior professional rugby in South Africa in the SuperSport Rugby Challenge, which kicked off with six matches this past weekend.
This decision to allow the innovation was taken following workshops held by SA Rugby’s referee department in Johannesburg and Cape Town with the SuperSport Rugby Challenge head coaches from all the provincial unions, where this experimental amendment was unanimously aopted.
Teams are allowed to use 12 rolling substitutions during each match, of which four must be reserved for players in the front row.
At the workshops, it was also agreed that any team that causes uncontested scrums, will be reduced to 14 players on the field until the end of the match.

Coaches will have the option of selecting four or five forwards on their seven-man bench.
SA Rugby said: “The decision to allow rolling substitutions, which we’re already using in our Under-19 Provincial Championship, was done with player welfare and safety, especially at scrums, as well as reducing the likelihood of uncontested scrums to protect the integrity of the game, in mind.”

The use of rolling substitutions will eliminate the practice of faking an injury to a substitute prop, or faking a Head Injury Assessment if some other substitute player gets injured on the field of play.

In the past, if a substitute player gets injured on the field, he cannot be replaced by the player he replaced, the team has to deploy one of the other substitutes on the bench. That could result in a specialist prop having to substitute for a scrumhalf, as silly as that may sound. If the permissible number of subs has already been used, the injured player cannot be replaced, and the team will play on with 14 (or less) players on the field.

Whilst the innovation solves the problem of injuries depriving a team of adequate playing numbers and thus potentially destroying the game as a fair contest, it does bring about a possible negative impact too.

If a team has worked especially hard to establish domination in one or another aspect of the game, the opposition can disrupt that domination by constant substitutions of the players who are struggling, giving them a breather while somebody else sucks up some of the pressure, before redeploying the initial player again. A conveyor belt providing a constant supply of fresh legs and different techniques to disrupt the dominance…..

In American Football the game has reached a stage where each match-day squad consists of at least two teams: the offensive or attacking unit, and the defensive unit. They also have specialist players who are reserved for particular moments in the game. A specialist kicker, a specialist kick-receiver, and the like. The kicker is only sent on to take goal kicks, perhaps to handle the kick-off too.

Is rugby slowly but surely heading in that direction?

I hope not! Rugby is about all-round skills! We want to see players with multiple skills and instincts, not just some behemoth tackler who specialises in flattening an opponent and has no idea what to do with the ball in hand!

(We have already got a couple of specialist attackers who have no idea what to do if someone kicks the ball onto them, or how to tackle an opponent. Raymond Rhule, Courtnall Skosan………..)