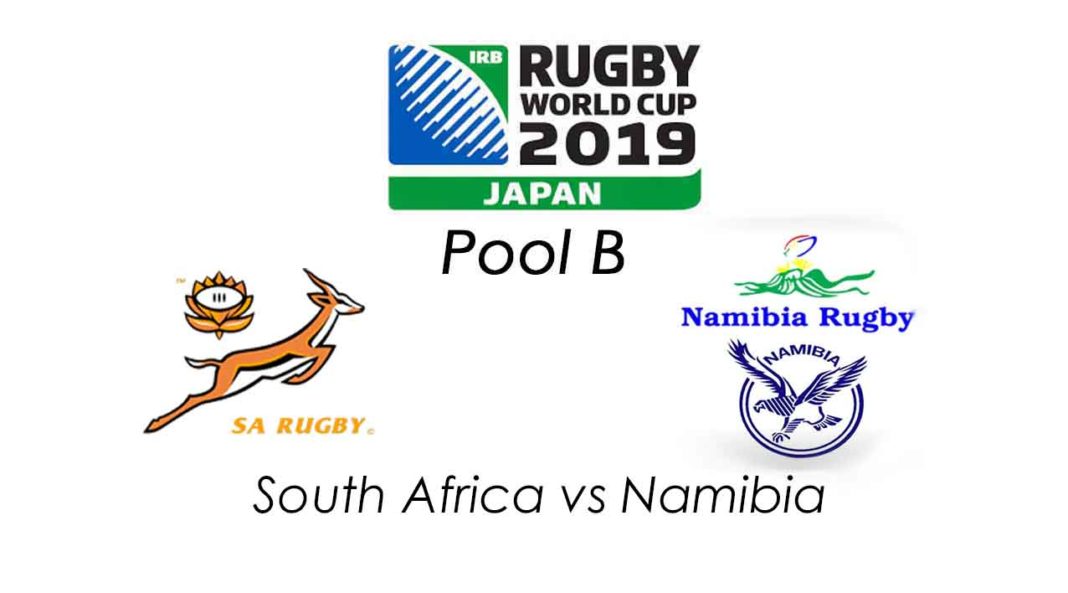 Neighbours, some might even say brothers, face off against each other on Saturday as the Springboks and Namibia take to the field in Toyota City.

There are many commonalities between the two countries – they share a boundary; they share the West Coast of the southern African continent; they share languages, traditions, and even family ties. (I have family who were born, live and work in Namibia.)

Many of the Namibian team ply their trade as professional rugby players in South Africa where the likes of squad captain Johan Deysel played for the Sharks until the end of the 2018 before heading to Colomiers in France. Torsten van Jaarsveld plays for and captains the Free State Cheetahs, although he has not been selected for this particular match. Some others, such as Johan Tromp, JC Greyling, Johan Retief, Louis van der Westhuizen, Janco Venter, Rohan Kitshoff, and Wian Conradie either have played or currently play rugby for South African teams.

The cross-pollination of ideas and styles is inevitable as both teams found their game in the same domestic environment.

Despite the many similarities mentioned above, when it comes to rugby resources and facilities, that is where the story ends. Namibia is truly one of the minnows of World Rugby, with just 8 192 registered rugby players of all ages and genders. Their southern neighbour has 405 438 registered players. All the South African rugby players are full-time professionals, many of the Namibian players are amateurs.

We shall not even talk about resources – the clubs, the universities, the rugby academies, the stadia, the support infrastructures, the professional coaching bodies. South Africa has it all. Namibia, not so much. Even their national coach, Phil Davies, commutes in from the north when he needs to work with the team.

There simply can be no comparison between the two.

Whichever way we look at it, it is the kid brother taking on his much older, more experienced, better equipped, and bigger sibling. And the kid brother has to do this with one hand tied behind his back.

Which also suggests that the result of this clash is a foregone conclusion.

However, South Africa will be well aware of the dangers inherent in such “foregone conclusions”……..

They are visiting Japan, and nothing more than a whisper of their host’s name is required to remind them of another “foregone conclusion” in Bristol some 4 years ago!

South Africa have the luxury of being able to rest their “A” team and deploy their reserves for this one. Only two of the team that started against New Zealand last Saturday will take the field for the kick-off this week. Lukhanyo Am and Makazole Mapimpi are the two that get a second run. The rest of the starting team is a reflection of the depth that the Springboks have available in their squad.

The reserves from last weekend’s game get a chance to start, with Frans Steyn, Herschel Jantjies, Francois Louw, RG Snyman, Bongi Mbonambi, and Tendai Mtawarira all kicking off this game.

Others are getting a much needed run, with Vincent Koch and Lood de Jager looking to lay down a marker for the bigger games that lie ahead. Sbu Nkosi will also be looking to remind his coach of the class he showed during the Rugby Championships.

However, just in case they need to, the Springboks have the heavy artillery sitting on the bench, with Steven Kitshoff, Eben Etzebeth, Siya Kolisi, Franco Mostert, Damian de Allende, and Cheslin Kolbe waiting for a call. They are backed up by the replacement for the unlucky Trevor Nyakane, Thomas du Toit, and third scrumhalf Cobus Reinach.

Much like South Africa, Namibia have made a host of changes to their team for this game. There are 10 changes from the starting line-up who lost 22-47 to Italy last Sunday.

Only captain Tjiuee Uanivi, Cliven Loubser, JC Greyling, Chad Plato and Johan Tromp return. This is the second-highest number of changes they have made between World Cup matches – the highest being 11 when preparing to face Argentina at World Cup 2015.

Peter John Walters – who became the first player since 2011 to make his test debut for Namibia in a World Cup match when he came off the bench against Italy – will start at inside centre and Eugene Jantjies will extend the Welwitschias’ all-time appearances record to 68.

AJ De Klerk is in the starting XV of a World Cup match for the first time. He has previously featured in three, all coming off the bench.

There is some interest in the choice of Schalk Brits to start at No.8 for the Springboks. There was some talk of this positional shift even before the team left South Africa for their training camp in Japan and, if it was part of Rassie Erasmus’ planning then,  it was always likely that it would happen against one of the smaller sides during the pool rounds.

Brits is a highly mobile player with a decent turn of pace, and his years of experience have given him an exceptional ability to read the flow of a game an anticipate where the breakdown is likely to occur. He is likely to be called on to play to the ball, rather than to play the wider support and traditional “corner flagging” role of the No.8.

The choice of the hooker at No.8 allows both Francois Louw and Kwagga Smith the opportunity to play in the position in which they specialise rather than being used as stop-gap No.8s.

The veteran hooker will probably switch to his more regular position in the middle of the front row once Bongi Mbonambi has had a 50 or 60 minute shift.

Observers will also be looking for indications of the form and fitness of Lood de Jager and Vincent Koch, both of whom are important to the longer term Springbok cause.

At the back there will be interest in the performance of Sbu Nkosi, especially after Makazole Mapimpi struggled on the left wing last weekend. If Nkosi reproduces the form he showed in the Rugby Championships we may see a positional shift coming for Cheslin Kolbe.

Frans Steyn will need to step up a level or two after somewhat pedestrian performances off the bench in 2019. We know his quality, we know his talents, and we know that he has the experience, but does he have the fitness? He has looked a little slow, almost ponderous at times, and seems to be carrying a good 15kg more than we are used to. Perhaps we will see the Frans Steyn of old?

There is not much more that one can say about this fixture.

Namibia will be game opponents, they always are, it is in their blood, and they never give up, but they just do not have the strength in depth of the Springboks, nor the star quality of some of their opponents.

The Springboks should have it fairly easy in the set-pieces, whilst they should have the edge in every department at the back and in the loose, and will be looking for an important bonus point from this game.

South Africa, by around 35 points.