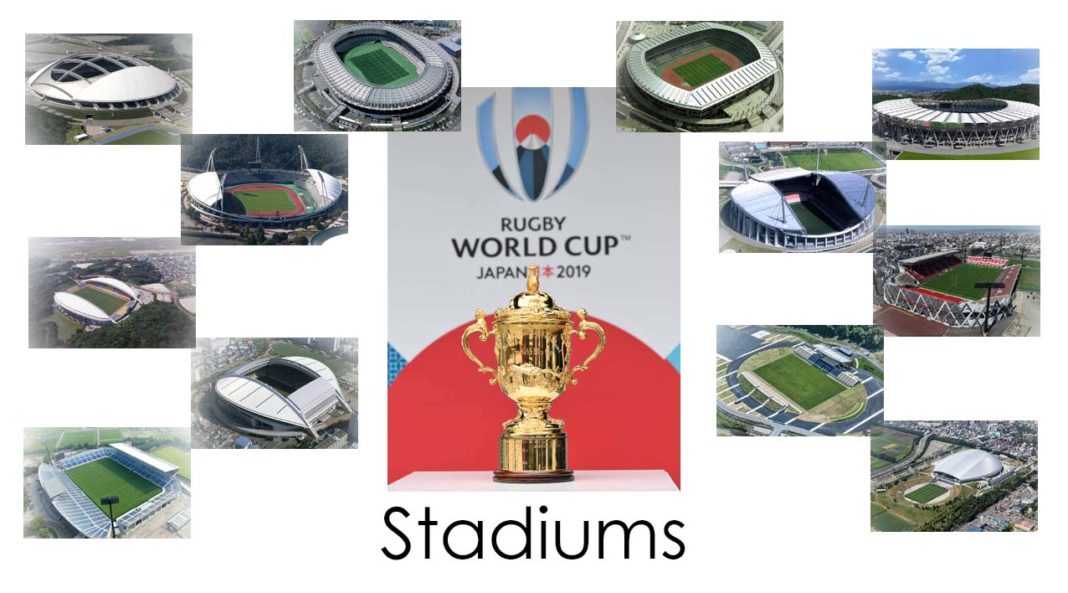 The 2019 Rugby World Cup will be played across 12 venues, some of which are regular rugby stadiums, others are multi-purpose stadiums, while yet others will be hosting rugby matches for the first time.

Three of the stadiums are on the southern island of Kyushu, Japan’s third-largest island. They are: Oita Stadium, Kumamoto Stadium, and Fukuoka Hakatanomori Stadium.

A little further north, on the biggest of the Japanese Islands, Hokkaido, we find two more stadiums clustered close together, Hanazono Rugby Stadium, in Osaka City, and Kobe Misaki Stadium in the city of Kobe. Kobe and Osaka are a mere 29 kilometres apart.

Heading towards the centre of Hokkaido Island, we find two more stadiums that are very close to each other,  Shizuoka Stadium Ecopa in the Shizuoka Prefecture, and the City of Toyota Stadium

Further up Hokkaido Island, clustered around Tokyo we have Tokyo Stadium, Kumagaya Rugby Stadium in the Saitama Prefecture, Kumagaya City, and the International Stadium Yokohama in the Kanagawa Prefecture, Yokohama City.

Heading up to the northern Honshu end of the Hokkaido Island, we find Kamaishi Recovery Memorial Stadium in the Iwate Prefecture, Kamaishi City

And then on Hokkaido Island, the largest of the northern islands, we get the last of the twelve,  Sapporo Dome in Sapporo City

Details of the various venues:

The Sapporo Dome is a stadium located in Toyohira-ku, Sapporo, Japan, and is primarily used for baseball and football.

It is the home ground of the Hokkaido Nippon-Ham Fighters baseball team  and the Hokkaido Consadole Sapporofootball club.

In late 2009, renovations increasing the capacity up to 53,796 were finished. These renovations also included two extra changing rooms (to accommodate preseason matches in the US NFL International Series, which have up to 75 players per team) and further media area as part of new office buildings attached to the stadium.

As part of these renovations, the surface area of the arena itself was decreased to allow for more seating.

The Dome switches between two entirely different surfaces: Baseball games are played on an underlying artificial turf field, while football games are held on a grass pitch that slides into and out of the stadium as needed.

Conversion from baseball to football begins with the storage of the baseball field’s artificial turf. Once finished, a set of lower bowl bleachers rotate from an angled position for baseball to a parallel position. A set of main bowl seats on one end of the dome then retracts, and the football pitch is slid into the stadium. The lower bowl is then rotated 90 degrees. Conversion from football to baseball occurs in reverse.

Kamaishi Recovery Memorial Stadium also known as Kamaishi Unosumai Stadium, is a stadium in Unosumai-cho, Kamaishi, Iwate. Construction on the 16,187-seat venue broke ground in April 2017 and it was completed on 19 August 2018. It is planned to host several games during the 2019 Rugby World Cup.

The city of Kamaishi historically hosted one of Japan’s most successful rugby union clubs, Nippon Steel Kamaishi, which won several national titles during the 1970s and 1980s. The club folded in 2001 and was replaced by the Kamaishi Seawaves.

Kamaishi suffered major damage during the 2011 Tōhoku earthquake and tsunami, leaving over 1,000 residents dead or missing, and damaging a large portion of the city.[3]

In 2014, the municipal government announced that it would bid to host part of the 2019 Rugby World Cup and build a new stadium as part of the Unosumai area’s post-disaster recovery.

The stadium, to be located on the former site of schools that were destroyed in the tsunami, was named as one of twelve venues selected in March 2015 by World Rugby for the tournament.

The ¥3 billion cost of the stadium attracted criticism from residents and observers, noting that the area was in need of rebuilt infrastructure and permanent housing for displaced residents.

Construction on the stadium began in April 2017, with a ground-breaking and prayer ceremony, and was completed in July 2018.

The stadium opened on 19 August 2018 for an exhibition match between the Kamaishi Seawaves and Yamaha Júbilo, attended by 6,000 people.

Unosumai Station on JR East’s Yamada Line will be rebuilt to serve the stadium.

The stadium will be expanded to 16,000 seats for the 2019 Rugby World Cup and host two group matches.

Completed: Will be completed in 2018

Kumagaya Rugby Stadium, is a rugby stadium in Kumagaya, Saitama, Japan. It is currently used mostly for rugby union matches as it is the home ground of the Panasonic Wild Knights. It is also used for University League games and sometimes also for other Top League games.

The stadium is part of a larger sports complex which includes the Kumagaya Athletic Stadium, a smaller athletics stadium and a large arena. The complex is located in the Kumagaya Park.

6,000 temporary seats will be added to increase the stadium capacity for the Rugby World Cup.

Tokyo Stadium, also known as the Ajinomoto Stadium is a multi-purpose stadium in Chōfu, Tokyo, Japan. The stadium was founded at Kantō Mura, the redevelopment area formerly used by United States Forces Japan, in March 2001.

The stadium is often used for non-sport events, such as concerts and flea markets. It has been used as a shelter for survivors of the 2011 Tōhoku earthquake and tsunami.

During the Rugby World Cup, the stadium will be known as Tokyo Stadium and will host the opening ceremony as well as opening match of the tournament.

On each level, the stand is divided into four sections (main, back, north and south sides).

The whole of the upper level, as well as upper tiers of the lower level, is covered by roof, which is made of Teflon (main and back) and polycarbonate (both sides).

Also known as the Nissan Stadium, the International Stadium Yokohama is a sports venue in Yokohama, Kanagawa Prefecture, Japan, that opened in March 1998. It is the home stadium of Yokohama F. Marinos of the J1 League.

International Stadium Yokohama has the highest seating capacity of any stadium in Japan, with a total of 75,000 seats.

The stadium has also been selected as one of the venues for 2019 Rugby World Cup and will host 7 games which includes the final of the tournament.

This decision was taken by World Rugby after Japan announced that the proposed new National Stadium wouldn’t be completed in time.

The stadium has hosted International Rugby matches in the past, including Japan playing Australia in November 2017, a 63 – 30 loss for the home side.

Shizuoka Stadium ECOPA is used primarily for football. The stadium is in Fukuroi City, Shizuoka Prefecture, Japan, although the stadium itself is merely the centrepiece of the larger Ogasayama Sports Park which extends into neighbouring Kakegawa. The stadium’s capacity is 50,889. It is now the primary venue for major sporting events in Shizuoka Prefecture, including track and field, for which it is fully equipped.

Shizuoka Stadium was opened in 2001 and played host to some matches during the 2002 FIFA World Cup, including Belgium versus Russia in the group stage (which Belgium won 3-2) and the quarter-final match between Brazil and England, which Brazil won 2-1.

Ecopa is the venue for J. League team Júbilo Iwata’s more high-profile games, including the Shizuoka Derby versus Shimizu S-Pulse and is also occasionally used as a home ground by Shimizu S-Pulse.

Toyota Stadium is a 45,000 seat retractable roof stadium in Toyota, Aichi Prefecture, Japan. It was built in 2001 and is often used as home to the J1 League club Nagoya Grampus. The stadium is football-specific, which gives matches an authentic football aura, however, it is also used by Toyota Verblitz, a rugby union team in the Top League.

Its roof is unique in that it folds much like an accordion, however, the roof has not been closed since 2015 due to extra costs for maintenance.

It is the stage for the annual National High School Rugby Tournament held every year at the end of December and has hosted important international, Top League games.

Hanazono is the home of the Kintetsu Liners rugby union team.

Tne stadium underwent a large scale renovation during 2017-18 to increase facilities in preparation for the Rugby World Cup.

On 26 October 2018, Hanazono hosted an international fixture between Japan national rugby union team and World XV in celebration of the completion.

The Kobe City Misaki Park Stadium, also known as The Noevir Stadium Kobe, is a football stadium in Misaki Park, Hyogo-ku, Kobe, Japan. The stadium has a capacity of 30,132. This stadium, which features a retractable roof, is the home ground of J1 League club Vissel Kobe and the rugby union Top League team Kobelco Steelers.

In 1970, the stadium was opened at the site of the Kobe Keirin Track. It was the first football stadium in Japan to be able to host games at night following the installation of night lighting.

in order to host the 2002 FIFA World Cup, the stadium was renovated to install a removable roof and increase spectator capacity.

It was opened under the name Kobe Wing Stadium in November 2001 with a capacity of 42,000.

The stadium’s seating capacity is 22,563. It is located in Higashi Hirao Koen (park), 15–20 minutes walk or a short bus ride from Fukuoka Airport.

Also known as the Showa Denko Dome Oita this is a multi-purpose stadium in the city of Ōita in Ōita Prefecture on Kyushu Island in Japan.

It is primarily used for football, and is the home field of J. League club Oita Trinita. It was designed by the famous architect Kisho Kurokawa, and built by KT Group, Takenaka Corporation.

Ōita Stadium has a retractable dome roof with roof system driven by a wire traction system.