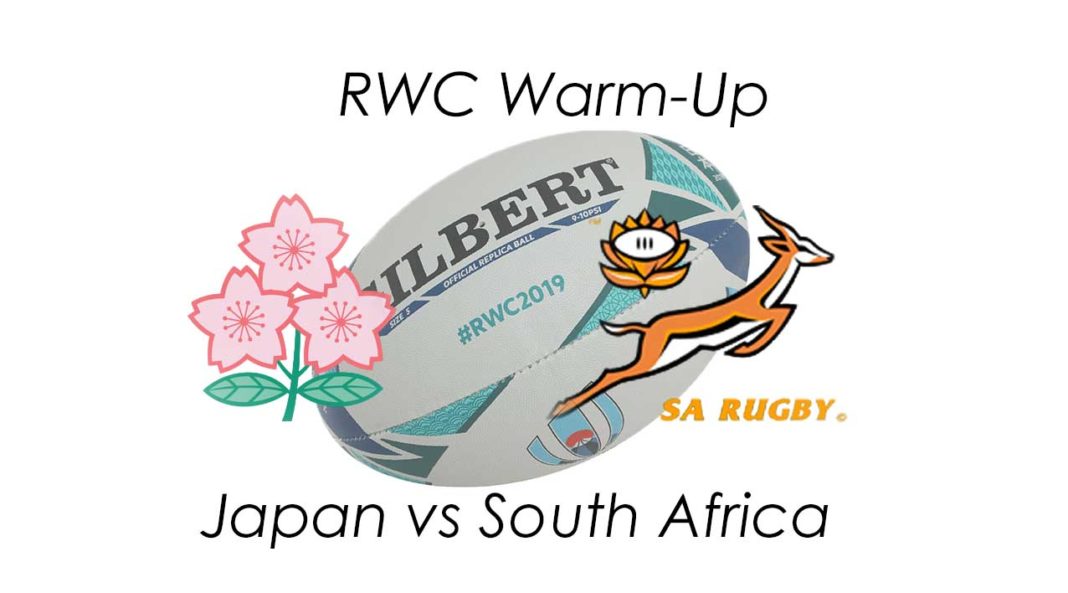 They are the only team in the world  to have a 100% winning record over the Springboks.

The last, and only, time the teams met, Japan stunned the Springboks 34-32 in their opening game of the 2015 World Cup – an upset of such seismic proportions they have made a movie about it.

They are well aware of their winning history, and that the Springboks will take to the field in Kumagaya City with revenge in mind.

Japan coach Jamie Joseph has warned his team that the Springboks would come out firing.

Joseph, who took over from Eddie Jones after the last World Cup, has set his team the goal of reaching the quarterfinals for the first time, and his team has responded to the challenge and demonstrated their focus and commitment by winning the Pacific Nations Cup this year. The rest of their preparations have been going pretty well too – Japan beat Italy at home a year ago and also led England at half-time at Twickenham in November 2018, during a sequence of six victories in nine matches since the start of that year which has seen them climb the rankings to 9thoverall, equal their highest place ever.

They would love to limber-up for their home Rugby World Cup with a victory against one of the tournament favourites, South Africa.

Rassie Erasmus is well aware of the Japanese challenge and warned the Springboks not to be complacent against a very good Japanese team. Complacency cost the Springboks dearly in 2015, and every rugby fan worth his salt will be just a little jittery about this warm-up fixture.

South Africa have seemed to be well on track in their preparations for the 2019 World Cup, and face the daunting challenge of playing the All Blacks in their opening fixture, just 2 weeks hence. They cannot afford to falter against Japan. A loss would rob them of so much of their hard-earned momentum and confidence.

The warm-up at Kumagaya Stadium in the Kanto region of Japan is the only game South Africa are scheduled to play at the stadium – there are no playoffs or finals scheduled for this venue, and all South Africa’s pool games will be played elsewhere. However, weather conditions are likely to be very similar to those that the Springboks will experience in their opening fixture on the 21stSeptember at the International Stadium in Yokohama. The two venues are in close proximity.

There are high temperatures forecast for Kumagaya on Friday, with a maximum 34°C, easing to 24°C. Kick-off is scheduled for 19h15 when the temperature should have eased to around 26°C but with humidity still very high at 82% and dew point expected to be 23°C.

The game is likely to be a hot, sweaty affair, along with a slippery ball due to the high humidity and dew point.

The game provides an opportunity for the South Africans to acclimatise to the heat and humidity they are likely to encounter in all four their pool games. (All their pool games are played in the Kano, Chibu, and Kansai regions, all in close proximity and with similar expected weather conditions.)

Of interest: Kumagaya Rugby Stadium, is a stadium currently used mostly for rugby union matches as it is the home ground of the Panasonic Wild Knights. It is also used for University League games and sometimes also for other Top League games.

South Africa have selected what amounts to their “A” team for this one, unleashing their heavy artillery, while Japan are forced to play without two of their stalwart forwards, Shota Horie and Kazuki Himenobut.

This game could get very interesting as both teams will be looking for an edge to take into the first round of Pool games.

Coach Jamie Joseph named a strong Japan team for their final warm-up before the Rugby World Cup kicks off in two weeks’ time.

Joseph was able to name a starting fifteen led by talismanic captain Michael Leitch, now recovered from a lengthy groin problem, but has had to make do without Shota Hori and Kazuki Himenobut, two of his more experienced veterans.

South African-born Lappies Labuschagne has been named in Japan’s starting lineup to take on the Springboks. The former Cheetahs and Vodacom Bulls loose forward plays for the Kubota Spears after a stint with the Sunwolves, while he also represents the Japanese Test team as he has fulfilled the three-year residency requirement currently in place.

Meanwhile, the controversial Amanaki Mafi will start at the back of the scrum, with captain Michael Leitch playing at openside.Just six players remain from the Japan team who beat the Boks at RWC 2015.

22 of the Springbok 23 that fought to a last-gasp draw against New Zealand in July are included in the squad for Friday’s away clash.

The return to the starting line-up of Springbok captain Siya Kolisi, now fully recovered from injury, is the only change to the team that drew 16-16 with the All Blacks to open the way to a first Rugby Championship in a decade, in Wellington six weeks ago.

It means there are 18 changes in personnel to the last selection – the team which defeated Argentina 24-18 – to complete the Springboks’ domestic programme at Loftus Versfeld two weeks ago.

The only survivors of that match – along with Kolisi – are RG Snyman and Jesse Kriel, who both drop down to the bench, Faf de Klerk who returns to the starting line-up, and Frans Steyn, who covers several positions from the bench, for a fifth successive time.

Kolisi replaces Kwagga Smith – who drops out of the 23 altogether – in what has become an otherwise settled combination, appearing in essence for the third time this season. This was also the group which clinched the Rugby Championship with a resounding 46-13 victory over the Pumas in Salta.

South Africa’s game is built around the power and solidity of a big pack of robust, physical forwards providing front-foot ball to a halfback pairing that are tasked with managing the game and ensuring that the team goes forward at every opportunity. It is a direct, physical style that hammers the ball into the collisions and looks to recycle and strike as quickly as possible. It is a game of pressure, constant, unrelenting pressure.

Japan, in contrast, like to play a game full of movement and darting, linking runners. They prefer to play away from pressure and look for opportunities. They have a vastly improved pack of forwards, bolstered by the inclusion of residence-qualified foreign-born players that provide the muscle. The pack of forwards is perhaps one of the most mobile units in world rugby today. They boast a loose trio of Amanaki Mafi, Pieter Labuschagne, and Michael Leitch, who all earned their stripes playing Super Rugby outside of Japan, along with a second row of Tongan-born Uwe Helu and New Zealand-born Luke Thompson.

Both the locks can, and have played on the flank, which adds to the mobility of the Japanese forward challenge.

The game is thus likely to consist of two teams attempting to impose their own style of rugby on the other. The South Africans, playing at pace and looking for direct, physical rugby and the chance to wear down the opposition, while the Japanese are likely to try and take the ball away from contact as much as possible.

Which brings us to the second major focus of this game. The South African defence has been remarkably solid in 2019, evidenced by their performance in the Rugby Championships fixtures where they conceded just four tries, half of the number conceded by either the All Blacks or Argentina, and 6 less than Australia.

Japan, in the 2019 Pacific Nations competition, scored 14 tries (5 in one match against Tonga), and conceded 6, four of which were after forward attacks by their opposition.

Japan also scored the bulk of their tries in the first half of games, seeming to struggle a bit as the games wore on, perhaps an indication of a lack of depth on the bench.

In 2015 Japan based their defensive effort on cutting down the bigger Springboks with ankle-height grass-cutter tackles. In 2015 these tackles were a new tactic in the modern game and many of those tackles would likely draw the ire of referees today as the requirement, four years on, is that arms must be used in the tackle.

We can expect a repeat performance by the Japanese as they look to cut down the Springbok big men before they cross the gain line. However, we can also expect the Springboks to be far better prepared for this tactic in 2019, and are likely to shift the ball in the contact zone in order to change the angle of attack.

The battle for control at the breakdowns is likely to be fascinating, and crucial to the outcome of this game.

Michael Leitch is a very good fetcher, and is likely to target disrupting the flow of Springbok 2nd-phase ball as much as possible. Neither Lappies Labuschagne nor Amanaki Mafi are great fetchers, both are back-rowers who prefer to play the game away from the ground. However, Uwe Helu has shown that he is a lock/flank that can be very good on the turnover.

The Springboks have Duane Vermeulen, Malcolm Marx, and Steven Kitshoff as masters of the turnover, backed by Siya Kolisi. These four are likely to be the assault troops in the battle for control on the ground. They are backed by a couple of very good ball thieves such as midfielder Damian de Allende, blindside flanker Pieter-Steph du Toit, lock Franco Mostert, and prop Frans Malherbe. Francois Louw is another formidable fetcher, waiting on the bench.

South Africa just seem to have the edge in this department.

The set-pieces may well be the make-or-break for Japan. They face a Springbok starting front row as good as any in world rugby, with Kitshoff, Marx and Malherbe a formidable scrummaging unit with heaps of technical nous backed by huge power. And when these three have had a run, on come yet another starting front row of Mtawarira, Mbonambi, and Nyakane – once again as good as any in world rugby.

The front three are backed by a powerful second row of Etzebeth and Mostert, with RG Snyman waiting on the bench.

The Springbok tight five have not taken a step back for anybody in the world in 2019, and are likely to bring some serious commitment to this warm-up game.

At the back, both teams are blessed with some pacey runners and finishers. Both back divisions can make life difficult for opponents if they get the ball on the front-foot.

The real challenge will be in the half-back combinations. Japan’s Yu Tamura is a steady flyhalf with 52 caps for his country, he has good hands and an educated boot. At 9, Kaito Shigeno is less experienced, at the age of 28 he has just 3 caps for Japan and it may be one of the Springbok focus points to pressurise him and look to break down his link with Shigeno.

In contrast the Springboks have Handré Pollard, who has been in the form of his life, partnered with the busy game management and control of Faf de Klerk, with the opportunism of Herschel Jantjies waiting on the bench.

In essence – we are likely to see the Springboks working to achieve forward dominance in all the set-pieces and at the collisions, with Japanese having a huge task on their hands to hold the big Springboks at bay.

Perhaps the most crucial aspect of this game will be the impact of the bench, where South Africa just seem to have far too many big guns waiting for a chance to have a run.

It is likely to be scrappy, with slightly rusty teams  having to deal with a slippery ball, in hot, humid weather. The team that adjusts to the conditions and focusses on minimising error rates is likely to prevail.

South Africa just seem to have far too many aces in their hand. The Springboks, by 14.