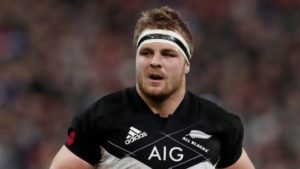 Sam Cane is not one to show any emotion while he is on a rugby field. He is the picture of complete focus and concentration. That is his way. He never flinches or grimaces when he takes a hit, and he never smiles nor celebrates when he makes a hit of his own. The Silent Assassin of the modern All Blacks, he simply goes about the business of making life as difficult as possible for their opponents and ensuring a steady stream of good ball for his team.

When he was lying on the grass of Loftus Versveld on Saturday, being attended to by his team’s medical staff, it was obvious there was something wrong. Cane had stayed down after a collision with Springbok No8 Francois Louw, and it was obvious that he was in pain. His arm and leg movements were not those of a man who had taken a simple head knock, dislocated a finger, or bruised a muscle. It was akin to writhing in pain.

When he left the field, the grimace of pain on his face told us that there was something really wrong. Something more than just a concussion or a muscle strain. He was immediately substituted by Ardie Savea and would not return to the field.

The injury that ended Sam Cane’s involvement in the epic Test encounter in Pretoria has also ended his 2018 season, and might impact on his future as a rugby player too. Only time will tell.

The injury has revealed itself to be a break in his neck, on the lower right side. He underwent surgery on Saturday night to repair the fracture and will remain in South Africa for a week to recover before he heads home to New Zealand.

The All Blacks’ team doctor, Tony Paige, said there was no evidence of nerve damage and that he would stay in South Africa with the player to monitor progress.

Sam  is expected to recover from this injury, but will be unable to participate in any rugby activity for at least three months, probably longer. The fracture itself will take some three months to recover and heal, but will need constant monitoring to ensure that the healed bone is strong enough to handle the high impact of professional rugby.

The All Blacks will handle Cane’s return to the game with extreme caution, much as they managed the return of Kieran Read following his spinal surgery late last year.

We wish Sam Cane a speedy and complete recovery. The All Blacks are a lesser team without his inscrutable presence.