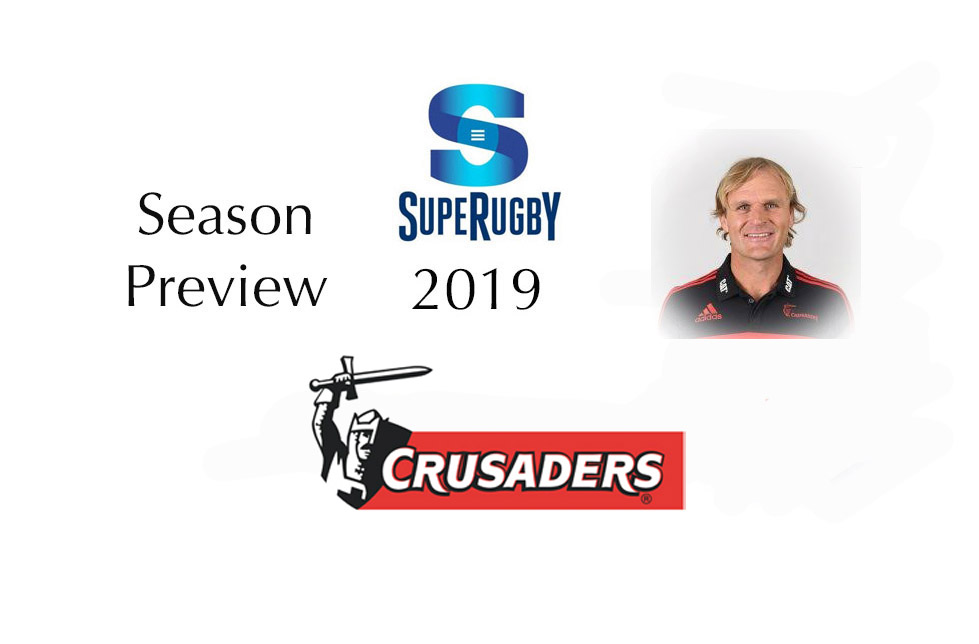 The 2017/2018 Champions will be right back in the thick of things in 2019. Minimal changes in playing personnel, a stable coaching environment, and the confidence that comes from consistency and winning will make the Crusaders the team to beat in 2019.

There is an aura of stability and confidence surrounding the 2019 Crusaders squad. With more current All Blacks than any other team, they will be looking to continue where they left off last year. There is one tiny niggle though:- With so many All Blacks on their books and the NZRU commitment to carefully managing their national squad members’ game time and physical/mental freshness for the World Cup, the Crusaders may have to field second-stringers more often than they would like. However, they do have awesome depth, and their new signings represent some of the best available in New Zealand.

The Crusaders have lost a bit of their powerhouse depth as the likes of Wyatt Crockett, Heiden Bedwell-Curtis, Pete Samu, Seta Tamanivalu and Jone Macilai-Tori have either retired from the game (Crockett), gone back to provincial rugby, or headed off for a different franchise (Bedwell-Curtis, Samu). These are all players who frequently featured in their best match-day squads, and will be missed.Donald Brighouse, Chris King, Sam Anderson-Heather, Sebastian Siataga, Jack Stratton, Mike Delaney and Tima Fainga’anuku all head back to the provinces. Perhaps the biggest loss is the departure of Seta Tamanivalu who has gone to Bordeaux in France. He has a wonderful instinct for running at the weak spot in a defensive array, coupled with incredible finishing ability. He will certainly be missed.The full list of players who have left is:Sam Anderson-Heather (Otago)
Heiden Bedwell-Curtis (Hurricanes)
Donald Brighouse (Otago)
Wyatt Crockett (retired)
Mike Delany (Bay of Plenty)
Tima Fainga’anuku (Tasman)
Chris King (Canterbury)
Jone Macilai-Tori (Northland)
Pete Samu (Brumbies)Sebastian Siataga (Bay of Plenty)
Jack Stratton (Waikato)
Seta Tamanivalu (Bordeaux)

The Crusaders have signed Ngane Punivai, Leicester Faingaa’anuku, Whetu Douglas and Ere Enari. Harrison Allen and Brett Cameron also join the squad on a full-time basis.The will be happy to have signed Douglas, who was a temporary replacement for the injured Kieran Read in 2018, and made six appearances for the ‘Saders at No 8. Whilst he will likely be third in the pecking order behind Jordan Taufua and Kieran Read, the management of All Black game time will create opportunities for him, either starting or off the bench.Harrison Allen is another signing likely to benefit from the management of All Black resources as he backs up the likes of Joe Moody, Owen Franks, and Tim Perry.Brett Cameron signs up as one of those very few that have played for the All Blacks before they signed a Super Rugby contract! His form in the 2018 Mitre 10 for Canterbury was rewarded with an All Black cap against Japan, and now he has a Super contract too. A great back-up for Richie Mo’unga at 10.The list of new signings:Whetu Douglas (Treviso)
Brett Cameron (Canterbury)Harrison Allen (Canterbury)Ere Enari (Canterbury)
Leicester Fainga’anuku (Tasman)
Ngane Punivai (Canterbury)

The Crusaders have been one of the most consistent teams in the world for such a long time, and they have such strength on their playing staff that one wonders if there is any point in discussing their prospects in 2019. Surely they are on their way to another final?However, there is one minor problem! They have so many All Blacks on their books that they might have a problem in fielding a team with a semblance of continuity during the season. The All Black management will be keeping a very close eye on the fitness, focus, and form of their World Cup players, and the All Blacks will have limited game time in the 2019 Super Rugby competition. The surfeit of riches may just be the Crusaders’ Achilles Heel.

The Full Squad, by Position:

It would be lunatic to suggest that the Crusaders will be anything other than serious contenders for yet another Super Rugby title.