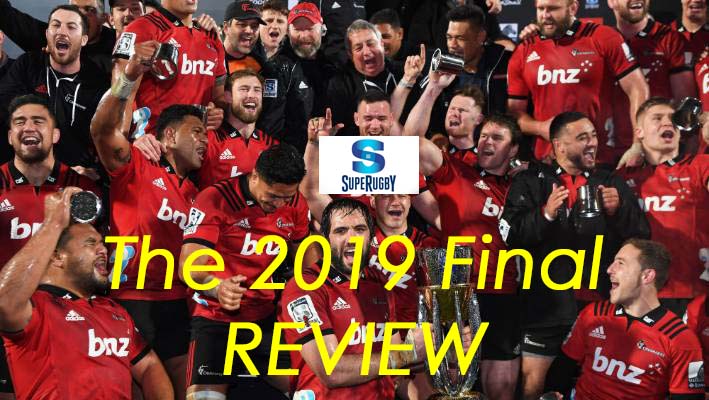 The Jaguares came to Christchurch. They brought their best, and it was so nearly good enough to dethrone the mighty Crusaders. The bounce of the ball, a kick that went a half a meter too far, a man off his feet at the wrong moment, a single wayward pass, it was those little things that stood between the Jaguares and a mighty win.

Those little things, and a focussed, clinical Crusaders who had no intention of surrendering their title without a fight.

And what a fight it was!

The Jaguares threw everything at them, including the kitchen sink, but the Crusaders have been there before, they did not panic, they kept the errors to a minimum, and they did exactly what was required to win a third Super Rugby title.

Quite how both teams got through the game without a couple of serious injuries is a mystery to me – the two teams flung themselves at each other with Test match intensity and ferocity.

The Jaguares showed how far they have come as a team since their introduction into Super Rugby four years ago. The ill-disciplined rabble of their first two years in the southern competition has been replaced by a determined, passionate team that plays with focussed intent and disciplined purpose..

The Jaguares brought a game plan filled with plenty of enterprising passages of play, with a deliberate focus on attacking the 10 channel where they may have seen a weakness in Richie Mo’unga’s defence. It was a good idea as the stats tell us that Mo’unga missed 6 tackles, although he did make 11 in all. Attacking the 10 channel was a well thought out tactic. But was to no avail, as the Crusader loose forwards Todd and Douglas, with scrumhalf Bryn Hall right behind them, shut that channel down with ruthless efficiency.

In fact it was out wide on the right wing where the Jaguares looked more penetrative and they might have benefitted if they had taken the ball wider more often.

At the end of the day, when the dust settled and the time came for sober reflection, it was the Jaguares’ failure to cross for a try when the moment presented itself that cost them the game and the gory.

They missed several opportunities during the game. Late in the first half, Matias Moroni knocked on after desperate cover defence by David Havili and Bryn Hall loosened his grip on the ball just as he was crossing the line.

Later in the first half, a chip kick from Domingo Miotti was just a shade too heavy and bounced over the dead-ball line with Moroni giving desperate chase. Another opportunity went a begging when a Miotti grubber kick was gathered inside the Crusaders’ 22 by Ramiro Moyano, who kicked ahead only for the ball to bounce into touch off David Havili.

And then there was the moment, just two minutes into the second half when Matera and Moroni combined brilliantly deep inside the Crusaders’ half, with the interception by Jack Goodhue of Moroni’s pass to Matias Orlando close to the Crusaders’ try-line preventing a certain try.

Those four scoring opportunities were hard earned, and in a final against the Crusaders, you are not likely to get many more than that. Had the Jaguares converted any one of those opportunities into points, with the scoreboard pressure released and the confidence that comes from a score, this game could easily have gone the other way.

The Crusaders started the game with very serious scoring intent, and the Jaguares’ defence was hugely impressive in that first quarter. Their resolute defence was behind a visible tactical change by the Crusaders, as they accepted that playing unrelenting attacking rugby was perhaps not the right approach in the wet conditions. The home side changed plan and started to keep the passes shorter and used the tactical kicking game to better effect, immediately ramping up the pressure on the Jaguares.

Not that the Crusaders were dominating the game in any way.

Blindside flanker Pablo Matera roamed the field like a colossus, shutting down Crusader raids with ferocious intensity, while using every opportunity to carry the ball back at them.  Wow, he was superb!

In the final analysis, it was Richie Mo’unga’s boot off the tee, in dewy damp conditions, and a great piece of counter-attacking off a ruck turnover that stood between the Jaguares and victory.

They were worthy finalists.

The Crusaders are worthy champions too! They weathered the Jaguares storm, and they used their few chances better. Perhaps the defining moment of the game was when Matt Todd, snaffled the ball at the breakdown, quick hands made meters, through David Havili, and then Kieran Read flicking the ball on to Sam Whitelock down the left wing, Whitelock made the critical yards and then sent a perfect pass inside to the supporting Codie Taylor, who stretched out for a converted try. That was Crusader rugby at its very very best, and that is why they are the champions for the third consecutive year.

I was one of those who were silently hoping that the Jaguares would be able to cause a minor shifting of the stars, just a wobble in the rugby universe. They did their best, but in the end – the stars stayed in alignment and the universe remains as it was before – The Crusaders are still the best non-international rugby team in the world.