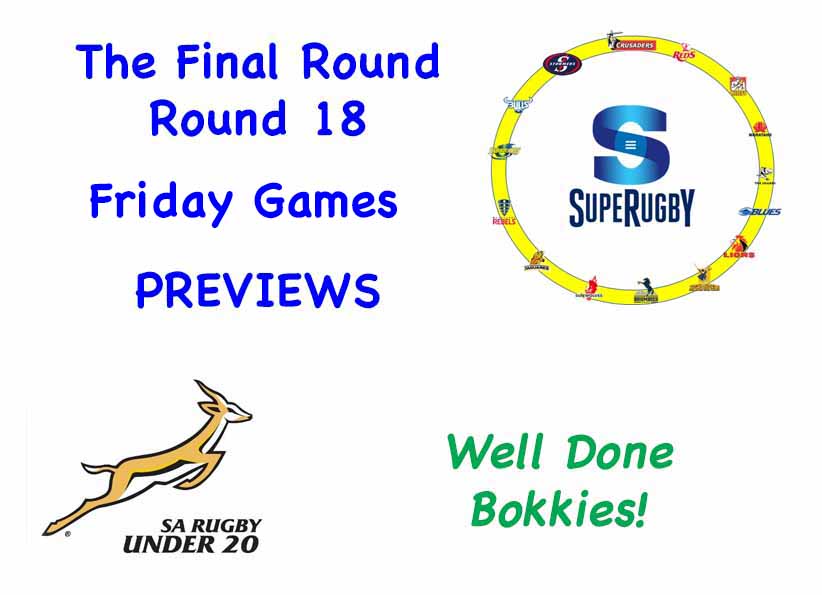 We start with a word about the Baby Boks. The Juniors are through to the semi-finals, and their arch rivals are not!

It was intense, as intense as when the Seniors meet on the rugby field. South Africa and New Zealand are the top end of rugby rivalry, and it showed in this game!

South Africa played with a pace and intensity that impressed, especially in the first half. However, their lack of discipline could have cost them dearly! Three yellow cards meant that they played with 14 men for a full thirty minutes, and that is never a good idea in top level rugby! One of those yellow-card incidents also saw a penalty try awarded to the Baby Blacks – it could have been disastrous!

Some great skills, some great rugby, by both teams. Entertainment all the way.

The last round of the regular season is upon us!

18 rounds of Super Rugby, and Sanzaar have still not found a way to include the concept of neutral referees in their thinking.

Round 18 kicks-off in Invercargill where New Zealander Mike Fraser will be in charge of the Highlanders versus Waratahs clash that is simply the last chance, must-win match for both teams. Wouldn’t a neutral referee have been a good idea?

Later the same day Australian Angus Gardner will referee the massive Rebels versus Chiefs match in Melbourne where there is also more than a mathematical chance that both teams could make the playoffs. Another big game, another home-town referee appointment!

The third Friday match is in Buenos Aires where the Jaguares will host the Sunwolves. Federico Anselmi is the referee. Yet another home-town referee appointment, although this game is of zero consequence in the determination of playoff qualification. The Jaguares are in the quarters, and the Sunwolves are not.

Saturday starts in Wellington where the Hurricanes host the Blues with Glen Jackson the referee. At least Jackson did not play for either side in this game – he is an ex-Chief!

New Zealander Paul Williams has the whistle for the Australian Conference derby between the Brumbies, and the Reds in Canberra. A neutral appointment! You see Sanzaar, you can do it!

The regular season finishes with two South African Conference derbies that will be crucial to the outcome of the Conference and indeed the entire quarter-finals qualification list. All four South African teams can  qualify for the quarter-finals. In Cape Town AJ Jacobs will referee the Stormers versus the Sharks. Jacobs was born in Kimberley, went to school in Welkom in the Free State, so we could say, in the South African context, that he is completely neutral.

Enough has been said and written about what these two teams need to progress to the playoffs. Either side needs a bonus-point win, and then a host of other results to go their way across the weekend.

So this is essentially the last gasp of the season for both teams.

Not much more to say than that.

Liam Coltman will play his 100th game for the club when he takes the field against the Waratahs in Invercargill on Friday.

Coltman, who has only missed one game this year, has been in outstanding form all season and was recently voted player of the year at the club’s awards night.

Co-captain Ben Smith’s troublesome hamstring has not recovered sufficiently enough for him to take his place in the matchday 23 despite training with the team this week. His time as a Highlander has come to an end.

Teihorangi Walden is restored to the midfield and Daniel Lienert-Brown and Elliot Dixon will form part of a six/two forward/back reserve bench.

Daryl Gibson has been forced to rest five of his Wallaby contingent this weekend. This has resulted in significant changes to his starting line-up to take on the Highlanders in Invercargill on Friday.

Departing club captain Nick Phipps will captain the side in his final appearance for the Waratahs in the absence of Hooper.

Ned Hanigan and Jack Dempsey will return from injury, while Lachlan Swinton misses after sustaining a head injury.

In other changes Mack Mason will line up at fly-half, Cameron Clark comes in on the right wing, and Alex Newsome shifts to full-back.

Harry Johnson-Holmes, Will Miller and Hugh Sinclair also join the starting side.

The Waratahs have had a desperate season, so desperate that coach Gibson resisted resting his Wallaby candidates week after week in an attempt to suck a couple of good results and turn the tide in favour of a stuttering, stumbling Waratahs.

It did not work, and now he is forced to rest five of his Wallabies in the final game of the season – a game where only a bonus point win and a whole lot of luck elsewhere across the Sanzaar universe would resurrect the ‘Tahs from the grave.

I am not sure that the depth of Waratah resources provides much hope in this last game of 2019.

The Highlanders are equally desperate for a win. They have, mathematically, a slightly better chance than their visitors of making it to the playoffs, but even this chance requires a couple of rugby miracles elsewhere on the weekend.

Unless the rugby miracle happens, and the Highlanders somehow qualify for the playoffs, this will be the last game for the club for Waisake Naholo, Tevita Li, Luke Whitelock, Liam Squire, and Jackson Hemopo, who are all selected to play against the Waratahs.

Ben Smith did not make the fitness deadline and misses out on what would have been his final appearance for the Highlanders. Matt Faddes is another who misses out on a final game for his club.

All of these players are leaving for foreign climes as soon as the 2019 season is done and dusted.

I am not going to bother with a statistical analysis of the two teams, nor a man-for-man comparison. Both teams will, likely, throw everything they have got at each other, but the game may well fizzle out to nothing more than an exhibition of last-day-of-the-season stuff.

I will record the game, but I am not likely to watch it live. This will be a remote-controlled fast-forwarded game for me, unless something noteworthy needs closer analysis.

The Highlanders, at home in the freezing, rainy Invercargill. They will win, but not by much.

As much as the previous game, the Highlanders hosting the Waratahs, offers the two teams something of an outside chance of qualifying, as long as the rugby gods dish up a couple of miracles along the way, this game is more likely to require some serious commitment and focus from both teams. Both have a real chance of making the playoffs.

Just three points separate the two teams on the log, the Rebels have 34, the Chiefs have 31. A bonus point win for either side would probably be sufficient for a quarterfinal spot! Certainly the Chiefs need that bonus point, the Rebels might sneak it without the bonus point.

There is much to play for, and much to lose.

Will Genia and Quade Cooper have returned to the team’s starting XV for their must-win match against the Chiefs on Friday.

The duo are two of six changes to the Rebels starting side which will look to secure a maiden finals berth with a win over their New Zealand rivals.

The side will also welcome back Anaru Rangi, Jermaine Ainsley, Luke Jones and Marika Koroibete to starting positions.

The Melburnians will be without lock Adam Coleman and winger Jack Maddocks, who succumbed to shoulder and knee/calf injuries respectively.

Chiefs coach Colin Cooper has made three changes to his starting XV, for their encounter with the Rebels in Melbourne on Friday.

The Chiefs are determined to put on a performance worthy of a spot in the quarterfinals next week.

All three changes feature in the forward pack.

Consistent performer Angus Ta’avao will start at tighthead prop, with Nepo Laulala primed to make an impact off the bench in jersey 18.

Nathan Harris returns refreshed from All Blacks leave to start at hooker.

Early in the season it would have been an easy call to tip the Rebels to win this one. The Rebels started the year well, the Chiefs started as poorly as any team in the history of the competition.

The Chiefs will also start with the knowledge that they beat the Crusaders, who then slaughtered the Rebels.

In the mind-games played before a big game, the Chiefs are well ahead at the moment.

Once again, I will not bother with a statistical analysis of the two teams, nor a complete man-for-man match up. When teams meet in season-defining fixtures, those that take on the guise of a knock-out game, then much of the season’s stats become irrelevant as teams up their intensity, their focus, and their tempo in must-win scenarios. Men are prepared to bleed for the cause.

We are thus having to look at form over stats – and in that reading of the game the Chiefs seem to have the clear advantage.

Whilst the full list of players who might be leaving either club at the end of the season has not been published yet, we do know that the Rebels will lose two of their Matchday 23, with Tom English is going to Kurita Water Gush, and Sam Talakai is heading for Suntory Sungoliath. (Adam Coleman and Sam Jefferies are also leaving, although neither will feature this weekend. Coleman is going to London Irish and Sam Jefferies to NEC Green Rockets.)

The game takes on some added importance for the likes of Retallick – if the Chiefs lose, this might well be the last time he plays for the club!

I will be watching this game with interest.

The Chiefs have the form, and the motivation, to win away from home. The Chiefs, by 9.

A bit of a nothing game – one of those pointless fixtures dished up by Super Rugby, where a playoff qualifier plays against a pointless team with no merit to their existence at all.

One team has nothing to lose. The other faces some real danger – not the danger of losing, but  the danger of injury to one or more of their key players in a pointless fixture!

Fortunately Jaguares coach Gonzalo Quesada has seen the danger and has made 12 changes to the team that walloped the Sharks last week. He is saving the big guns for bigger prey.

With the quarterfinals looming, the Jaguares have rested 12 of last week’s team. The only players who are back are Juan Manuel Leguizamón in the forwards, along with Santiago Carreras and Sebastián Cancelliere in the backs. Matías Orlando will be the captain.

Even the final fixture of their year does not see the Sunwolves fielding a team that contains a majority of Japanese players.

Twelve of the starting 15 are non-Japanese-born players, although the bench does contain 6 Japanese players in the 8.

It is all so pointless.

There is really no point is wasting time on an analysis of this game.

The Sunwolves team is nothing more than an artificial construct that attempted to tap into the potentially lucrative Asian market, and failed. Period.

They have been consistent wooden-spooners and will remain so despite having another year of Super Rugby left in their woeful existence.

The Jaguares may as well use this as a training exercise for their extended squad, they should still have too much firepower for the Sunwolves.

The Jaguares, by plenty.