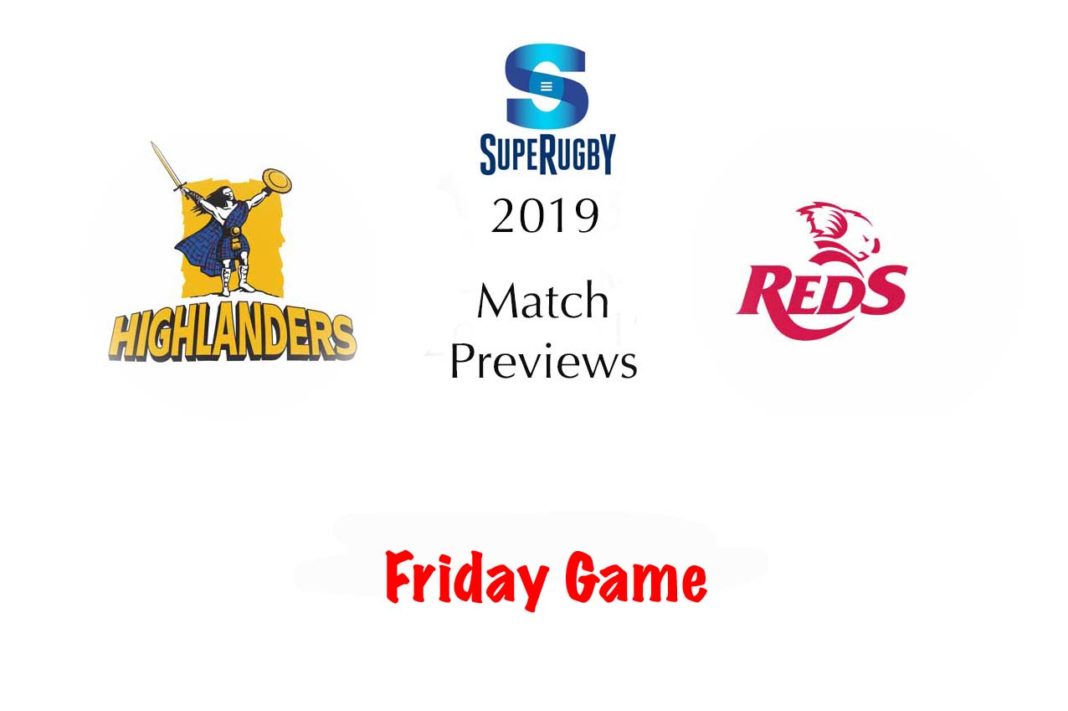 This second weekend of the 2019 Super Rugby Season features seven games, just one of Friday the 22ndand then six on Saturday the 23rd.

Reds coach Brad Thorn is something of a rugby nomad. Having played league rugby for the Brisbane Broncos in the ‘90s, he switched to rugby union in 2001, and then back to league in 2005, and then back to union again in 2008. He has also played for more clubs than you have fingers on your hands. During his various stints in the 13-man game, he played for the Brisbane Broncos from 1994 to 2000, and then again from 2005 to 2007. As a league player he represented Queensland, Queensland Super League, Australia 3 times and Australia Super League 5 times.

As a union player he played for the Canterbury, Tasman, Sanix Blues, Crusaders, Highlanders, Leicester, and Queensland Country. He also earned 59 caps for the All Blacks.

All in all, a well-travelled man.

Now he is coaching the Reds, who will open their Super Rugby season with an away game against the Highlanders in Dunedin.

Well, it is an away game for most of the players, but for Brad Thorn it is something of a homecoming. He was born in Mosgiel, describe as an “urban satellite of Dunedin” so he is truly “at home” this weekend. Then again, based on his nomadic lifestyle, most games away from Brisbane would still be home games for Brad Thorn.

The Reds have no form or track record on which we can base any discussion about the team from Brisbane. Brad Thorn has been “rebuilding” the Reds based on local talent, humility, character and hard work, and it is perhaps time for these efforts and focus to be measured. 2018 was not good, but can be excused as a foundation laying season. We will be watching to see if those foundations are cast in concrete or built on quicksand.

The Highlanders have announced their side with Aaron Smith included in the starting team.

Smith will start at scrum-half while Josh Ioane retains the number 10 jersey with Marty Banks on the bench.

Teihorangi Walden will resume his centre partnership with Rob Thompson while All Black Waisake Naholo replaces Matt Faddes on the wing.

Jackson Hemopo moves to lock for the home fixture in Dunedin as he makes way for Shannon Frizell on the blindside flank. Dillon Hunt replaces James Lentjes at openside flanker and Marino Mikaele Tu’u, who can play all three loose forward positions, is named among the replacements.

Jack Whetton could make his Super Rugby debut off the bench on Friday.

Brad Thorn has named his first Super team for 2019 with three players making their Reds debut this week, prop Feao Fotuaika and new recruits Sefa Naivalu and Bryce Hegarty are named in the Reds’ starting XV.

Queensland pathway players – back-rower Fraser McReight and utility back Isaac Lucas – are set to make their Super Rugby debuts after being included on the bench.

The Reds backline boasts just 262 games of Super Rugby experience, 95 of those caps are shared between two players, 58 for Samu Kerevi and 37 for newcomer Bryce Hegarty. There are, however, five Wallabies selected in the forward pack.

After being handed the 2019 captaincy, Samu Kerevi will lead the Reds and will have the support of Izack Rodda as vice-captain.

Somehow the Highlanders mounted a late fightback to snatch a win over the Chiefs last weekend. This week they are upping the ante by including nine All Blacks in their team against the Reds. Waisake Naholo is back, bringing his undoubted finishing skills to the team, along with the man often rated as the best halfback in the world, Aaron Smith, together with forwards Shannon Frizell and Jackson Hemopo who will both also start.

Aaron Smith proved to be highly-influential when he came off the bench against the Chiefs, and he seemed to be in better form than he was at the end of last year.

The Highlanders take some momentum from their comeback win against the Chiefs into this clash, and have the benefit of a game under their belts to build towards full match fitness.

The Reds are likely to be a bit underdone this early in the season, especially after an enforced break last week, with a bye after their warm-up against a Chiefs selection on the 8thFebruary. Match fitness may be an issue in this their first game of the season.

The Reds could only manage six wins last year, and the Aussie media has suggested that 2019 will be a bit different, suggesting that the Reds will be changing the Aussie rugby landscape.

I am not so sure about that.

Whilst they have a powerful scrummaging unit built around the raw power of the Tongan Thor, Taniela Tupou, and Izack Rodda as their go-to man in the lineouts, the rest of the team is still a bit of a mystery to us, a mix of rookies, journeymen, and known qualities of the likes of Samu Kerevi and Bryce Hegarty who has signed on from the Waratahs.

Can they handle the Highlanders?

We shall have to wait and see.

The Highlanders have home advantage, and a winning game under their belts to take into this one, with the Reds yet to start their season.

Last week home advantage counted for very little as six of the seven games went to visiting teams. I think that this week it will be different.

The Highlanders, by around 15 points.