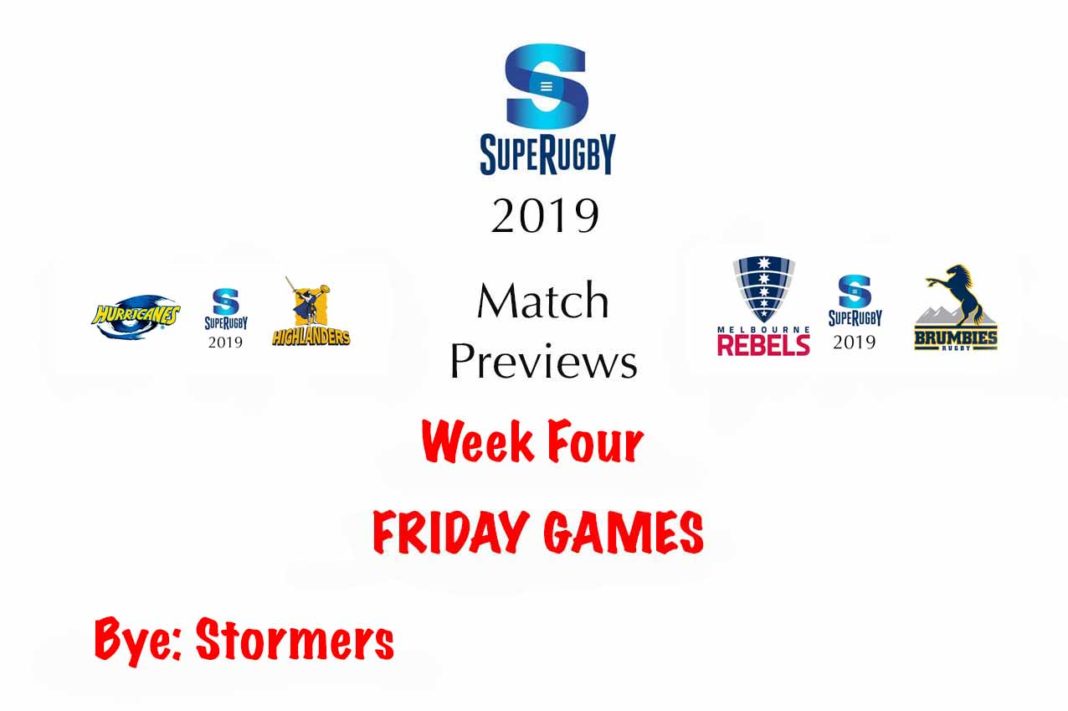 This fourth weekend of the 2019 Super Rugby Season features seven games, two of Friday the 8thMarch and then five on Saturday the 9thMarch.

The Hurricanes may have stumbled and stuttered a bit in their first two weeks of Super Rugby, but they sent out a serious statement of their intent last weekend as they demolished the Brumbies.

The message was clear – the stuttering and stumbling are over, here come the ‘Canes.

Equally, the Highlanders have stuttered and stumbled their way along the road in 2019, winning two close ones before going down to the Rebels last weekend.

They have not been sending any messages to anyone yet.

Simply, the ‘Canes will be favourites for this one, but do not ever underestimate the Highlanders……

The Hurricanes have named a familiar looking team to start against the Highlanders, with just two changes to the starting XV.

Jordie Barrett starts, somewhat surprisingly, on the wing as Vince Aso drops to the bench. In the front row Jeff To’omaga-Allen and Ben May rotate places, with May going onto the bench.

Chase Tiatia holds on to the No 15 jersey after an impressive outing against the Brumbies.

There are some changes on the bench as hooker Asafo Aumua and prop Fraser Armstrong will be in line for their first game time this season. They replace Ricky Riccitelli and Xavier Numia respectively.

The other change sees Wes Goosen drop out of the match day 23 as Vince Aso drops down to the bench out of the starting squad.

The Highlanders have brought back the heavy artillery that were rested last week. Aaron Smith and Ben Smith return to the starting XV for the derby against the Hurricanes.

Luke Whitelock will play at number eight and James Lentjes retains the number seven shirt while the physical Pari Pari Parkinson will again combine with Josh Dickson in the second-row.

Josh Ioane continues at fly-half after a promising start to the competition and alongside him will be a new midfield combination of Thomas Umaga-Jensen and Patelesio Tomkinson. Richard Buckman will earn his first start of the season on the right wing.

The Hurricanes have always been one of the most dangerous attacking teams in rugby, anywhere in the world. They have world-class strike runners and finishers all across the park, Ben Lam, Matt Proctor, the power of Ngani Laumape, Jordie Barrett, the broken play pace and enterprise of Beauden Barrett, and the uncanny ability to score tries that is embodied in scrumhalf TJ Perenara.

Just that simple little fact must be a worry for any Highlanders supporter.

You see, the Highlanders defences have leaked like the proverbial sieve in 2019, missing close to 17% of all tackles attempted.

The Highlanders are struggling to get their attack functioning on all cylinders as they have juggled their resources and brought in new blood this season. More new blood in the midfield this week. It will be interesting to watch Sio Tomkinson front up in the midfield against the ‘Canes. He has a reputation to live up to!

Up front the two teams are fairly evenly balanced, with perhaps just a shade more power on the ‘Canes side, although their locks look a bit green.

At the back, I am afraid, it looks like all-Hurricanes, save for the two Smiths, Ben and Aaron for the Highlanders. Josh Ioane at 10 is looking promising, but he has to take on the best, Beauden Barrett, while the rest of the ‘Canes backs have All Black written all over them.

The Hurricanes, at home, and coming into good form, with Beauden Barrett and Dan Coles both kicking on from last week’s first outings – the Highlanders are up against it.

The Brumbies and Rebels will be playing their third game against each other in six weeks after meeting in a warm-up match in January before Super Rugby kicked off.

The silliness that is SANZAAR’s fixtures committee is again on show this weekend. It is only the fourth week of competition, and the Rebels and the Brumbies already meet for the second time! This is also only the Rebels third SR outing of the season!

First time out, in the first week of competition, the Rebels managed to take it from the Brumbies 34-27.

This win was followed by a bye weekend, during which the Brumbies found their game and walloped the visiting Chiefs by an extraordinary 54 – 17.

The third week of competition saw the Rebels return for their second game of the season, beating the Highlanders 24 – 19 in a somewhat iffy performance.

The Brumbies, of course, were pounded 43 – 13 by the Hurricanes on that same day.

All of which, makes it very difficult to suggest that either team are in any kind of form.

We shall simply have to wait and see.

Dave Wessels has made four changes to his Rebels starting XV for their encounter with the Brumbies on Friday.

Most of the changes are amongst the forwards. Adam Coleman will make his first start at lock for 2019, with Luke Jones to start the game on the bench, while number eight Ross Haylett-Petty has also been named on the bench and may play in his first game of the year.

Prop Matt Gibbon, hooker Robbie Abel and flanker Rob Leota have all been named to make their first starts for the Rebels.

Reece Hodge remains on the bench as Wessels named an unchanged Rebels backline.

Dan McKellar has called on a mix of Super Rugby rookies and veteran leaders in the hope of jolting his side back into form in Melbourne on Friday night.

NRL convert Tom Wright will start at inside centre while Rob Valetini, Sam Carter, Tom Cusack and Henry Speight have all been recalled.

The bulk of the changes are part of McKellar’s rotation philosophy, while Ryan Lonergan will play his first game in almost two years and Murray Douglas is poised to make his Brumbies debut.

McKellar made five starting changes this week, with an addition of firepower on the bench.

Valetini is back into a new-look back row, with Tom Cusack shifting to No. 8 and David Pocock remaining on openside flanker.

Pete Samu moves to the bench to give the Brumbies some second-half punch.

Former Hurricanes and Rebels second-rower Douglas gets his first opportunity for the Brumbies, while Carter returns after being rotated out of the side because of a cork.

The Rebels looked a well-organised outfit at the start of this campaign, but the enforced bye in their second week and a deserved, if somewhat iffy, win over the Highlanders is not suggesting that the balance of power in Aussie Rugby has swung all the way to Melbourne.

The Rebels cause has been helped enormously by the reunion of Will Genia-Quade Cooper as a halfback partnership, their time together at the Reds has helped them as they settle into something of a groove.

Quade Cooper has impressed with his new-found maturity after a year out of big rugby, although there have still been plenty of glimpses of his silliness, they are way less frequent that used to be the norm. His defence is still more than suspect.

This Brumbies side is looking a little startled at the moment. They looked so good in demolishing the Chiefs, but then bumped into a focussed Hurricanes outfit that simply swept the Aussies aside.

The Rebels have some talent waiting on the bench, particularly Reece Hodge, although the Brumbies will believe they’ve got the reserves to match them, with Pete Samu joining James Slipper, Josh Mann-Rea and Chance Peni.

The Rebels may look to exploit the rookie status of Brumbie scrumhalf Lonergan, who will be playing just his second Super Rugby game and his first since making his debut in the last game of the 2017 season. He can exoect plenty of pressure from the likes of Genia.

If this game follows the norm for Aussie derbies, it will deteriorate into an arm-wrestling low-risk game, with the fear of losing paramount in every player’s mind.

The Rebels, at home, with a slightly better weekend behind them, and a winning record, a better balanced outfit on paper, and some players starting to show a bit of form? The Rebels will win by 6.