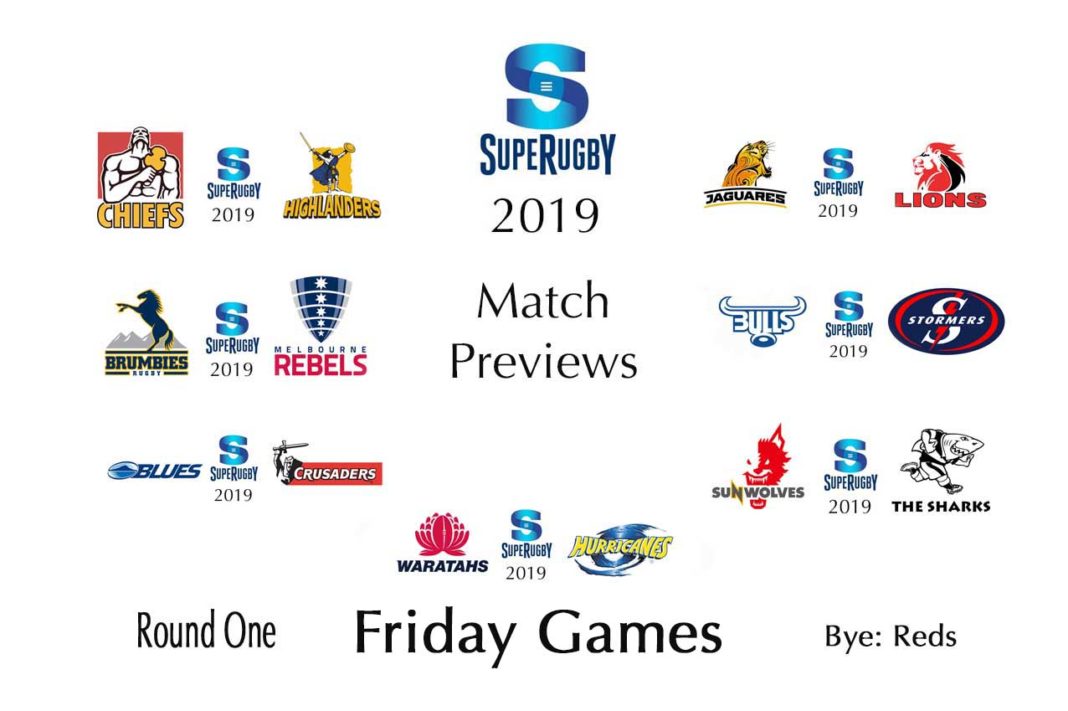 All this will be followed by the mid-year Rugby Championships, the Currie Cup, the Mitre Ten, and then the Holy Grail of the rugby world, the 2019 World Cup in Japan.

That tells of an enormous amount of rugby, far too much for one scribe and one website to handle. Potentially, just looking at Super Rugby suggests 7 Previews, and the 7 post-game reviews,  a mere 14 articles a week, without any other matters of interest, opinions, and snippets that might need airing.

Far too much for any other than the incurable insomniac to read and absorb.

Much like the world of rugby itself, we have to cut back somehow.

Too much of a good thing quickly becomes boring.

In a departure from my practice in previous years I will not be doing individual previews for each match scheduled for a weekend.

Instead I will focus on two combined Weekend Preview & Predictions articles, one for Friday games, and the other for the rest of the weekend’s games – shorter and more concise reading to make life easier for all those who are interested.

(I suffer from a particular and peculiar disease known as Terminal Verbosity, and this new approach is part of my therapist’s recommended treatment to prevent the spreading of Terminal Boredom amongst my regular readers, rugby itself is already in danger of unleashing an epidemic of that same Terminal Boredom.)

If any one single match-up requires more in-depth analysis for whatever arbitrary reason I might choose, a separate preview will be posted that deals with that specific match.

Post-game reviews will also be somewhat condensed in 2019.

I will select one, perhaps two, games that I feel deserve more detailed analysis and review, while all the others will be lumped together in a single article, again to save time and limit the boredom factor.

Enjoy the season, it is going to be a long one, with plenty of interest as the World Cup gets closer and closer.

This first weekend of the 2019 Super Rugby Season features seven games, two of Friday the 15thand five on Saturday the 16th.

Probably the Must Watchgame of the weekend, the Chiefs host the Highlanders in a game that holds much of interest. An injury ravaged Chiefs (What? Again?) have to field a bunch of rookies, while the Highlanders have chosen to start three of their All Blacks off the bench in this season opener.

This game will give us some indication of the early season fitness and form of the New Zealand based franchises.

The Chiefs seem to have some kind of injury jinx that follows their team around all the time. Having spent most of 2017 and 2018 shuffling players and hauling stop-gap players up out of their feeder clubs to supplement their injury ravaged squad, they kick off 2019 with the same problem, yet again!

Orbyn Leger, a 21-year old recruit from the Blues, will make his Chiefs debut as their first four flyhalf choices in the squad are all suffering from pre-season injuries. Damian McKenzie took a knock on his ankle late in the week, brother Marty McKenzie has a hip problem, Tiaan Falcon is out for the season with an Achilles tendon problem, and Jack Debreczeni has an abdominal strain. Midfielder Leger got the nod despite not being familiar with the flyhalf position, with the returning Stephen Donald named on the bench.

Four promising youngsters will make their Chiefs debuts. We have mentioned Orbyn Leger in the No.10 jersey, there are also three other debutants in the side, with former schoolboy prodigy Etene Nanai-Seturo named on the left wing.

He’s joined by former Blues midfielder Tumua Manu, who starts at centre, and Tongan-born Japan international wing Ataata Moeakiola, who will make his first outing for the Chiefs off the bench.

Team legend Stephen Donald also completes his comeback to the side as an injury replacement to help aide their flyhalf injury woes, being named on the bench.

Coach Aaron Mauger named his team to face the Chiefs in Hamilton with loosehead prop, Ayden Johnstone, to make his Super Rugby debut alongside All Blacks Liam Coltman and Tyrel Lomax.

The locking duo of Josh Dickson and Pari Pari Parkinson, while relatively light on experience, will add plenty of size to the forwards at 2.0m and 2.04m respectively.

Regular lock from last season, Jackson Hemopo, will play on the blindside and the pack will be led by No.8 and co-captain, Luke Whitelock.

Kayne Hammington, following good pre-season form, will start at scrumhalf and young Otago pivot, Josh Ioane, taking over the 10 jersey from the departed Liam Sopoaga, will take the responsibility of moving his team round the field and will partner in the midfield with the strong running Thomas Umaga-Jensen earning just his second cap.

The experienced Tevita Li, Matt Faddes and Ben Smith complete the back three.

A strong bench featuring All Blacks Dillon Hunt, Shannon Frizell and Aaron Smith should add some impact later on in the game.

Difficult opening game for both sides.

One has to deal with a host of injuries, necessitating the use of a rookie at 10 and an old man on the bench, while the other is forced to use a rookie in the same flyhalf position as a result of the departure of their All Black flyhalf.

The Chiefs seem to have the upper hand in the packs of forwards, with the likes of Retallick, Allerdyce, Ardon, Boshier, and Nathan Harris adding plenty of muscle. At the back the two teams seem more evenly matched.

There is a lot of talk about 2019 being the Rebels year. Lots of suggestions that they have finally recruited a team that can beat anybody, with Quade Cooper set to revitalise himself, his career, the Wallabies, World Rugby, and the Rebels, all in one package. I am not so sure about that one, only time will tell whether he can sustain his interest and motivation long enough to make a difference.

Dave Wessels is a brave man to bank on Cooper, who is particularly known for being a divisive influence in the changerooms.

The Brumbies also have much to improve on, and will be looking for their 11 internationals to step up their game for a change.

This game might give us some indication of what is happening in the Aussie rugby world.

The Brumbies have named a full-strength side to face the Rebels in their Super Rugby season opener in Canberra on Friday.

Flyhalf Christian Lealiifano will captain the side, which features 11 internationally capped players.He will combine with Wallabies halfback Joe Powell.

Irae Simone is set to make his Brumbies debut following his move from the Waratahs, joining forces with Tevita Kuridrani in the midfield.

Former Chiefs flyer Toni Pulu is another who will make his first appearance in Brumbies colours after moving across the Tasman, with the 30-year-old named in the back three alongside Wallabies Tom Banks and Henry Speight.

In the pack, former Reds skipper James Slipper starts at loosehead prop to form an all-Wallabies tight five consisting of Folau Fainga’a and Allan Alaalatoa up front, and Rory Arnold and Sam Carter in the second row.

77-test flanker David Pocock has fought off a calf strain to take the field in the starting loose forward trio.

Despite expectations that he would start, Pete Samu will have to make his Brumbies debut from off the bench, with Rob Valentini and Lachlan McCaffrey occupying the six and eight jerseys.

The Rebels have named an experienced side to face the Brumbies on Friday.

It will be the first opportunity for ex-Reds Will Genia and Quade Cooper to link up together in Rebel colours, with both players named to start at No.9 and 10 respectively.

Cooper leads a list of five new faces for the Rebels, with former Brumbies players Isi Naisarani and Robbie Abel named to face their old side, with Naisarani to start at No.8, while Abel will start off the bench as the reserve hooker.

Returning Rebel Luke Jones, who played 72 games for the team between 2011-2016, will slot straight back into the starting XV, after being named at lock.

Namibian-born Richard Hardwick will have the tough task of going head to head with David Pocock off the side of the scrum.

Lock Adam Coleman was unable to overcome an injury sustained from the recent 10-day Wallabies Camp, while Reece Hodge has been given further time to come back from his ankle injury.

Australian derbies are most usually dour slug-fests as the fear of losing overrides any idea of playing fast, innovative, open, running rugby. I am expecting this to be yet another arm-wrestle.

Quade Cooper’s return has caused much excitement amongst the Aussie media and scribes, yet I remain sceptical. He is supposed to be unpredictable, yet is so very predictable – everyone knows his goosestep backwards and has learned to read it, and you know that his preferred option is the no-look inside pass, always. He tends to try and do everything by himself, and passing is a secondary option. His tactical nous is questionable and his defence is awfully wobbly under pressure. A year out of top-flight rugby will have had a detrimental effect too. I am not holding my breath.

The Brumbies seem to have the up-front muscle, with the likes of Sam Carter and Rory Arnold scrumming behind Alaalatoa, Fainga’a and Slipper, with Josh Mann-Rea, Scott Sio, and Leslie Leuluaialii-Makin on the bench.

They also appear to have the legs amongst the looseforwards, with Pocock at the helm, backed by McCaffrey, although the Rebel combination of Saisarani, Hardwick, and Cottrell is not bad.