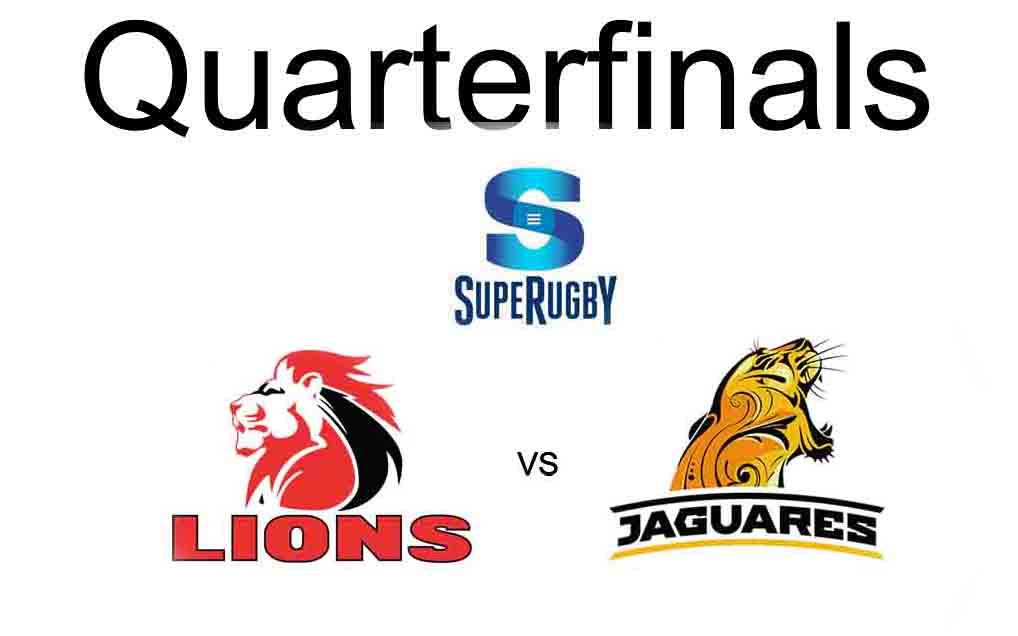 The Jaguares have succeeded to defy all predictions in the last three years.

In their first year of Super Rugby they were fully expected to be contenders for the title. A team overloaded with Test players, all Pumas, rated amongst the world’s top four teams after the 2015 Rugby World Cup. They simply had to be contenders. They failed spectacularly, making absolutely no impression on the established powers in the Super Rugby firmament. They struggled to cope with the endless demands of travelling across continents and time zones, they struggled with the long times away from home, and their on-field disciplines simply went downhill faster than a competitor in the luge at the Winter Olympics.

Their second year was equally disappointing. Once again, the hopeful pundits suggested that the Argentineans would step up a couple of gears and play like the internationals they were. It was not to be. Another year of consistent under-performing, coupled to an abysmal disciplinary record that saw them play long stretches of games numerically depleted, with one or two men sitting in the naughty chair, in one game they were down by three for a stretch. They conceded a table topping 110 penalties and 12 yellow cards as they sank in the mire of Super Rugby’s muddy pond.

When 2018 dawned there were many, myself included, who did not see the Jaguares being able to pull themselves off of the bottom rungs on the log. Their past haunted any possible prediction of future success. Their lack of the necessary disciplines, their raggedy-Anne game plans, their lack of motivation, or ambition, would repeat themselves

They have certainly changed those perceptions. Under new coach Mario Ledesma, the Jaguares have played with hugely improved disciplines, more focus, intent, and balance in 2018. Yes, they still conceded a whopping 131 penalties, but they are no longer the worst culprits in the game, the Rebels and the Bulls are both worse offenders. Just 5 yellow cards in a season where the referees have gone card crazy makes them only the 10th worst offenders in the game. That is a massive improvement in their record.

But there is even better news.

This is a vastly different Jaguares!

There can be no doubt that they fully deserve to be in the quarterfinals.

They come up against the Lions, the top dog in the South African conference and two-time Super Rugby finalists, in 2016 and 2017.

The 2018 Lions are not the same team as they were in 2016 and 2017. The loss of their iconic coach, Johan Ackermann, together with the departure of a number of key plays, and long-term injuries to yet others have resulted in a team that has regressed somewhat. They sorely missed the leadership and captaincy of Warren Whiteley throughout most of the season, they missed the stand-in captaincy and leadership of Jaco Kriel who did not make a single appearance in 2018 due to injury and has now departed for Gloucester. They missed the on-field leadership of Malcolm Marx too.

Without a clear leader and a cool hand on the tiller, the Lions wandered off course rather too frequently. Inconsistency plagued them with inexplicable lapses against teams they should have beaten wearing a blindfold.

The team’s leadership has been restored. Whiteley is back and his calm hand is evident in their most recent games. Marx is back, and leading from the front again.

The Lions have a couple of significant advantages. They are at home, at the altitude where they live and train year in and year out. They also have the experience of playing finals rugby in the last two years, and you cannot buy that experience!

Ross Cronje and Aphiwe Dyantyi will both start for the Lions on Saturday.

They have replaced Courtnall Skosan and the injured Nic Groom in the starting line-up as boss Swys de Bruin makes two changes to the run-on XV.

De Bruin has also altered the bench slightly following Groom’s enforced absence with Dillon Smit among the replacements, while prop Dylan Smith is selected ahead of Jacobie Adriaanse.

Jaguares head coach Mario Ledesma has made several changes to his squad.

Among the forwards, out go six of the eight which started against the Sharks and in come Javier Ortega Desio, Tomas Lezana, Guido Petti, Nahuel Tetaz Chaparro, Agustin Creevy and Santiago Garcia Botta, while Marcos Kremer is shifted to lock.

On the bench, Ledesma has decided to go with a six-two split with Matias Alemanno, Tomas Lavanini and Juan Manuel Leguizamon providing lock and back-row cover.

This is not an easy pick!

The Jaguares have often flattered to deceive, their first two years in Super Rugby is ample evidence. And then, when nobody expected anything from them in 2018, they started the season pretty much as predicted, and then suddenly turned around and produced a remarkable run of victories, starting away from home in Australia, carrying on in New Zealand, and then back home again.

In the two weeks since the recommencement of the Super Rugby regular season they have struggled a bit. They lost to the Bulls 43-34 in a game where they carried the ball more and further than their hosts. Made more passes, more offloads, more line-breaks, more tackles, more tackle bursts, and had more possession. They scored tries too, five of them, but one less than the Bulls.

Somehow they contrived to lose a game that could have given them home advantage in the quarterfinals!

Then they went down to Durban and the Sharks, where they once again dominated all the playing statistics, making more than double the number of carries that the hosts produced, for double the number of meters made too. They made 3,5 times more passes, they had possession and territorial advantage. This time they were let down by their defence, with a mere 83% tackle success rate compared to a massive 96% rate against the Bulls. (The Jaguares defence has been their Achilles heel all season.)

Despite dominating the stats, again, the Jaguares contrived to lose the game 20-10 to a Sharks side that seemed out-of-sorts and somewhat disinterested. When you look back over 2018 and the most recent games, it’s hard to know what to expect from the Jaguares.

Yes, they have spent the last two weeks in South Africa, and do not have to make a long journey to Australia or New Zealand. They should be better rested, but they have now been away from home for almost a month. Add in the psychological barriers of having never played in a quarterfinal nor having ever tasted victory at Ellis Park.

They have to overcome a Lions’ outfit that has not really fired on all cylinders in 2018.

The Lions have played a high-tempo attacking game, scoring plenty of tries along the way, scoring from broken play and set-piece plays with equal regularity. Their maul has been a powerful tool, especially when Malcolm Marx is at the back conducting the orchestra.

When they are going forward, the Lions are one of the better teams in the competition.

However, on the back foot, and on defence, the Lions have been as poor as the worst. Their points difference of just plus 85 is evidence of a team that bleeds tries despite scoring 77 of their own! The Crusaders have also scored 77 tries, but their defence has not leaked like a sieve, hence their positive points difference of a massive plus 247.

Down on the ground the two teams are very evenly matched, with a 96% ruck success rate across the regular season.

This game will revolve around two aspects. The team that gets the most front-foot ball, quickly, and goes forward is likely to create scoring opportunities as both teams struggle to close the doors when the game goes open. Quick possession will be the key.

The second aspect that will help determine the outcome is set-piece domination. When the Lions’ forwards take charge of a game they are not easily beaten, and this is where the Jaguares have battled of late. Last week, admittedly with a second-string pack, their scrum wobbled and creaked, managing to complete just 83% of their set-pieces. The Lions will have taken note!

And then there is the maul. The Jaguares have had some fair success in the mauls, but it is the Lions that have produced a superb display of mauling technique and success in 2018.

So much depends those small games-within-a-game.

The Lions have banked the most lineout wins to date, and have the top lineout forward in Franco Mostert.

The Jaguares are not far off, ranked fourth in the competition for lineout steals, and boast the best poacher in this regard, namely lock Guido Petti.

The two flyhalves will be engaged in an interesting contest. When Elton Jantjies is on his front-foot and the game is opening up, he is untouchable, but his defensive woes are legendary. When Nicholas Sanchez gets space he is a master game manager, but when he gets rattled he turns nasty, with a penchant for off-the-ball moments, which distracts from his focus.

Sanchez has the better tactical boot, Jantjies is better at exploiting the moment. Both can get their back line moving, but can struggle when the pressure ramps up. Both have an accurate goal kicking record.

It is all about confidence on the day. If the Lions score early and Jantjies gets the good-feeling. He is unstoppable. If not…………………………….

The real question has to be whether the Jaguares will go the distance at altitude. Two weeks ago they ran out of puff in Pretoria after trying to play a fast-running game against the Bulls. This week they play the fast-running attack-minded Lions, once again on the highveld? Will they be better acclimatized?

No side has scored more tries than the Lions in the final 20 minutes of matches played this season. If the lungs are burning in those last 20, the Jaguares might be in a lot of trouble.

I would guess that the Lions will be looking for a fast start, and then to try and extend the Jaguares until they run out of lungs.

It might work. Then again, the Jaguares have surprised many in 2018.

All these things tip the scale in favour of the Lions.