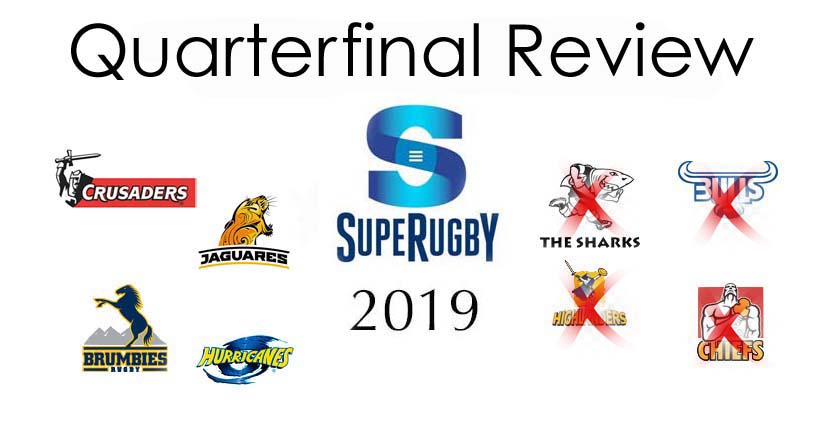 Rather than a match-by-match review coupled to my non-stop whinging about poor refereeing, I will simply comment on the weekend’s quarterfinals in general.

First and foremost – No Surprises.

From my perspective all four games were played in typical knock-out rugby style. Very little flamboyance, very little high-risk stuff, and nothing really contentious to discuss.

Two of the four games provided for close-run contests, much as expected. In one of the two, the Chiefs pushed the Jaguares hard, but the Argentineans had sufficient BMT and nous to ride the storm and squeeze the Chiefs’ attack to death.

The other provided an enthralling arm-wrestle between the Hurricanes and Bulls, with the ‘Canes taking it in the end.

All four the teams involved in these two games could have won, and would have deserved the win.

The other two games were less closely contested.

In Christchurch the Crusaders simply went about doing what the Crusaders do best – playing consistent, clever, well drilled, superbly focussed rugby that was too much for the Highlanders. The men from Dunedin were making a real fist of it, going toe-to-toe with the Crusaders, until the 45thminute when serial offender Liam Squire had another of his moments, and produced a no-arms shoulder charge that saw him sin-binned. From that moment onwards the Crusaders were in charge and never looked back.

Over in Canberra the Sharks’ somewhat listless one-dimensional game plan was not enough to disrupt or disturb the Brumbies. When the Brumbies pack stood up to the Sharks in the set-pieces, the writing was on the wall for the men from Durban. The Sharks might have carried the ball 135 times, but they focussed on taking the ball into ruck after ruck, setting up no less than 107 rucks with the 60% possession they enjoyed. (The Brumbies turned over 4 of those ruck balls.) The Brumbies were content to let the Sharks bash away around the fringes of the set-pieces and in the midfield, focussing on slowing down the recycled ball and preventing any movement out wide. It was all so simple to defend, as they knew what the Sharks would do. The early loss of primary ball-basher Dan du Preez, and then Tyler Paul did not help the Sharks’ cause any.

The Brumbies carried the ball 76 times, but only took it into the ruck 57 times. Rather than seeking contact, they looked to take the ball away from the contact point and go wide of the burly South Africans.

The game between the Jaguares and Chiefs was perhaps the most tense.

When the final whistle sounded, the Chiefs had lost by just five points, having been ahead by eight points with 30 minutes to go.

The Jaguares were the better side on the day, their defensive effort was superlative, and their disciplines held well.  The Chiefs will regret their inability to turn pressure into points. There were times when they set up camp in the Jaguares’ 22 but came away with nothing. One Chiefs’ player deserves mention: Brad Weber should to be in the All Blacks’ World Cup squad.

If I were a Jaguares’ supporter I would have one tiny concern – the Chiefs pack ripped the Argentinean scrum to pieces over the course of the match. The Brumbies will have taken notes!

On the Jaguares’ side, Pablo Matera was immense, he was a constant threat in both attack and defence.

When the Hurricanes look back at their game against the Bulls they will know that they had a couple of fortunate calls from the referee. That aside, it was a gritty win against a Bulls side that just would not stop trying to find their way back into the game.

One thing that the Hurricanes will need to spend some time on as they head over to Christchurch is the defensive frailty of their back three!

In particular, I thought Jordie Barrett struggled to get his game going on all cylinders, with a very poor attempt to tackle Cornal Hendricks as he went in to score.

Salesi Rayasi might have scored two very good tries, but both his deliberate knock-on that gave away a penalty try, and then his poor effort when Hendricks scored his other try were the sort of mistakes that can cost teams in knock-out rugby!

The build-up to the weekend’s rugby provided for some interest away from the quarterfinals too.

Daryl Gibsonhas resigned from his position as head coach of the Waratahs even though he had a year left on his contract.

Not really a surprise, the Waratahs have been the most underachieving team in the competition, considering the strength of the squad at their disposal.

No South Africans in the semis…The semifinals see two Kiwi sides, one Aussie team and the Jaguares from Argentina left to fight it out.

Oddly enough, whilst good news for Rassie Erasmus and his Springbok squad development plans, this is very bad news for Sanzaar as their primary cash-cow is the host of South African fans that follow the game. With no South African team in the semis, it will be very difficult to get South Africans to care about the semifinal games, and that means fewer advertisers, fewer sponsorships, and fewer bums in seats at the various stadiums scheduled to host the coming weekend’s games. No Saffas = no money.

The Cockroach Saga. If Robert du Preez thinks that calling the local media “cockroaches” is the way to win friends and influence people, he is sadly misguided. If his team had actually produced consistently superior quality rugby during the season, perhaps he might have had a chance of getting away with such arrogance and insult. Sadly, the Sharks have not been good, and all Robert Senior has done is alienate the people he most needs on his side. I would be surprised if his contract is extended into 2020.

We look forward to the semis: