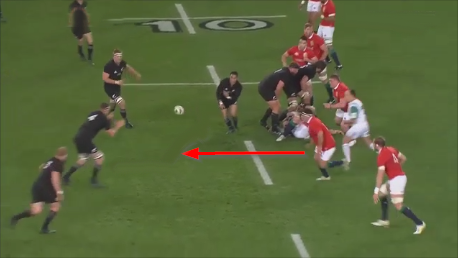 And they changed the way rugby is played across the world.

Warren Gatland, an astute thinking coach if ever there was one, figured that the only way he could beat the All Blacks was to shut down their attacking game from the outset. He conceived of a disciplined, focussed rush defence with massive line-speed to shut down the All Black playmakers and deprive them of space and time. Deprive them of their most important weapon and they will struggle. He was correct!

He also realised that the rush defence is also an offensive weapon of sorts. It can, and does, force turnovers and penalties.

The system worked very well, putting the All Blacks under all kinds of pressure that they had not previously encountered. The system worked so well that the British & Irish Lions drew a series in New Zealand, although some may still suggest that the wayward decisions of a couple of Frenchmen, a combination of referee/linesman contributed to that drawn final test.

The reality, however, is that Warren Gatland and his British & Irish Lions showed the world how to contain and beat the All Blacks.

Across the world of rugby almost every team watched the Lions, and immediately sought to adopt the same defensive system.

Generating line-speed became the main focus for all international teams, with the focus on closing down the space between defender and attacker as quickly as possible. The primary focus was to be able to tackle the man just as he gets the ball, preventing him from kicking or passing. There were slight variations to this “blitz” defence, with players on the outer fringes inserting themselves between the ball carrier and his support runners to prevent passes and offloads. It is all about asserting maximum pressure with a fast-moving wall of defenders, forcing opposition decision-makers to think and act quickly on attack and then execute with pin-point accuracy. Just the slightest inaccuracy resulted in the attack breaking down and creating opportunity for the defenders to counter-attack.

An immediate counter-attack in that pressure situation will always cause severe problems for the attacking team that has to suddenly turn and defend.

After the British and Irish Lions used the rush defence last year. The Australians were quick to borrow and adapt what they learned from the Lions.

The Wallabies hit the All Blacks with a super-fast defensive plan in Brisbane. At the end of the year the Scots and the Welsh followed suit when they hosted the visitors from New Zealand.

The Northern Hemisphereans used the same defensive tactics against the Springboks and the Wallabies during the end-of-year tours.

The All Blacks struggled with their opponents newly developed defensive tactics, but they managed to cope. The South Africans and the Australians did less well.

The Norths was out-thinking the South for the first time in many a decade!

The Wallabies had already learned the lessons of the rush defence.

The All Blacks followed suit, they too started to use the system successfully. 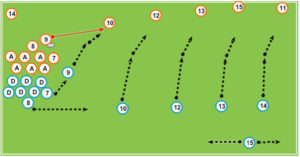 Allister Coetzee’s Springboks were the only international team that did not adopt the rush defence as standard practice, preferring to play some of the older systems, deploying the “drift” or out-tackling system as their first choice, or the “outside-in” or outside shoulder system as a sometime variation, and a variation of both that included the “hook” where the outside centre and the wing shot up out of line to block the longer skip passes while hoping for the intercept. They also tried the “lag” defensive system, where the entire backline hangs back momentarily, giving the opposition the space to make their tactical moves before they actually reach the “tackle line” or point where the defenders close in to make their tackles. This third system was quickly abandoned as supremely unsuccessful.

The South African systems were the traditional systems used for decades by all-comers. They are proven systems, and they do work.

All the systems require very focussed disciplines, with someone running the show. They have worked that way for many years.

If your players make their tackles!

South African players in 2016 and 2017 simply forgot about the basics of either defensive system, and then also declined to make tackles.

Back to the future.

With the “Blitz” or “Rush” defence everyone’s favourite at the moment, the game of rugby finds itself in yet another time phase where static play and constant collisions and ruck after ruck threatens to become the norm. Backs who have no room to move and no chance of building momentum revert to the “crashball” game and take contact, go to ground, and recycle the ball. Teams opt for using pods of forwards as first receivers from rucks and mauls in an attempt to suck in the defenders before releasing the ball to the backs.

It can all be very static, slow, and ponderous. Not great viewing for the fans and TV audiences.

The only way out of this “mess” is for the teams that favour attack to find new ways of breaking apart the onrushing wall of defenders.

The “rush” defence could be the trigger for a whole rethink on attacking ploys with all manner of new variations that seek to negate the line-speed of the defenders.

During the 2018 Super Rugby season we have seen far more chip kicks, grubbers, and kick-passes out to the wings than in the previous decade.

These are tactics that do disrupt the “rush” defence somewhat.

But there needs to be more work, more ideas, more innovation to effectively counter rushing teams.

Support runners, especially the loose-forwards need increased speed across the turf, increased mobility, to reach the contact point as quickly as possible in order to take the ball through the tackle point.

In addition to the increased demands on high-end skills, I am guessing we will see plenty of new variables introduced into the game, with the tactical kicking game coming back into fashion somewhat, longer kicks for position or space coupled to the chips, grubbers, and kick-passes. Accurate box-kicks, are likely to become a focus for some.

It will be essential for all the back-line players to add kicking skills to their running and handling skills.

But there are other ways of beating the rush defence. Using different attacking alignments is but one such tactic. Stand deeper and “buy” time, taking up the old fashioned deep-angled backline set up, with the wing very wide and as much as 25m back from his flyhalf’s position on the field.

Perhaps the backs can line-up very shallow and rely on hand-and-ball speed to move the ball, not running at pace when they receive the ball, but rather looking for the chink in the rush defence line. If you are very shallow and break through the defending wall, you are in the clear and can run with the ball with your support pouring through the defenders to take up position left and right of the carrier. The defenders are forced to turn and chase, while the shallow line-up creates all kinds of problems for cover defenders. Mark Ella’s great Gland Slam Wallabies of 1984 perfected the shallow-attacking line back then. A modern variation of that tactic will certainly work today!

The bottom line to the “Rush Defence” is that the whole system simply offers more challenges to thinking rugby coaches and players, and will require the rapid improvement of many of the basic skills. 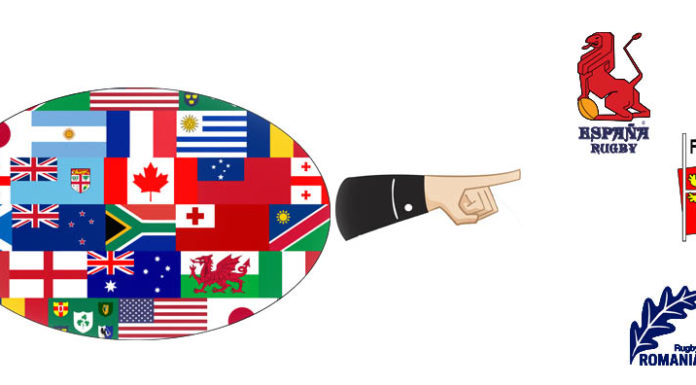 The Springbok Team and the 2015 RWC