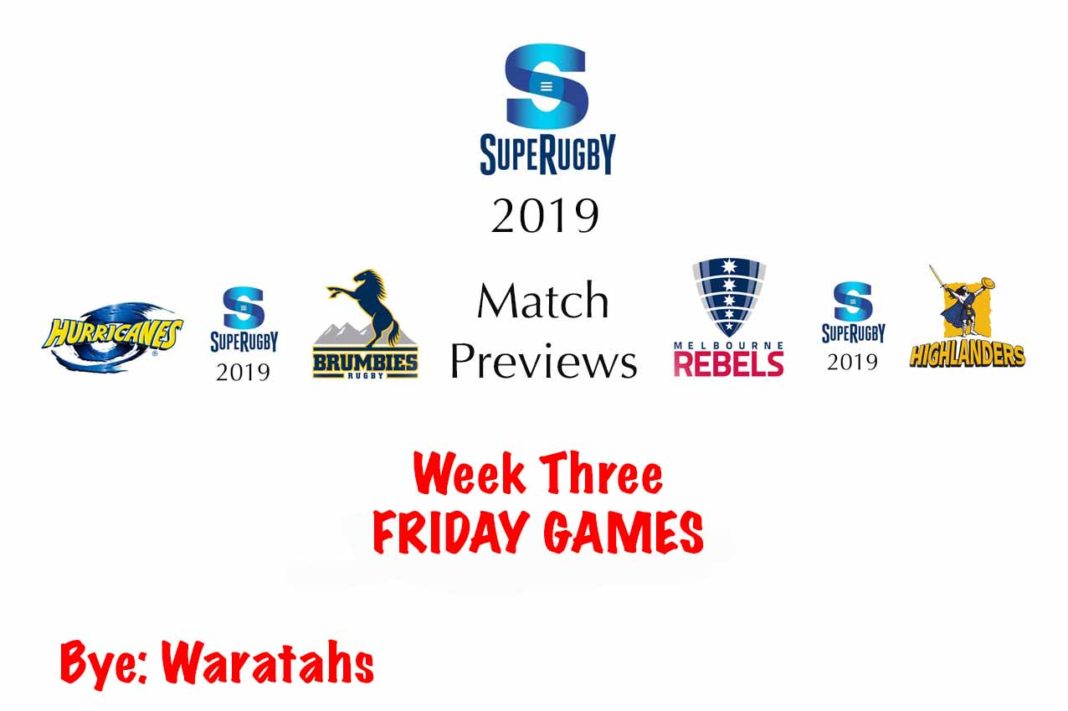 This third weekend of the 2019 Super Rugby Season features seven games, two of Friday the 1stand then five on Saturday the 2ndMarch.

Amongst the happenings is the news that Rassie Erasmus has announced the scrapping of the 30-cap rule for overseas players, and a whole new contracting system for local talent. (Australia announced that they would not be scarapping their 60-cap rule.)Almost immediately the announcement by Erasmus, we had the news that both Akker van der Merwe and Rob du Preez would be leaving the Sharks at the end of the 2019 season to go and play their rugby for a different Sharks outfit playing in England.

Injuries have already hurt a number of the Super teams, and the season has not really built up and steam yet! Two captains, Warren Whiteley and Lood van der Merwe, will watch from the grand stand as their teams clash in Johannesburg.

The first two weekends of Super 2019 gave us some pretty poor rugby, lets hope it is third time lucky and we get some quality worth getting excited about this weekend.

Like so many other Super rugby teams in 2019, both these teams have struggled to really get going this year.

Yes, the Brumbies dismantled a very poor Chiefs outfit last weekend, but the week before they bent the knee to a less than impressive Rebels.

The Hurricanes managed a less than auspicious one-point win over the Waratahs in Round One, a game they could, perhaps should, have lost when Bernard Foley missed a sitter from directly in front.

That win was less than convincing, and then it all went very wrong when the Crusaders chalked up a comfortable 38-22 win last weekend.

It is not a surprise that Beauden Barrett is in the starting XV.

Barrett is needed to bring some leadership, his experience, and his calm game management, all of which was missing in the first two games.

Will this weekend see the Hurricanes finally kick up a gear or two?

Beauden Barrett returns to the ‘Canes starting XV for Friday’s match against the Brumbies.

His return is one of seven changes coach John Plumtree has made to the starting side after last week’s match against the Crusaders.

TJ Perenara returns at half-back after coming off the bench against the Crusaders.

Ngani Laumape will start in the midfield while Chase Tiatia will make his Hurricanes debut at full-back.

Up front, Ardie Savea returns to the loose forward trio at number eight in place of Gareth Evans who has an injury while Vaea Fifita will wear the six jersey.

The other change in the pack is at tighthead prop where Ben May starts, with Jeff To’omaga-Allen set to feature off the bench.

The Brumbies have made four changes to the side that beat the Chiefs last Saturday.

Pete Samu is set to make his run-on debut for the Brumbies at six, alongside David Pocock, who is fit enough to re-join the starting XV.

Scott Sio comes in for James Slipper at loosehead prop having gained some match fitness off bench in the past two weeks.

Sio will form a familiar looking front-row with fellow internationals Folau Fainga’a and Allan Alaalato, who start at hooker and tighthead respectively.

Slipper is named on the bench and will likely play a pivotal role from the reserves.

At lock, Blake Enever swaps with Sam Carter to partner Rory Arnold in the second-row.

Darcy Swain sits on the replacements after impressing in the pre-season.

Joining Samu and Pocock in the loose forwards is Lachlan McCaffrey at number eight.

The Brumbies backline is unchanged for Round Three.

There is much talk about the balance of power having swung across the Tasman, with New Zealand’s long dominance about to be broken by the resurgent Aussie teams.

I would be very careful before I make such a bold statement. One remembers something someone said about summer and swallows…..

Without a doubt, the ‘Canes were fortunate to beat the Waratahs in round one, and they were outplayed by the Crusaders next up. The Hurricanes will be a wounded team, and that makes them a dangerous team when they arrive at the field in Palmerston North. It is a home game for them, and they have a point to prove.

They also have their chief playmakers back in the team, with Beauden Barrett making his first start of the season. TJ Perenara started off the bench last week and made an immediate impact against the Crusaders. He starts again this week in partnership with Barrett. We are told that Barrett has been itching to get out on the rugby field again.

The ‘Canes also have Ardie Savea starting this one!

The Brumbies have a 54-17 win over the Chiefs to draw on, and they would dearly love to put another one over a Kiwi outfit.

The hosts will be looking to stop them in their tracks and send them home to think again. The Hurricanes have the backline to take on anyone. The one focus area in this game will be the Hurricane forwards. The Brumbies demolished the Chiefs pack a week ago, and will be looking to test the ‘Canes up front as quickly as possible.

We can also be sure that the ‘Canes loosies and Perenara will be looking to maximise pressure on Christian Lealiifano and to shut him down. He had far too much room to move against the Chiefs.

A wounded ‘Canes, at home, with Barrett and Savea back in the starting XV, TJ Perenara starting too..

I cannot see the Brumbies pulling this one off.

The Rebels played one game, beating the Brumbies, and then went straight into an early season bye.

A bye is a good thing, when it breaks the season evenly and gives a team a chance to rest and recuperate, but to have to sit out a week immediately after the first game of the season is less welcome.  Just when they are looking to oil the wheels and focus their game, they spend 14 days practicing. It is all a bit of a reset-restart moment.

The Highlanders might have banked two wins from their two starts, but neither win was convincing. A scrambled 30-27 over the Chiefs and then a late game try to win 36-31 over the Reds.

The Highlanders’ defence has looked a little vulnerable so far, with nobody seeming to be in control of the defensive plays.

The Highlanders have another problem, they are without some of their kingpin players this week as Ben Smith, Aaron Smith, Luke Whitelock, Liam Coltman, Dillon Hunt and Tyrel Lomax all sit out the game as part of the All Black game-time management policy, while another All Black, Liam Squire, is on the injured list.

It is going to be interesting to see if the Highlanders’ second stringers will make the step up.

Reece Hodge and Adam Coleman have both been named in Rebels’ match-day 23 for the Rebels’ first home game of the year.

Both Hodge and Coleman will start on the bench after overcoming injuries in what will be their first games of the 2019 Super Rugby season.

Two changes have been made to the starting XV, with Sam Talakai to replace Jermaine Ainsley at tighthead prop, while Brad Wilkin has come into the flanker role, meaning Namibia-born Richard Hardwick will start in the reserves.

The Highlanders will take on the Rebels without a number of key All Blacks in Melbourne on Friday.

The All Blacks’ Super Rugby resting policy means Ben Smith, Aaron Smith, Luke Whitelock, Liam Coltman, Dillon Hunt and Tyrel Lomax will all sit out for the Highlanders, while 23-test loose forward Liam Squire is still yet to return from an ongoing hip injury.

Halfback Folau Fakatava, hooker Ricky Jackson and prop Josh Iosefa-Scott are all set to make their Super Rugby debuts from the bench.

Bryn Gatland gets his first start at flyhalf while Josh Ioane moves from 10 to fullback. Josh McKay starts on the left wing and Thomas Umaga-Jensen returns in the midfield after a week off.

In the forwards, Elliot Dixon will start at No.8, replacing Luke Whitelock, while Pari Pari Parkinson will start in the middle row with the experienced Jackson Hemopo. Ash Dixon will captain the team.

The Rebels began their campaign with a bang when they beat the Brumbies 34-27 in Canberra. Then they had their first bye, which is likely to rob them of any momentum they would have taken from that win.

The Highlanders have creaked and groaned as they struggle to get their engine working properly after the off-season, but they have two wins under the belt despite not firing on all cylinders or looking terribly good.

The Highlanders have impressed on attack, averaging more metres and clean breaks than any other team, but they have been weak on defence, with a tackle success rate of just 81%.

However, a motivated Highlanders outfit is always difficult to beat, and I am guessing that they will be highly motivated for this one, especially the second stringers with an extra point or two to prove!

I have the Highlanders taking this one, by 9 points.