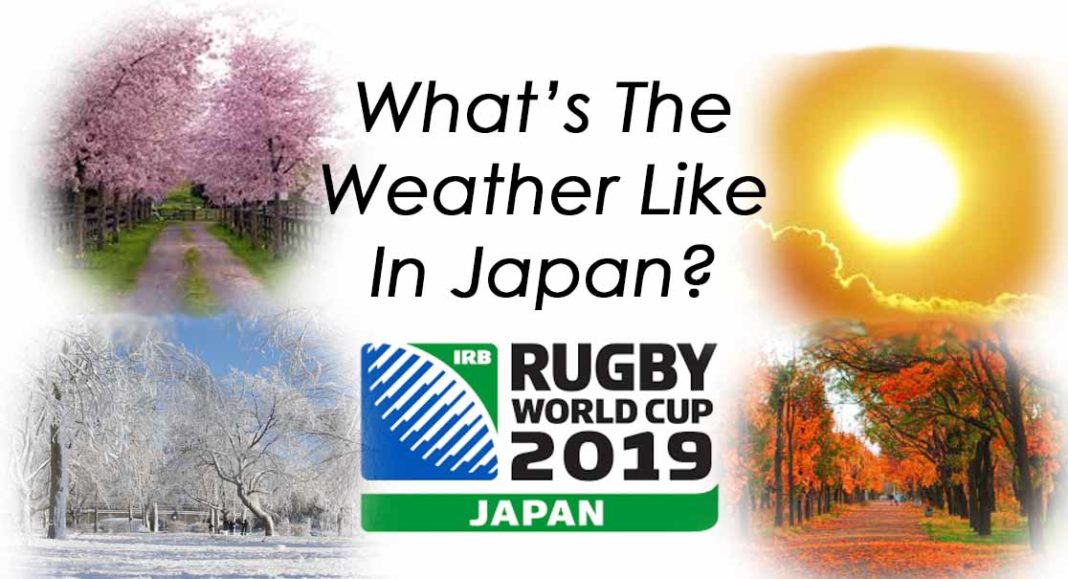 Weather patterns and temperatures vary across the country but, according to various travel advisory websites, the best time to visit Japan is spring (March & April) or autumn (October & November), when days are sunny and dry.

During the summer months (May to September), the cities are hot and humid, with heavy rainfall occurring across the country, especially in June & July, except for Hokkaido.

Visitors to the Rugby World Cup will perhaps witness one of Japan’s two naturally beautiful seasons, autumn with the “koyo” – the autumn leaf viewing.

Let’s look at the expected weather conditions at each of the regions that will host Rugby World Cup fixtures.

The only RWC venue in this region is the Sapporo Dome. Sapporo is the largest city in the northernmost main island of Hokkaido, with a population of 1.9 million.

Hokkaido is cooler than the rest of the country with temperatures reaching as low as -8° during the winter months and peaking at 25°C during summer.

Weather conditions in the winter are affected by the island’s proximity to Siberia, with cold winds that bring significant snowfall – essentially perfect conditions for winter sports.

As the rest of Japan experiences humidity and rain during the summer months, Hokkaido enjoys pleasantly warm and sunny days, and so the hiking season continues.

The island also avoids the typhoons that pound the southern islands during Autumn months when days are typically crisp and dry, and by mid-September Hokkaido is the first place in the country to experience the famous autumn colours.

September weather:Whilst temperatures in Sapporo drop in September, daily average temperatures are still fairly high in the first half of the month (avg temp: 20°C), although evenings are noticeably cooler. There is a higher chance of rain in September, although Hokkaido escapes the typhoon generated rainfall that the rest of the country is experiencing this month.

October weather:Autumn is in full swing and Hokkaido’s National Parks are awash with the reds and golds of the season. Days are typically sunny, crisp and dry, with comfortable temperatures (avg temp: 16°C) making this an ideal month for rugby matches.

This region hosts just two RWC games, both in September.

The main island of Japan, Honshu is split into a number of regions, Tohoku in the north, Kanto in the east, Chubu in the central region, Kansai is the southern central region, and Chugoku is both the most southern, and most western part of Honshu island.

Weather conditions and temperatures vary across all the regions.

The Kamaishi Recovery Memorial Stadium is situated in this region which includes theJapanese Alps. The region experiences slightly cooler temperatures than the rest of the island.

This regions hosts two RWC games, one in September and the second in October:

The Kugayama Stadium, Tokyo Stadium, and the International Stadium in Yokahama are all situated in the Kanto region, which can be very hot and humid in the summer months, temperatures pushing the mercury up to 35°C on some days.

The City of Toyota Stadium, and the Shizuoka Stadium are in the Chibu Region.

The Hanazono Stadium and the Kobe Misaki Stadium are both in the Kansai Region.

September Weather:Regional weather conditions may vary, the further south you go, the more exposed you are  to typhoon weather conditions, especially in the Kanto, Kansai and Chibu regions. September is the wettest month in and around Tokyo. Hiroshima and Osaka are drier and sunnier.

Temperatures in Tokyo, Kyoto and across most of Honshu remain high in September (avg temp: 23-25°C).

October weather:Autumn arrives in Honshu and the warm, rainy days of summer turn cooler and drier as the month progresses (avg temp: 22°C). Tokyo sees more rain this month than the city of Osaka, and Hiroshima is drier again with more sunshine.

The stadiums in these regions host the bulk of the RWC games.

Located just off the southern tip of Honshu, the island of Kyushu hosts three RWC stadiums, Fukuoka Hakatanomori Stadium,  Kumamoto Stadium, and Oita Stadium. These stadiums are in an area that enjoy similar temperatures to the southern Honshu regions of Kyoto and Hiroshima, and there is a chance of typhoons as the summer turns into autumn (August – September).
Once the typhoon season has passed, autumnal days return to dry skies and comfortable temperatures.

September weather: Summer temperatures continue over the whole of Kyushu in September (avg temp: 24°C), but there is still a realistic threat of typhoons during the month.

October Weather:Autumnal days can be expected across the islands of Shikoku and Kyushu in October (avg temp: 22°C). Typhoons are still a distinct possibility at the beginning of the month.