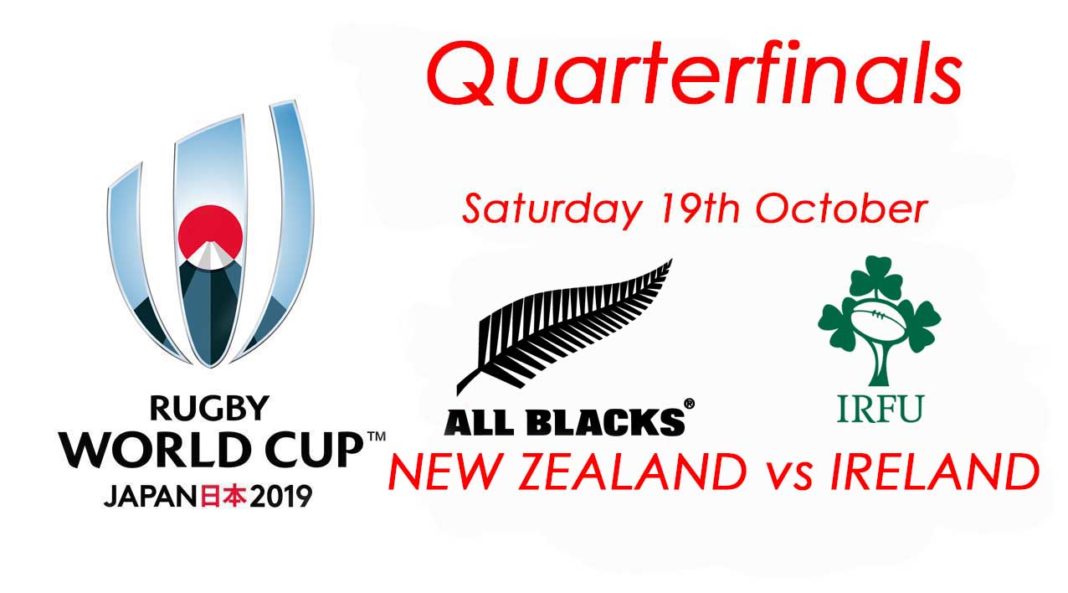 I have been looking forward to this game since the 17thNovember last year, the day when Ireland beat New Zealand 16-9 at Lansdowne Road.

It was their second win over the All Blacks since they started playing Test rugby against each other.

The first win was, oddly, in Chicago USA, two years earlier on the 2ndNovember 2016. On that historic occasion Ireland managed a remarkable 40-29 win over the New Zealanders. (Later that same month, on the 19thNew Zealand hit back with a 21-9 win on the 19thNovember at Lansdowne Road, a game that many suggested was one of the meanest, hardest displays of All Black revenge rugby bordering on criminal assault.)

After their 2018 win, Ireland moved up the World Rugby ranking to the 2ndspot and there was much talk of possibly dethroning the mighty All Blacks.

Every All Black worth his salt would have listened to that talk, and will be itching to set the record straight.

They will be primed for revenge, and that often portends a display of some seriously exciting All Black rugby.

A horrid 2019 Six-Nations put paid to Ireland’s aspirations to reign as the World Number One in the run-up to the Rugby World Cup.

Yet, there has still been plenty of talk about knocking the All Blacks off their lofty perch and finally unmasking them as mere mortals.

Ireland have never got past the quarterfinal of a World Cup, and this is the single-minded goal for 2019. Their entire purpose in life it to get through to the semifinals of the Rugby World Cup.

They do have a mountain to climb.

A big, black mountain. With a sliver fern growing on its slopes.

It is a mammoth task that face the men in the Irish green.

Ireland’s 2019 has not been the best year in their history. Their 6-Nations aspirations were flattened by a 32-20 loss to England, the score flatters a poor performance by the Irish. They followed that loss with patchy wins over Scotland, Italy, and France, but were hammered by Wales in the final fixture of the competition, going down 25-7.

Their World Cup has been a bit iffy, with a shock loss to Japan that made the same kind of wave as the Japanese win over the Springboks in 2015.

A year ago Ireland looked impossible to beat – there defence was remarkable, and they played a hard, direct style of rugby that afforded them opportunities to score. Somehow, they have gone off the boil a bit in 2019, and no longer look anywhere near as impressive as they did a year ago. Perhaps they peaked for the Rugby World Cup a year early?

The loss of Bundee Aki in their midfield is a massive blow, and the Irish know that! (They even flew in some really expensive legal firepower to represent him at his disciplinary hearing, but to no avail.)

Aki has been the man that holds the entire Irish attack together, and has been their go-to man in the carry. His defence has also been key to their success. Without him their backline attack just seems a little light.

Be that as it may, Ireland and the Irish players have been talking brave words and suggest that they cannot wait to tackle the New Zealanders.

The All Black team, in stark contrast to their increasingly jingoistic media, have kept a low profile, going about their preparations with little or no fanfare. There have been no loud predictions, no media events, no fuss, no bother…

Which is always a very dangerous sign when you think about All Black rugby history. They internalise things, and they focus on the job at hand, nothing else. They look, and sound, tuned in and ready for this game.

They will have spent time analysing Ireland’s game too.

They know all about Irelands’ defence.

You see, they know that Andy Farrell is Ireland’s defence coach. He is a known quantity.

He is a clever fellow, a man who almost singlehandedly has changed the way the modern game is played by focussing his strategies on shutting down attacking formations as quickly as possible.

This defensive system has been at the heart of Irelands’ successes in 2018, and the signs of the same have been visible in all their games in 2019, despite some creaking and groaning across the field.

The All Blacks know, and expect the Irish to produce a mammoth defensive effort.

They have been working on counters to the rush defence for the last two years, with a variety of tactics designed to turn the defence at every opportunity.

They use the kick-pass with great accuracy, allowing wings and the fullback to run out wide and onto the ball. They also use tactical chips and kicks to turn the rushing defenders around.

They have developed their dual-playmaker strategy too, using their very best flyhalf, Beauden Barrett as their second playmaker from the fullback position, while Richie Mo’unga is the initial playmaker who takes the ball directly at the rushing defenders, which allows Barrett to slot into the first receiver slot and dictate the game from the second phase.

New Zealand have also changed the way that they hit the ball up in the channels after the lineouts, taking the ball deeper in-field to create the opportunity for the dual playmakers to take the ball left or right.

I have no doubt that New Zealand will be looking for ways to exploit the space created behind the rushing Irish defenders.

This promises to be a game between two contrasting styles of rugby – the attacking mindset of New Zealand against the defensive mindset of the Irish.

There is an added ingredient to these contrasting styles of play.

The referee for this game is Nigel Owens, arguably the best in the world today. Owens favours a free-flowing game with less interference by the referee – he will allow play to develop without pedantic whistle blasts at the slightest hint of a transgression of the Laws. He has a fine feel for the game of rugby, interprets situations and allows the game to continue if some technical breach of the Laws does not have a direct influence on the outcome of the movement of the tactic.

Stats show us that the there are fewer penalties and stoppages when Nigel Owens has the whistle, and that the ball is thus in play for longer.

And that favours the free-flowing style of the All Blacks, rather than the more rigid structure-based game of the Irish.

This is not a criticism of Nigel Owens, rather it is praise – he lets the game flow, unlike some of his more pedantic colleagues.

Whatever we think of the two teams’ different approaches to the game of rugby, there is one issue that we cannot ignore, and that is form.

New Zealand have been in good form so far in the Rugby World Cup. Yes, they had a close run thing with South Africa where a single poor pass and a missed penalty was all that stood between the teams and another draw, but the rest of their on-field displays have been focussed, and pretty much as expected.

Ireland has not been in top form at the 2019 RWC, but they do have the class to be able to step up a couple of gears.

It could get interesting.

Brodie Retallick has been named in the starting line-up to face Ireland on Saturday.

Retallick has only played around 30 minutes at the tournament – in the Round Three encounter against Namibia – since dislocating his shoulder in a Rugby Championship Test against South Africa in late July.

He will pack down in the second-row alongside Sam Whitelock while Scott Barrett starts on the replacements bench.

Steve Hansen has also opted to retain the midfield combination of Anton Lienert-Brown and Jack Goodhue while Sonny Bill Williams will provide cover from the bench.

Beauden Barrett returns at full-back and starts alongside wings George Bridge and Sevu Reece in the back three while Richie Mo’unga and Aaron Smith are the half-backs.

Kieran Read leads the team from number eight with Sam Cane and Ardie Savea starting on the flanks.

In the front-row, Codie Taylor is preferred to Dane Coles at hooker, with the latter to start off the bench, while Nepo Laulala and Joe Moody are the two props.

Johnny Sexton and Conor Murray will become Ireland’s most capped half-back pairing on Saturday when they face New Zealand in their Rugby World Cup quarter-final.

Overtaking Ronan O’Gara and Peter Stringer, they are paired together for their 56th international game in the clash at Tokyo Stadium.

They will play inside a midfield of Robbie Henshaw and Garry Ringrose. Rob Kearney returns to the line-up at full-back with Jacob Stockdale and Keith Earls starting the wings.

Rory Best will lead the team in his 124th appearance in green. Cian Healy wins his 95th cap, and will pack down at prop with Tadhg Furlong on either side of the captain.

Iain Henderson and James Ryan are paired in the second-row with Peter O’Mahony, Josh van der Flier and CJ Stander in the back-row.

A year ago I might have been inclined to tip Ireland to win this one and then go on to play in the final, with a good chance of winning the World Cup. They were undoubtedly the form team in the world of rugby.

That was then, this is now.

Ireland have not been in good form at all in 2019, and have not shown any real improvement at the Rugby World Cup.

And form is everything.

We may say that class is permanent and form is temporary, and there is no doubt that Ireland have loads of classy players, but it is that form thingy that worries me.

It should worry the Irish fans too.

Another aspect that gives cause for some Irish worries, is the depth on the All Black bench. They are one of those teams that if their starting XV do not get the upper hand, then their 23 are likely to do the job.

Think on this: The All Blacks could afford to leave Ben Smith and Ryan Crotty out of their match-day 23! There is no room for Reiko Ioane either! They can start with Brodie Retallick and have Scott Barrett waiting on the bench! Dane Coles and Sonny Bill Williams did not get a starting call, Matt Todd is also on the bench. So is Jordie Barrett.

And that is where the biggest difference between Ireland and New Zealand can be found, right there on the bench.

I have been puzzled, just a little, by the increasingly jingoistic New Zealand media. New Zealanders are a proud nation, with a rugby team that stands head and shoulders above all others in the world. They have much to be proud about, yet their most endearing quality has always been their humility. Of late their commentators, their media pundits, and even their key-board warriors on the rugby websites and chat pages of the world have been increasingly arrogant and dismissive of their opponents.

Just in the last two days we have heard Justin Marshall suggest that his countrymen would put a huge score past the Irish, while Radio New Zealand‘s Hamish Bidwell wrote off Ireland as “a spoiling team”, adding “playing much actual rugby eludes them.”

“Conditions [will] suit athletes and players with skill and vision. New Zealand has an abundance and Ireland few, if any,” he said.

That is not the New Zealand way, it does not win friends, and may just influence some to support the Irish. More, it might just indicate a measure of unease about their chances going up against the Irish!

We shall wait and see.

I have to go with form, and that suggests a New Zealand win, by around 15 points.