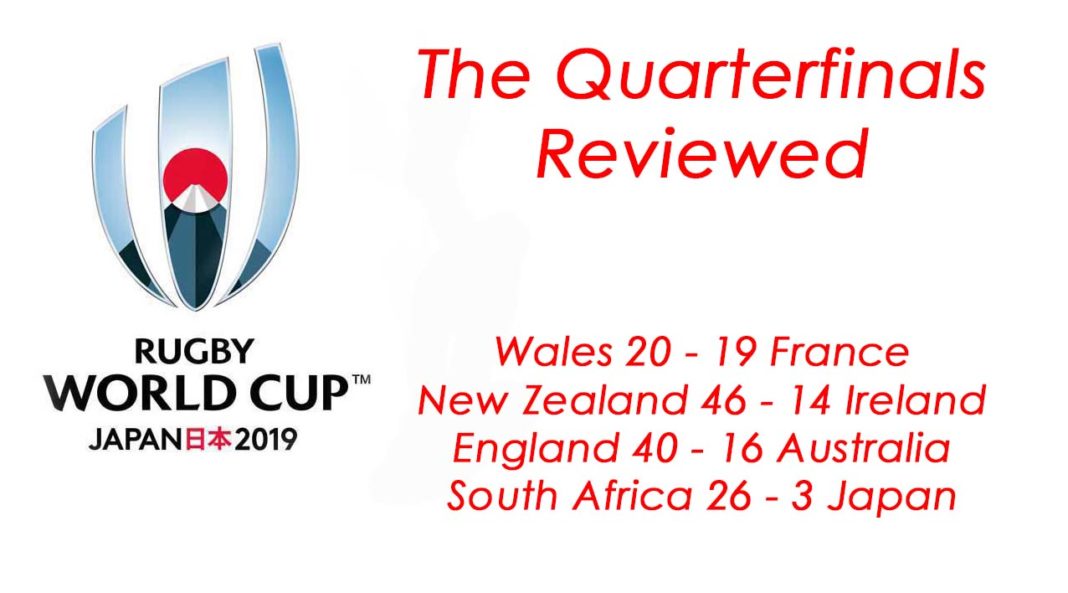 The weekend started with 8 teams in contention for the 2019 Rugby World Cup. When the whistle sounded to end the match between Japan and South Africa, there were just four teams left.

The four semi-finalists are England, New Zealand, Wales and South Africa, and rightly so. It would require more than a stretch of the imagination to suggest that these are not the four strongest sides in the world today.

These four teams have certainly been the strongest teams over the past year in their respective regional tournaments and at the 2019 Rugby World Cup.

Each deserves to be in the mix as we head into the semi-final weekend.

Let’s take a quick look at the four quarterfinals played this past weekend.

The game ended in a 20-19 victory to Wales, after a massive effort by the 14-man France as they defended their lead after a great start to the game. Sadly, a 49thminute moment of madness by French lock Sebastien Vahaamahina was probably the defining moment of this Test match. Quite what he was thinking as he elbowed Aaron Wainwright we will never know. It was needless, pointless, and difficult to comprehend, especially as his team were 19-10 to the good at the time, and on the attack……..

That moment saw the momentum shift from France to Wales.

France did not help themselves much, with some inexplicable decisions at critical moments in the game. None more so than a decision to scrum down with 7 forwards when deep in the Welsh 22 and the clock ticking inexorably towards fulltime. If they had thrown one of their big, powerful backs into that scrum…….

That French midfield was impressive, with Gael Fickou and Virimi Vakatawa, playing some powerful rugby as they dominated the midfield and their Welsh opponents, Hadleigh Parkes and Owen Watkin.

Of course, what would a rugby match at the 2019 RWC be without a bit of controversy – manufactured or otherwise. In a light-hearted moment after the match referee Jaco Peyper was surrounded by Welsh fans, and agreed to pose for a photo with his elbow raised against a Welsh fan’s jaw. It was a silly moment, yet it is probably going to cause some unnecessary backlash against the referee. He actually had a very good game. France immediately called for an investigation into the photograph.

“This photo if it is true is shocking and explanations will be necessary,”French Rugby Federation vice president Dr Serge Simon said on Twitter.

I would suggest, Dr Simon, that the focus should be on your lock and why he chose to use his elbow rather than on the referee who was left with one of the easiest red card decisions yet seen at the Rugby World Cup.

France are also questioning the try by Ross Moriarty, the substitute No 8 for Wales. They are suggesting that the ball went forward from Tomos Williams’ rip, yet neither the TMO nor Peyper could find sufficient evidence to overrule the on-field decision that it was a try. My own opinion was that it might have been marginally forward…………. Or not…….

I thought France played some of their best rugby of the tournament, the year even, as they ripped a sluggish Wales apart in the first 40.  The Welsh looked shell-shocked by the speed at which France played early on, and it took a red card moment for Wales to come back into the match.

Bluntly, Wales did not look great. They will be looking for a vastly improved performance against their semi-final opponents, South Africa.

46-14 does not really reflect this game. In fact, it could have been much worse for the Irish!

Two weeks ago my brother asked me who I thought South Africa would rather meet in a quarterfinal, Ireland or Japan. I answered that it had to be Ireland! They have been poor all year – after getting smashed twice in the 6-Nations, they have never looked like stepping back into their game. They have been poor at the Rugby World Cup too. 2018 was their year, 2019 is not.

Symptoms of an aging side?

Whilst there are plenty of kudos due to Joe Schmidt for his achievements with Ireland, he was unable to get the team to play to the same tempo and level of focus they had produced in 2018.

Bundee Aki’s suspension hurt Ireland more than anyone could have guessed before the game. It was evident that he was the glue that held a faltering backline together, with almost all their 2019 attacks revolving around his ball carrying. He was also the kingpin in their defence. The moment he was excluded from selection was the moment that Ireland’s backline plans fell apart.

It would be remiss to focus only on Ireland and their problems. This was a New Zealand masterclass!

On Saturday he showed the error in those thoughts. He was wholly in charge of the game – instructing players to line up where he wanted them, dictating the flow and direction of the game, and seemingly genetically unable to take the wrong option. He simply picked the right option every time.

Rewarded with two tries for his quick thinking and ability to read the game, he was all over the much fancied Conor Murray. It was a master-class of scrumhalf play.

Beauden Barrett might already be the best flyhalf in the world, but he is rapidly becoming the best fullback in the world too! His spatial awareness is simply phenomenal, and he knows exactly when to inject himself into play and when to stay out. His “second playmaker” role is actually that of primary playmaker for the All Blacks, as Richie Mo’unga plays the link-man who takes the ball up to the defence so that Barrett can dictate play from the second phase ball. He was very good on Saturday!

We would make a mistake if we focus on individual performances by the All Blacks. Yes, Aaron Smith was superb, Beauden Barrett was in a class of his own. Sevu Reece was quick, George Bridge was gutsy, Brodie Retallick has a huge engine, and so on. The reality is that this was a whole-team performance by a New Zealand side that is hitting its straps.

As poor as Ireland were, as good were New Zealand.

The semi-final against England will be epic.

I cannot find words to describe the suicidal rugby road Australia has travelled in this World Cup. The 40 – 16 win by England was somewhat inevitable when Michael Cheika announced his starting XV for this game. Consider that Cheika and his fellow selectors had made no less than 77 changes to their team since the start of the Rugby World Cup! This was simply a continuation of a trend that started back with the Wallabies first Rugby Championships game in Johannesburg. The Wallabies’ quarter-final against England was their tenth Test of the year, since that first Test against South Africa, the selectors had made an extraordinary 119 positional and personnel changes across the next nine Tests. That’s more than 13 changes per match.

This was not a rotational policy, such as that used by South Africa, as the changes were random and positional, rather than exchanging whole team units.

A different halfback pairing was used in every RWC game, as well as against Samoa in their warm-up prior to arriving in Japan.

Quite simply, the lack of continuity in selection contributed to setting the Wallabies up for failure.

And then Cheika chose to field a veritable rookie in the outside centre position, his first start in that position in just his third Test.

There was no logic and no continuity in selections and team unit structures.

And then there was the “game plan” – or rather the lack of any real game plan whatsoever.

Simply running with the ball every time you get your hands on it is a recipe for disaster.

England highlighted the difference between the two teams, varying and adapting their game plan according to the on-field conditions of the moment.

England are a well-coached outfit, sadly Australia were the exact opposite.

The Wallabies stayed true to the Cheika tradition, and committed rugby suicide on Saturday, ending their participation at the 2019 Rugby World Cup and ending Michael Cheika’s reign as coach.

The whole mess started right from the kick off.  Australia immediately tried to run the ball from their own 22m area, and continued to attempt to do this all afternoon.  It was simply, utterly stupid.

Invariably the English defence swarmed all over the Wallabies, forcing them into contact and pinning them back in the 22. After yet more futile attempts at running the ball out of trouble there was the almost inevitable scrambled touch-finder, and the advantage, position, and possession was handed to England.

England, with possession and territorial advantage, quickly slipped into gear and produced a masterclass of offensive-defence balanced with clever structured play and opportunism when the moment presented itself.

There was a while in the game where the Wallabies had 78% of the possession and 77% territorial advantage, but never really looked like troubling the England defensive structures. Headless chicken running was not working, and there was no Plan B.

England were calm, focussed, and intelligent, much like the prefects at a prestigious senior school dealing with some junior school rabble.

The moment of the match, for me, was a brief yet unrelenting closeup camera focus on David Pocock. The teams were setting to scrum again, there were about 30 minutes left to go, when the camera zoomed in on the Breakdown King. It was in his eyes. He knew that his dreams and his aspirations were coming to an end. Those eyes said it all.

England will face New Zealand in the semifinal on Saturday. It will be a game you should not miss.

My review of this game is published separately on this website.