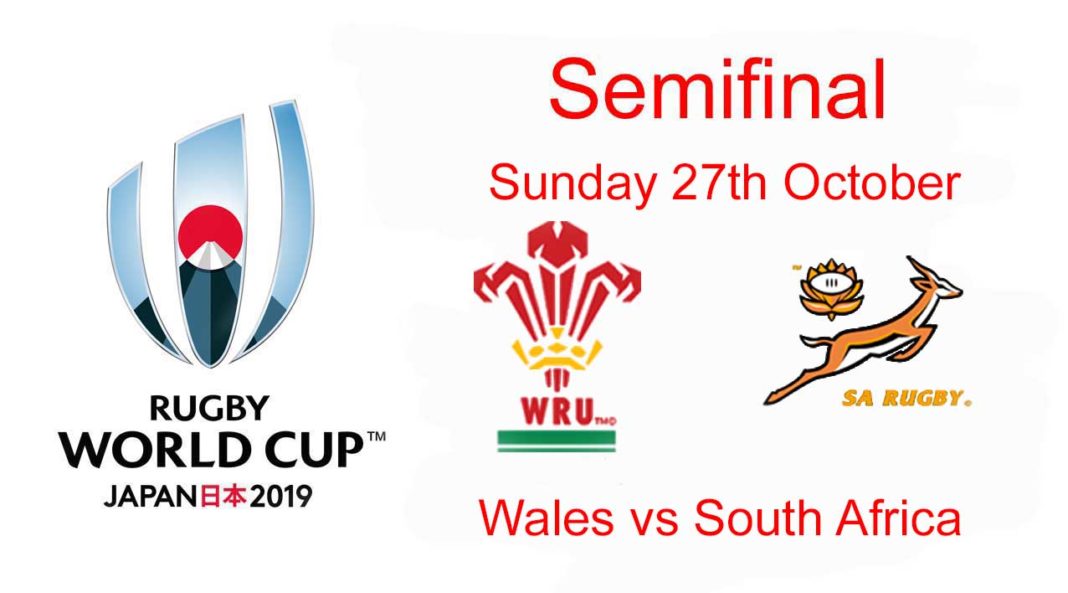 With all the hype focussed on the semifinal between England and New Zealand the media seems to have forgotten about the “other semifinal” – the one that will feature Wales and South Africa.

According to the media, and many of the fans, the clash between England and New Zealand features No.1 in the world against No.2 – with the English media having anointed England as No.1 despite their official World Rugby ranking below that of the All Blacks.

By the time you read this, the first semifinal will be history and we will know which of those teams is heading into the final next weekend. One will be No1. And the other No.2 – which will it be?

Which brings us to Sunday’s game.

Here we do have the No.3 side playing the No.4 side – in terms of that World Rugby ranking system. Wales are at No.3 and South Africa at No.4

It is interesting to think back just five weeks, when Wales arrived at the RWC ranked, briefly, No.1 in the world.

Now it is true that no team that has won the Rugby Championships has ever gone on to win the World Cup in the same year, and we have almost the same truth in the Six Nations, except for 2003 when England managed to win both the trophies in the same year.

What can we expect from this game?

Everything points to this being a physically brutal encounter with the end result decided by a moment of individual brilliance or perhaps a single mistake by one of the players.

Wales are very confident of their chances after winning all five of their previous matches at the 2019 Rugby World Cup. They thumped Georgia 43-14, before sneaking a win against Australia 29-25. They seemed a little out of sorts against Fiji, but still won 29 – 17, before banking a 35 – 13 win over Uruguay.

Last weekend, their quarterfinal was a difficult one, just managing to take down the French Tricolour by one point, 20 – 19 in a game where the winning try is still being debated by the fans.

None of these wins were wholly convincing, yet this is an unbeaten Wales, and they have a certain edge over the Springboks as they have beaten them in all four their most recent clashes.

They head up against a South African team that has played some very focussed rugby at this World Cup.

The only blip on the South African chart was their first round loss to New Zealand, a loss that could easily have gone the other way, and a game in which they will have learned that they need to stick to their proven game plan and tactics, rather than trying to play in the style of their opponents.

South Africa are the masters of the power game, and they produced it in spades last week as they absorbed everything the Japanese team could throw at them, and then ground the Japanese into the turf to secure their 26-3 victory in Tokyo last weekend.

Their game is rooted in physical dominance, and they have improved on this basic game plan with every outing.

Wales will be looking to stop that Springbok pack from achieving the set-piece and collision dominance.

We can expect a game with far more tactical kicking than the other semifinal is likely to produce. This is the way both teams have played their rugby in 2019.

Wales have made minimal changes to their starting line-up for the Rugby World Cup semi-final against South Africa in Yokohama on Sunday, with Jonathan Davies returning.

Davies is back from injury and lines up in the midfield alongside Hadleigh Parkes with Owen Watkin, who started at outside centre in the quarter-final win over France, dropping down to the replacements bench.

Gareth Davies, who is earning his 50th cap, will continue his partnership with Dan Biggar as the half-backs.

In another change to the back-line, Leigh Halfpenny comes into the starting line-up at full-back in place of injured Liam Williams, to line up with Josh Adams and George North in the back-three.

Wyn Jones, Ken Owens and Tomas Francis once again comprise the front-row, the fifth time they have started together in this tournament.

Captain Alun Wyn Jones packs down alongside Jake Ball in the second-row.

Aaron Wainwright, who has featured in every game for Wales at Japan 2019 lines up at six alongside Justin Tipuric and Ross Moriarty in the back-row.

Exciting young wing Sbu Nkosi has been drafted into the Springbok starting line-up for Sunday’s Rugby World Cup semi-final against Wales in Yokohama.

Nkosi replaces Cheslin Kolbe who has not recovered sufficiently from the ankle injury he suffered against Canada and aggravated in the quarter-final victory over Japan in Tokyo last weekend.

The 23-year-old Nkosi slots into the right wing position as a direct replacement for Kolbe.

This injury-enforced substitution is the only change to the matchday 23 that secured a semi-final place with the victory against Japan.

Both teams have everything to play for and everything to lose. Both will have to play one more game after this semifinal, and neither wants to be playing in the 3rd/4th place playoff.

There is plenty of motivation for both teams, motivation that might just border on desperation. Both coaches are leaving their respective teams at the end of the tournament. Warren Gatland is heading home to New Zealand, and Rassie Erasmus is going back to his office at the SA Rugby Headquarters to resume his job as Director of Rugby.

Both teams would love to give their coach a suitable send-off.

The Springboks have lost the services of pocket dynamo Cheslin Kolbe to an ankle injury, with Sbu Nkosi a more than adequate replacement, perhaps just slightly less accomplished under the high ball, but still a finisher of note.

Wales have lost two influential players, with Liam Williams out of the fullback slot with an ankle problem, while Josh Navidi is missing from the backrow with a hamstring problem. Both those players leave big boots to fill.

If we look at the two teams on paper, we can perhaps deduce who has the edge?

Up front we have Frans Malherbe, Bongi Mbonambi, and the Beast Mtawarira starting against Wyn Jones, Ken Owens, and Tomos Francis. Malherbe should have the edge over Wyn Jones, while the Beast should edge Francis, with the two hookers being fairly even.

However, the Springboks then deploy Kitshoff, Marx and Koch, off the bench, a formidable front row in their own right and perhaps even better in some respects than the starting trio. Elliot Dee, Rhys Carre, Dillon Lewis are good players, but they just do not carry the same potential power as do the three Bok substitutes.

In the second row Wales have Alun Wyn Jones and Jake Ball fronting up against Eben Etzebeth, Lood de Jager, with RG Snyman and Franco Mostert to come, while Pieter-Steph du Toit is also lurking around in the background. The Springboks certainly seem to have the advantage here. Adam Beard and Aaron Shingler are the Welsh forward reserves, and none can quite match the power of that Springbok bench.

So, in the tight five, the advantage seems to be heavily with the South Africans.

The case is not quite so clear-cut in the looseforwards.

The South Africans a big men, designed to bash and batter and tackle, but can sometimes seem a little ponderous. Only Siya Kolisi is a true chaser, and even he is a converted blind-sider. Duane Vermeulen is a No.8 who relishes the hard yards and the collisions, while Pieter-Steph du Toit has seemed just a little off his edge in the last two or three runs.

The Welsh trio seem somewhat fleeter of foot, and may get away from the Springbok loosies if the game opens up. They will, however, miss the mobility of Josh Navidi.

When we look at the set-pieces, South Africa seem to have the edge in the lineouts, with 57 throws and 57 taken, together with 11 steals and a formidable maul.

In open play the Springbok big men have been devastating tacklers while using their physicality to soften up opponents, one after the other.

This may well be the crux of this entire Test match. Wales have just seemed a little brittle in the forward exchanges recently.

At halfback we find Gareth Davies taking on Faf de Klerk. Davies is very quick and adept at ramping up pressure on the opposing flyhalf, while Faf de Klerk is a muscular package that is willing to take on anyone and everyone.

Both have a good pass, and both can kick well, when the mood takes them, with De Klerk perhaps lacking a bit in kick accuracy, especially later in the game.

At flyhalf Dan Biggar and Handré Pollard are very similar players, with Pollard perhaps slightly better at attacking the gain line and carrying the ball through contact. Both have an educated boot, both have an accurate goal kick.

The midfield battle might be interesting. Damian de Allende has been playing out of his skin with muscular carries and efficient distribution, coupled to strong dominant tackles and rucks over the ball. He seems to have the edge over Hadleigh Parkes. However, outside them the situation is reversed, Jonathan Davies is  going to give Lukhanyo Am much to think about. Am is a good defender, but lacks the ball carrying skills and playmaking of Davies.

Pretty even in the midfield then?

Perhaps the introduction of Frans Steyn later in the game might change the balance of power?

Out on the wings we have two totally different styles of player. The Welsh wingers are huge, powerful and fast. They are very much the modern wingers. They are direct runners who take on the outside gap and go for the corner. They are up against smaller, quick stepping, swerving turning and tumbling South African wingers. Wales do have the edge in experience, though.

At the back Leigh Halfpenny has replaced the injured Liam Williams, and is a steady performer with good positional awareness and has the pace to cause problems if given space to move. He faces Willie le Roux, who has blown hot and cold at this World Cup. When le Roux is hot, he is untouchable as he makes opportunities for others, finds holes, probes with deft little chips and grubbers, switches direction and provides the leadership his young wingers need. Imperious under the high ball on a good day, Le Roux has the natural ability and class to be one of the very best in the world.

But……… When he blows cold, then he has two left hands, both wearing concrete gloves, and his feet often go in a different direction to his head.

Of the two, Le Roux is perhaps the better defender, but a whole heap of this match-up depends on which Willie le Roux pitches up on Sunday.

On paper then, the Springbok forwards seem to be the game-changers. If they get into gear and start marching up the field, it will take more than the Welsh pack to stop them.

In tactical areas, the Springboks have excelled at defence, probably the best defensive unit in the world. Evidence of this was provided just a week ago when Japan, with 80% possession and some of the finest running stepping backs in the world, could not breach the Springbok lines, even when they had a 15 to 14 man advantage.

The Welsh defence is good, but not quite in the same league as the South Africans.

And finally, in the finishing department, South Africa, for all their “missed chances” have still scored more tries and more points than anyone else.

And that says it all.

Wales will be desperate to stop the Springboks from gaining the physical ascendency. They will have to if they want to stand a chance.

I believe that this Springbok outfit has not yet produced anywhere near their best, yet they will still have too much for Wales.

The Springboks, to win by 15 or more.