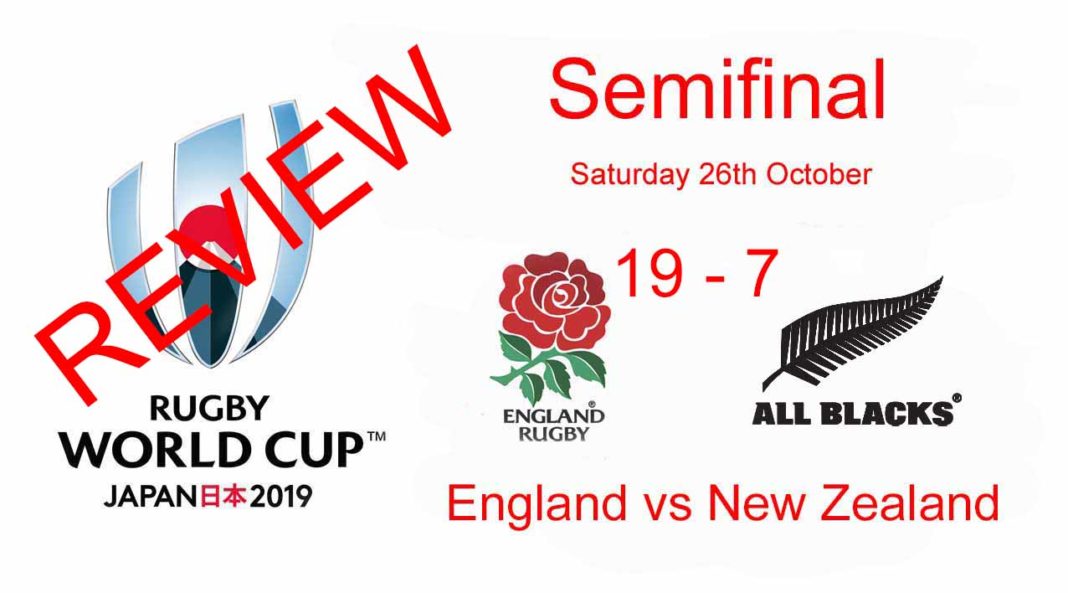 Back in 2015 I had reason to title a particular Match Review “Outthought, outcoached, outplayed and outsmarted.”

That Match Review was written after the 19th September 2015, following a magical Japanese performance of biblical magnitude as they beat the mighty Springboks 34 – 32 in what became known as the Miracle of Brighton. That astonishing victory over the two-time world champions has even been made into a film called the “Miracle of Brighton” – released just in time for this year’s World Cup.

I doubt whether they will be making a movie about yesterday’s England victory over the All Blacks. It was nowhere near as “miraculous” as the Japanese win over South Africa. This was a win by the 2ndranked side in the world over the top ranking team.

However, the title of my match review in 2015 remains equally pertinent today.

England outthought, outcoached, outplayed, and outsmarted the All Blacks.

I am not a great fan of Eddie’s – he is too brash, too sarcastic, too niggly, too confrontational and too keen to sledge his opposition for my somewhat Rugby-Puritan views.

However, I cannot argue with the fact that he is a very very good coach with a superb rugby brain.

He demonstrated this again with his planning and preparation for the All Black demolition job his team executed yesterday.

Eddie Jones quite simply outthought, outcoached and outsmarted Steve Hansen in his preparations for this game. Period.

He noted that the 2017 British & Irish Lions had identified a chink in the All Black armor – that they struggled to play their brand of open running rugby if they were deprived to two crucial rugby elements – space and time. Warren Gatland’s Lions had refined the rush defence to a fine art and their entire focus was on shutting down the All Black back division behind the gain line.

Eddie knew that this had to be a critical component of any game plan to take on the All Blacks.

He watched Rassie Erasmus’ South Africa refine the defensive strategy and challenge the All Blacks four times in two years, with 2 draws, a victory and a loss – with the total tally of points scored by the two teams in those four games being a draw!

He watched Michael Cheika use the same tactics in Brisbane in 2018.

Eddie had found the key that would unlock the All Blacks.

He watched as South Africa used their powerful forwards to rock the All Blacks back on their heels for long stretches of each of the five games the All Black and the Springboks contested in the last 24 months.

He saw the impact of taking away physical dominance from the men in black and how that served to ramp up the pressure on the backs, already deprived of room to move and time on the ball.

Eddie Jones learned the lessons spelt out by the Lions, the Springboks, and Australia too.

He then refined those lessons.

He produced an England outfit that are super fit – despite their lack of match preparation and any real test of their strengths before this semifinal, they are certainly supremely fit.

He refined his forward unit to the point where they are one of the best on the planet.

He developed a simply game plan that his entire England team could understand and buy into.

And then he planned the semifinal meticulously.

His selection of George Ford was clever – everyone was expecting the bigger, more physical Owen Farrell to take the 10 jersey and then have Manu Tuilagi running straight in the 12 channel. Jones shifted Farrell to 12 and Tuilagi to 13, so that he had two bruisers to run at the New Zealanders, with Tuilagi running at the inside shoulder of the inexperienced Jack Goodhue, targeting the space between Goodhue and Leinert-Brown.

Ford is also a more astute game manager than Farrell, the latter is a conservative kicking flyhalf, while Ford is much more tactical, a natural running flyhalf with chips, grubbers, and changes of direction too.

With his flyhalf and game manager selected, Eddie Jones then spent the week honing his team’s game plan for the big game.

And how was this plan executed?

The quick start was quite beautiful to watch. From the kick-off England attacked the All Black lines, with wave after wave of seriously focussed attacks. The pressure told, before the All Blacks could wipe the sleep from their eyes, they were seven points down. From that moment onwards the scoreboard pressure was on the All Blacks, and you could see it. They had not expected that kind of pressure and they were not sure how to handle it!

The rush defence and the pressure on the All Black playmakers was focussed and efficient. Eddie Jones had realised that the kingpins were Richie Mo’unga and Beauden Barrett, and his defensive alignment was focussed on cutting these two off from the rest of the All Black team. (The lack of a playmaking and game managing 12 hurt the All Blacks enormously – no Ryan Crotty to take the pressure off Mo’unga and split the defensive rush. Perhaps SBW should have started?)

The England pack took on the All Black lineout, looking to disrupt, to disturb, and to force errors. When Brodie Retallick, Sam Whitelock, Scott Barrett, and Kieran Read are effectively shut down, the lineout is over as a contest. Maro Itoje was superb as he ramped up the pressure time and again, well backed by Courtney Lawes.

The England pack also put immense pressure on the All Black scrum and, once again, the front row creaked, especially Joe Moody. The ball at the base of the scrum was slow and had to be protected, which prevented the likes of Savea flying off the scrum to add his running to the midfield, while Kieran Read could not head out to play in the wider channels where he has been so effective all his life.

The breakdowns simply belonged to England.

The English loose trio were awesome, with Tom Currie at the spear tip as they focussed on playing to the ball for the full 80 minutes of the game. They shut down Richie Mo’unga before he had so much as a nano-second to initiate anything, and without a playmaking 12 outside him, the All Black backline’s teeth were drawn. A semblance of order was restored when Sam Cane was sent on in the place of Scott Barrett, but it was all too late. If Steve Hansen is honest with himself, the selection of Barrett as a starting flanker was a serious tactical error.

Disciplines were out of the top drawer too. The All Blacks conceded 11 penalties to England’s 6. Perhaps the most important aspect to the penalty count was the field position of the penalties. England were able to convert four of the penalties into points.

That is the story of this game. When someone made a mistake, the opposition scored. England made one mistake, Ardie Savea scored, the All Blacks made plenty of mistakes, England scored plenty of points.

Yet another part of Eddie Jones’ meticulous planning and thinking was evident in England’s lines of attack. New Zealand do not like being attacked around the fringes of the ruck. And that is exactly what England did! They used the pick-and-go, they used close-in pods of forwards, they offloaded to the side and out the back, they played off-the-nine rugby.

Owen Farrell and Manu Tuilagi used an out-in line of attack, going back into the traffic time and again. They are big, strong men who are solid on their feet, and they forced the All Blacks to stand up in the tackle to stop them. The sucked the All Black defenders in, and that earned the team the right to go wide.

Simply, it was a masterclass of superb execution of a well-constructed game plan.

The final piece in the puzzle was Eddie’s focus on the mental preparation of his team. In the week before the game he drew all the media attention onto himself. He did the digging and teasing and fronted up to the media and fans. With the glare of the spotlight removed from the team, they were allowed to focus on the rugby and nothing else. This allowed Jones and his coaches and assistants to work on the team’s self-belief, and they did a great job of it!

This England team were very different to the team of 2015. There were none of the jittery nerves we saw in the tunnel before 2015 games.  This 2019 team acted like they had nothing to lose and their body language, intent, demeanour and their focus was wholly one of total belief in who they were and what they were trying to do.

And that, perhaps, is Eddie Jones’ biggest achievement with an England outfit that so often promises much but fails to deliver.

Perhaps the single biggest accolade one can give England after this momentous win was that they reduced the best attacking team in the history if rugby to a somewhat panicky, somewhat dishevelled, somewhat scrappy outfit that started to make rash decisions and silly mistakes.

They got inside the All Blacks heads, and anyone who was watching could see it.

It was in their eyes.

England outthought, outcoached, outplayed, and outsmarted the All Blacks.

He had some fun out there, introducing real pace when he was given the ball, and always looking for the extra yards.

A battle-tank of a man, he kept the All Black midfield on the hop all afternoon. Strong on defence too.

Was the man who managed and controlled England’s onslaught from the kick-off. Ran some dangerous lines.

Brilliant. His partnership with Curry has been one of the special moments of the 2019 World Cup.

Silly dummy run ruled out a possible try for his partner Underhill. The rest of his game was brilliant. Won turnover after turnover, and made tackle after tackle.

My Man of the Match. A constant menace at the breakdown and in every maul. Super lineout performance, and some great tackling. A big engine.

For once, there were no stand-out performers in the All Black 23 that were worth a special mention.