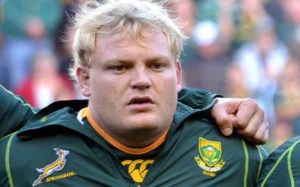 Adriaan Strauss has announced that he will be retiring from all forms of professional rugby at the end of the 2018 Super Rugby season.

Strauss retired from Test rugby at the end of 2016, but continued to play Super Rugby for the Bulls into 2018.

His 2018 Super season reminded us just why he was so highly rated throughout his career, and his retirement announcement comes as something of a surprise as many though that he might reconsider his retirement and again throw his hat into the ring for Springbok selection for the 2019 Rugby World Cup.

Born in Bloemfontein in November 1985, the 32-year-old started his professional rugby career in the Bulls junior system in 2004, going on to make his Super Rugby debut in 2006, playing in eight Super matches for the Bulls before returning home to Bloemfontein in 2008 to join the Cheetahs, representing them in 97 Super Rugby outings. He captained the Cheetahs for many seasons until the end of 2014, when he announced that he was returning to Pretoria and the Bulls.

He added to his 97 Cheetah Super caps with another 51 Super caps for the Bulls, making him the most capped South African Super Rugby player of all time, with 156 caps to date.

Strauss captained the Bulls in 2016 and 2017, and was also appointed as the Springbok captain in 2016, becoming the 56th captain of the national team.

Despite his proven credentials as a captain, his tenure as captain of the Springboks was a miserable one as it coincided with the Allister Coetzee era and a team that seemed rudderless and at odds with itself.

Adriaan Strauss will be remembered as an honest, hard-working, committed and loyal rugby player.

Enjoy the time off Adriaan, you deserve a great retirement.