Home Big Opinions Are The All Blacks Treated Differently? 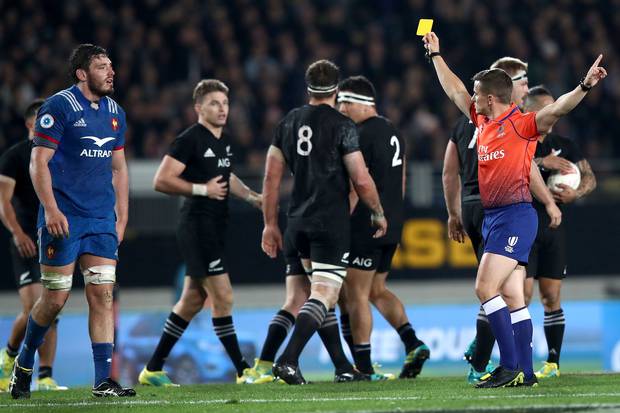 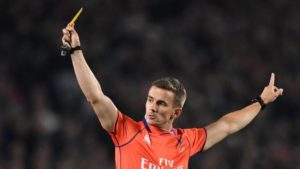 When the All Black coaching team feel the need to comment about allegations of double standards and refereeing leniency towards their team, you know that a nerve has been touched. Both Steve Hansen and his assistant coach Ian Foster have defended their team against the accusation that they play dirty, cheat, and get away with it because the referees tend to be lenient towards the All Black jersey.

Steve Hansen brushes off the furore, saying that he has heard it all before and simply accepts that as the world’s number one side, the All Blacks cannot escape the scrutiny, valid or not.

“We have been called cheats for 100 years haven’t we? If you keep winning, people will find reasons I suppose,” he said.

Hansen’s assistant coach Ian Foster goes further, claiming that the All Blacks were the one of the most heavily punished international sides in 2017.

He mentioned that the All Blacks received nine cards – a red and eight yellows – in 14 tests in 2017.

Foster said his side worked tirelessly on getting their tackle heights right.

“You have to ask the referees that but clearly we don’t think we get any favours from the referees at all,” he said. “They’ve got a tough job and I don’t know a top referee that doesn’t go out there just ref it the way he sees it.

“If you look at the penalty counts and yellow cards last year – weren’t we one of the top yellow-carded teams last year? I’m not sure how this ‘soft on us’ comes into fruition.”

Foster added: “It’s hurt us, yellow cards. We’re like other teams, we don’t like going down to 14. It’s something we work hard to make sure technically we’re as sound as possible.

“Our players are like others – sometimes bad technique takes over.

“Our expectation is if we go high we’re really susceptible to the punishment that everyone else gets. I think we’ve been pretty open and honest with how we interpreted last week.”

Of course, Hansen and Foster will say such things, they will say anything to deflect the pressure and attention away from their team.

Foster is correct, along with Argentina, the All Blacks were the most heavily carded team in 2017. That might be because the referees were focussed on them…. Or was it because the All Blacks are a team that pushes the outside of the envelope of legality far more often than most? Do they play right to the edge of what a referee will allow, and then see if they can push it a bit further?

There is nothing wrong with doing that. It is what a good team will do. You play to the whistle.

But when the whistle is a little shriller and louder when the opposition do something wrong, fingers start pointing!

In previous articles I have suggested that the SANZAAR judiciary are particularly lenient towards New Zealand players. I have quoted various incidents and judicial findings, with the New Zealanders seeming to get much lighter sentences for similar transgressions that earn players from other countries extended sentences. (You will find details in three different articles on this website titled: “It’s Broken, Fix It.”  “It’s Broken,” and “It’s Still Broken.”) It is akin to slapping them on the wrist and saying “naughty boy” and then beating the hell out of the rest of the players in the world!

On Saturday the controversy about refereeing inconsistencies and accusations of double standards and dirty play again reared its ugly head.

Despite the All Blacks turning in 30 minutes of absolutely sublime rugby, a master-class of slick interplay and superb running lines, their 52-11 victory is inevitably clouded by two incidents.

Two incidents where the rookie referee Luke Pearce responded differently from the first to the second, to what were supposed breaches of the same law. 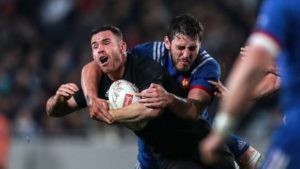 When France’s Paul Gabrillagues was yellow carded for a high tackle, despite the fact the initial contact on Ryan Crotty wasn’t high, even the Kiwi commentators said the card was harsh. In real time, perhaps, the tackle looked bad, but on the replay, it was borderline whether it was even a penalty.

There was a certain amount of Oscar-worthy acting by Ryan Crotty in the moment of the tackle. Crotty threw his head back in hugely exaggerated anguish, and went down in a dramatic heap, which made for a great photograph and also brought the Eden Park crowd to their feet with a roar. He could do soccer, could Ryan Crotty!

Pearce had absolutely no hesitation in reaching for his pocket and whipping out the yellow card. He did not bother to ask his TMO for a replay, he simply reacted to the roar of the home-crowd and Crotty’s pained expression.

Quite what Officious-George Ayoub, the perennially interfering TMO was doing at that moment we will never know. The question has to be asked why he did not intervene? He loves to get involved, but this time he did not. Why? He had the technology, and he had a microphone that spoke directly into the referee’s ear, yet he remained silent.

If even the All Blacks admit that Gabrillagues should not have been shown the yellow car, how did the match officials get it so wrong? 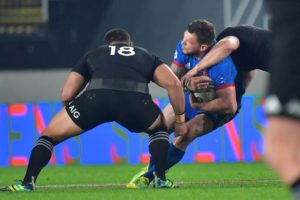 How did they get it all wrong again, just 7 minutes later when a double hit by Sam Cane and Ofa Tuungafasi on Remy Grosso resulted in the French wing fracturing his skull in two places? Surely this was a moment for which the TMO was invented? Surely any referee worth his salt would have had another look at the incident, just to be sure?

Why then, the refusal of referee Luke Pearce to use the TMO to support his decision-making?

And then there is the niggling question as to why neither Sam Cane nor Ofa Tuungafasi were cited by the Citing Commissioner? Anybody who looks at the television footage of the incident must be asking why it is not being reviewed?

Steve Hansen might say” “I can understand that they will be a little miffed when their guy got yellow carded. But as I said last night, I don’t think their guy should have been yellow carded,”

“Nor do I think that Ofa should have been yellow carded either. Our game is fluid and there is movement in it and when you get two guys coming into make a tackle on one, things can change late and I think that is what happened.

“Sam made the tackle and Ofa ended up hitting him [Grosso] in the face with his shoulder accidentally. There was no intention to hurt him.

“Unfortunately it is one of those things. All three of them got head knocks. When the game is fluid like it is and players change their angle late, and you have committed, especially if you are a big guy it is difficult to get out of the way.”

Somehow the incidents on Saturday brought back memories of 2013. South Africa were making life very difficult for the All Blacks when Bismarck du Plessis was given a yellow card for a perfectly legitimate tackle on Dan Carter.

Later in the game, when Liam Messam threw up his arms and prop Tony Woodcock made a forearm gesture, the South African received a red card. The TMO was very quick to get involved and recommend a card despite all the evidence being that everything was perfectly legitimate? Yep, you guessed it, the TMO was none other than Officious-George Ayoub.

But where was George on Saturday? Was he quiet because it was a couple of All Blacks that were involved?

Sadly, if the referee and his team of match officials had done their jobs properly, if Paul Gabrillagues had stayed on the field and Sam Cane or Ofa Tu’ungafasi had been carded, the whole double standards accusation would never have arisen.

Adding fuel to the fire is the opinion of former international referee Rob Debney. In his opinion Ofa Tu’ungafasi should have been shown a red card for his tackle on Remy Grosso.

Writing in The Times, he added that it seemed to him that the world champions “seem to get away with murder”.

Debney, like everyone in and around the game, said referee Luke Pearce erred in giving French lock Paul Gabrillagues a yellow card for an allegedly high tackle on Ryan Crotty at Eden Park.

Debney wrote: “Pearce was wrong not to send off Ofa Tu’ungafasi, whose use of a shoulder in a double tackle on Remy Grosso left the France wing with two facial fractures.

“Yes, Grosso was falling in the collision but the onus is on the referee to make his ruling based on the outcome of an incident.

“Intent is not material in the decision. Did Tu’ungafasi’s shoulder connect with Grosso’s head? Yes. Red card.”

(Debney made no mention of Sam Cane, who also caught Grosso high in the same incident during Saturday’s first of three tests.)

Debney said: “Once again the conversation is being dominated by claims that New Zealand always seem to get away with murder.

“If I had an answer as to why there appears to be a leniency towards them, I would be a professor in psychology, but it exists on a sub-conscious level. The accountability for taking a decision against them, the scrutiny it comes under compared with other teams, is incredible.”

Of the Gabrillagues yellow card Debney said Gabrillagues had performed a ‘seatbelt tackle’, with one arm over Crotty’s shoulder and around his torso.

“But his arm was nowhere near Crotty’s neck. Pearce would have realised that, had he taken more time and checked the replay,”

Before you dismiss Debney’s opinion, he has the pedigree to talk about referees and refereeing. In 2000 he was the second youngest member of the Panel of National Referees and his first international appointment was as assistant referee for Tony Spreadbury in the Spain v Russia RWC qualifier in October 2002.
Debney has refereed the Under 21 World Cup 2003 final between New Zealand v Australia, He officiated in Test matches, three IRB Sevens tournaments and 20 age group internationals.

Of course, there are always two sides to every argument, and Steve Hansen and Ian Foster, together with a goodly slice of the New Zealand rugby media and the “Keyboard Cowboys” who comment on all the media articles declare the innocence of the men in black, suggest that it is anything from jealousy to fear that makes the rest of the world question whether the All Blacks are somehow a protected species when referees, their teams of match officials, the citing commissioners, and the judicial officers deal with transgressions. They almost assume the role of a victim of unreasonable attention and focus. “We are being bullied!” might well be the cry.

The truth is simple.

A young referee made a couple of very serious mistakes in the Test Match between New Zealand and France.

His mistakes probably did have a huge influence on the game, if not on the eventual outcome.

He was not usefully and ably assisted by his fellow Match Officials, least of all by the TMO George Ayoub.

If a case is to be made against the referee, it should be one of inexperience, while the case against the TMO should be for gross incompetence and dereliction of duty.

The postscript to that truth is that there is more than a perception that the All Blacks and New Zealand rugby players in general seem to get treated with kid-gloves in matters disciplinary.

Justice must be done, and it must be SEEN to be done.

Until that happens with visible and testable equality, the stigma of favouritism will cling to that famous black jersey adorned by a silver fern.