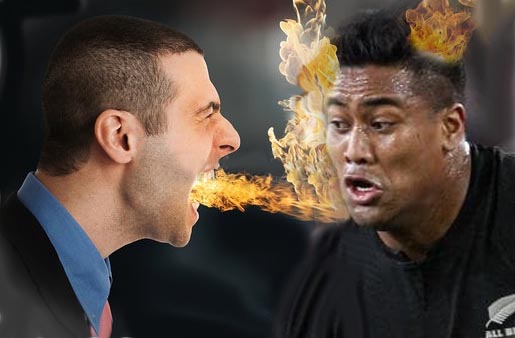 If anybody wants to figure out what is wrong with French rugby they could start by looking into the relationship between Mourad Boudjellal, his Toulon outfit, and French Rugby in general. They could do well to look at Mr Boudjellal’s relationship with his players and coaches too.

Boudjellal is the kingpin in the club-before-country movement, and has recruited more foreign players into French club rugby than anyone else you could name, and then objects to their being released to play for their country in terms of the World Rugby bye-laws. He does not even want his few French players to represent France!

His efforts, the combined impact of importing as many players as possible and the refusal to cooperate in the national interest has contributed directly to the downward spiral of the French national team, as well as the ruination of Toulon as a primarily French club.

His recruitment of foreign players is built on the wobbly foundation of “money buying trophies” – a system that has not really worked too well for him, nor for a number of rugby and football clubs that I could name. (Manchester City?)

The reality is that he has constantly sought to recruit a couple of ex-All Blacks, a few ex-Springboks, and a handful of others from across the globe and hope that the recruits will bring him the trophies and the glory he so desperately craves.

The problem is that those southerners, the Kiwis and the Boks, the Aussies too, thrive in conducive rugby conditions, conditions that put the game ahead of the glory. None of the recruits relish the dog eat dog tribal mess that is French rugby. They do not always fit into the French scheme of things.

Sometimes the recruitment drive has bought a spectacular player – Bryan Habana and Duane Vermeulen spring to mind, but all too often Boudjellal’s money has bought something less than expected.

Wise heads pointed out that Julian Savea, for all his wonderful exploits as a younger, leaner, hungrier player, has been something of a disappointment for some four years or so. After a spectacular couple of years when he arrived on the rugby scene, he has slipped steadily back from the standards that he himself set. He showed up at the Hurricanes pre-season camp in 2015 overweight, and completely unfit, so much so that he was left out of the Hurricanes playing squad and sent off to lose weight and get fit. He did make it back to something close to his peak form later in 2015, but in 2016 he repeated the exercise, showing up carrying a lot of Christmas pudding around the middle and under his jaw, and way off the expected pre-season fitness levels required by his employers. Once again, he was sidelined by his coach in the early season games.

He found himself further and further out on the fringes of the All Black squad, and eventually lost his place to more committed and focussed individuals.

Small wonder then that the Hurricanes, and the All Bkacks, did not fight too hard to hang onto him when Mourad Boudjellal came calling, cheque book in hand?

Watching Savea in the French Top 14 showed a man who seemed disinterested, and lacking in motivation. He seemed to be simply going through the motions, nowhere near fit enough for Super Rugby or the international game, but perhaps just fit enough for the slower French club game.

The Julian Savea who had scored 46 tries in 54 Tests for New Zealand has somehow managed just two since joining Toulon in August last year.

Watching him give up the chase when an opponent broke past him two weeks ago told of a rugby player who has lost his desire.

It is a sad thing to see a relative youngster blow his career the way Julian Savea has blown his.

Not so long ago, Julian Savea swept through tacklers with a muscular ferocity that was compared to the great Jonah Lomu. When an All Black team was chosen, his name as an automatic entry on the team list.

When the wheels started to come off in 2016 and into 2017, after initially offering support and advice, the All Blacks selectors ran out of patience. Julian Savea was left out of starting teams, initially coming off the bench, and then he was simply left out of the match-day squad altogether. In 2017 he made just two appearances for the All Blacks, scoring a solitary try.

His 46th and final appearance for his country was in the first test against the British and Irish Lions in Auckland.

He still played for the Hurricanes in 2018, but the writing was on the wall for anyone who cared to read it. He was no longer an automatic match-day selection for the ‘Canes.

At the end of the 2018 Super season, he was willingly granted a release from the remaining two years in his contract with NZ Rugby, and left for France to play for Toulon.

It was a far from happy transition to rugby life in France.

And it all blew up this past weekend when Mourad Boudjellal launched a scathing attack on the former All Blacks star, suggesting he was going to ask for a DNA test after Toulon lost to 19-10 Agen in the Top 14 match at the weekend.

“They must have swapped him on the plane [when he joined from the Hurricanes last year]. If I were him I would apologise and go back to my home country,”Boudjellal told a French radio station. “I’ve told him that he was free to go and wasn’t welcome at Toulon any more,” he added.

Savea is publicly vowing to stay at the club and fight for his place, but this might just be empty words. “Putting all the negativity behind me and heading into this week with a positive attitude,”Savea tweeted.

“Whether I am welcomed or not, I am still contracted to my team and I will continue to train week in and week out with my brothers.”

Sadly for Julian Savea, If Mr Boudjellal wants him out, he is probably not going to play for Toulon again.

Which brings me back to my opening paragraph.

“If anybody wants to figure out what is wrong with French rugby they could start by looking into the relationship between Mourad Boudjellal, his Toulon outfit, and French Rugby in general. They could do well to look at Mr Boudjellal’s relationship with his players and coaches too.”

Mr Boudjellal’s game plan for Toulon is based on buying players to win trophies. The strategy has not worked too well of late.

One wonders if he is actually doing his homework and practicing “due diligence” when recruiting players? Did he have a good look at Julian Savea’s recent form before he made an offer to purchase his services?

Has he had a good look at the physical condition of his newest signing, Nehe Milner-Skudder, who is one of the most injury prone players in the world?

Another question that must be asked is whether Boudjellal’s public attacks and  condemnation of players that do not meet his stellar expectations is perhaps going to be frightening off future prospects?

“Business or not, you just don’t treat people like this,”he tweeted.

The New Zealand Herald’s Patrick McKendry said Savea’s treatment would serve as a warning to all players contemplating an overseas move.

Another New Zealand scribe echoed the sentiment, “You wonder if Toulon really know what they’re getting this time either,”he wrote of Nehe Milner Skudder’s looming move to Toulon.

“Fingers crossed Boudjellal likes this new toy better than the last one.”

And then there is the woeful form of the French national team.

Is the era of unrestricted importation of foreigners into French rugby coming to an end?