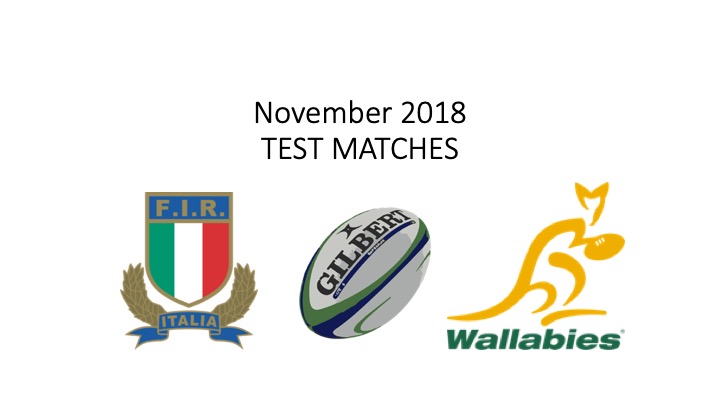 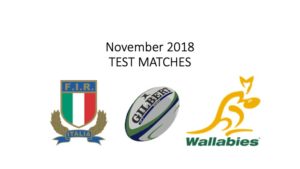 I really do not understand Australian rugby at this time.

Yes, a win is a win, and the Wallabies will take any win they can get right now. They might even suggest that beating Italy by 26-7, with a four tries to one advantage, is good enough, perhaps even impressive given their run of dismal results in 2018.

However, they still showed remarkably little enterprise and focus as they downed lowly Italy.

For long period of this Test Italy actually outplayed and outthought the Wallabies. There were long stretches where they looked a better side than the visitors from Down Under, and that must be a seriously worrying fact for their fans, if not for coach Michael Cheika and his management cohorts.

Michael Cheika’s message to England was “let’s get it on” after the Wallabies beat Italy 26-7 on Saturday. He seemed upbeat after the game: “I enjoyed it, it was physical,” he told reporters. “Defensively I thought we were really good, we got up and looked like we were enjoying our defence.

“The Italians brought a lot of physical ball carrying, they’ve got big back-rowers, they carry the ball hard, and we looked good.

“We created a few things in attack, we had a couple of chances we could have been slicker on with our finishing but where we are right now we’ve just got to keep grinding, keep at it, do the things we know that we we’ve been working on to do well, and keep bringing it.”

I do wonder whether he was watching the same game I saw on my television set? Maybe something was lost in the electronic transmission?

He went on to say: “Now we have to look to see what we need next week. We love going to Twickenham, love the crowd hating us, so let’s get it on!”

From my point of view, the Wallabies would rather not be playing England next weekend – a trip home would be vastly preferable to a visit to Twickenham after this display against Italy.

Italy were denied tries twice in the first twenty minutes of this game, in the seventh minute when Braam Steyn was ruled to have a foot in touch before he grounded the ball in the corner, the second in the 14th minute by a clear refereeing error by Pascal Gaüzère. He ruled that Tito Tebaldi was offside when he intercepted a poor pass by Jake Gordon off a lineout. Television replays show that Tebaldi was clearly onside, but the referee had blown his whistle and awarded the penalty, without asking his TMO for an opinion.

Imagine the effect of Italy leading by 14 to 0 after just 14 minutes? The Wallabies have shown a certain mental frailty throughout 2018 and to go so far behind so early in the game might just have been the proverbial straw on that Wallaby back.

Imagine too the galvanising effect such a lead would have had on Italy?

The Italians dominated most of the second half, despite the Wallabies deploying some of their bigger guns off the reserve bench to try and shore up the listing ship.

The 26-7 scoreline flatters the Wallabies.

Yes, they did have their moments. The ten minutes before half time and the five minutes immediately after the break saw the Wallabies score three of their four tries in a 15-minute period of play, from the 30th minute to the 45th as Marika Koroibete scored twice and Taniela Tupou crashed over in a typically storming run.

Those three tries were well taken, but each try will give an indication of what is wrong with this Wallaby team. When they did manage to put together some flowing rugby, they scored, but it was all far too little from the Australians. Taniela Tupou’s try was a great effort, and showed his power and determination, but……. In the lead up to that try, when the same Tupou gave a somewhat strange floater of an offload, Australia were lucky to get away with a clear obstruction by David Pocock, that prevented the Italian defender from reach Tupou before he made the offload.

As far as sparkling play by the Wallabies, that was about it.

No doubt they would have been pleased to leave Padua with a win but the questions they needed to answer, remain unanswered.

Was the choice of Matt Toomua at flyhalf and Bernard Foley at inside centre a success?

Foley at flyhalf is wholly predictable for 97% of a game. He simply shovels each and every ball straight on to his inside centre. But there is a 3% chance that he might do something different, just a moment of sparkle, a step or a jink.

Matt Toomua was 100% predictable. He was almost a carbon copy of the 97% Bernard Foley, simply a ball shoveller. To compound matters he stood way too deep, even deeper than Kurtley Beale when he was tried at flyhalf, often more than 10m back from the gain line. Toomua did not attack the gain line once in the game. He brought nothing suggesting the experiment was worth repeating in another Test.

As for Bernard Foley at inside centre? I guess we need to be blunt, again. This was a dismal failure. The seventh minute of the game saw Italian fullback Jayden Hayward counterattack from his 22m line after a misdirected kick by the Aussies. He ran straight at, and then through and past Foley as if the latter did not exist.  Foley later went on to contribute the error that gave Italy their try. It was not a good day for the flyhalf playing in the midfield. He did not quite understand when he should straighten the line and when he should pass the ball, often seeming totally bewildered by the requirements of Test rugby in the 12 jersey. Foley simply does not have the power and the size to dominate the middle of the field required in this position.

It seems that Foley is the proverbial one-trick pony. If he cannot play flyhalf, he should not be in the Match-Day squad at all.

Another Wallaby from whom much was expected, yet so little was delivered is Israel Folau. Whilst some of the stats might suggest he had a fairly good day, there are moments in the game that belie the statistics.

There was an early offload attempt that went into touch, with no accuracy in the execution.

In the 26th minute he joined the line, made the hard yards, took the play to within meters of the righthand corner, and Australia should have scored, except that he gave a one-handed floater of a pass that was intercepted by Italy.

How did Italy chase him down when he intercepted the ball in the 71st minute? Not only did they chase him down over some 40 meters, but he simply went to ground when he was touched by the chaser’s arm, it was not even a proper tackle. He must have known the chaser was looming, why no swerve, no step, no attempt to mislead the defence. He was simply run down from behind.

On current form, the Wallabies’ attack is more reliant on the individual crashball running efforts of Samu Kerevi and Marika Koroibete than on anything Israel Folau brings to the table.

This was simply not a Wallaby effort that will give the more critical of their supporters much hope for the test against England next weekend.