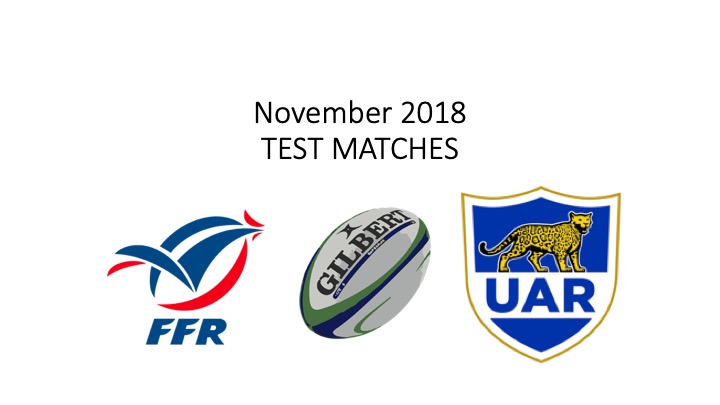 An intriguing game awaits us as the Argentine take on France.

France ran the Springboks very close a week ago, and the Argies gave Ireland a run for their money too. This game may provide us with a measure of both teams and their development in 2018.

Have the Argentineans improved as much as the 28-17 result against the Irish suggests? Yes, the Irish won, but it was a patchy, laboured effort with plenty of inaccuracy and errors. Or was it that the Pumas have stepped up a couple of notches and gave the world No.2 ranked side a bit of trouble?

Have the French improved as much as the last gasp win by South Africa suggests? Or was it a Springboks outfit that was struggling with fatigue and end-of-year errors?

The measure of both the French and the Argentineans may rest on this Test. For one or both of the teams their progress in 2018 will be seen as two fairly evenly matched squads go up against each other.

France and Argentina have been grouped together in Pool C for next year’s World Cup, and the winner in Saturday’s clash will gain something of a psychological advantage.

France coach Jacques Brunel has made two changes, both in the backline, to his starting XV to face Argentina on Saturday.

Damian Penaud, who hurt his ankle in the first half of the clash with the Springboks last weekend, has been ruled out and his place has been taken by Yoann Huget on the left wing. Meanwhile, Gael Fickou comes in for Geoffrey Doumayrou at 12.

Montpellier’s Benjamin Fall has been promoted to the reserves to provide backline cover. Talismanic hooker Guilhem Guirado, who scored a fine individual effort last weekend, will again captain the side.

Gonzalo Bertranou is the only new face in Argentina’s starting XV for Saturday’s clash with France.

Los Pumas were beaten 28-17 by Ireland last weekend, but coach Mario Ledesma has nevertheless stuck to his guns.

Having been promoted from the bench, Bertranou trades places with Tomas Cubelli, who started at scrum-half against Ireland. Another alteration to the substitutes sees Mariano Galarza replace Joaquin Diaz Bonilla.

2018 has largely been a successful year for Mario Ledesma as he rejigged his Jaguares team and gave them a focus and purpose that had been missing in their previous Super Rugby campaigns. It was their most successful season yet. When he was parachuted in to take over the Pumas, largely the same players that he worked with at the Jaguares, he also managed to get them to step up a gear or two. They had their best Rugby Championships ever, albeit with just two wins. He will be hoping that his players can rediscover the form which led to those victories over Australia and South Africa during the Rugby Championship.

Last weekend France produced a masterclass in how to snatch defeat from the jaws of victory when they could not close out the Test against the Springboks. They rattled in the last frantic minutes of that Test and very nearly gave the Springboks three tries, rather than the solitary one that won the game for the visitors from Africa. France have now lost five Tests on the trot, and are desperate for a win to get their November season going and to lay a foundation for the looming Six Nations.

Both teams have solid packs of forwards, although the Pumas are struggling to find the cohesion and snap that used to be a trademark of their rugby scrum. Both team’s struggled in the scrum last week, and now have an opportunity to sort out this aspect of their game.

The lineouts are almost a mirror image of each other. Both teams like to play a disruptive role in the lineouts, attempting steals and working to get in between their opponents on the jump and thus lessen the power of any maul or drive off the lineout. They should test each other thoroughly!

Both teams will clatter into each other in the midfield collisions, using their forwards to play attritional rugby. The Argentineans have a slight edge over the breakdown where they have the poaching skills of Augustin Creevy to compliment Desio and Matera’s ball stealing skills.

France have the impressive Artur Iturria on the flank again, but he is not really a ball-stealing player, being a more in-your-face defender.

At the back two players to watch will be Camille Lopez up against Nicholas Sanchez. Both have the ability to dictate the game and take it away from an opponent.

Argentina have learned to play counter-attacking rugby as they have often had to live off the scraps in both Super and Rugby Championships encounters. This counter-strike ability might cause huge problems for the French.

This is a toss-up.

On paper I find very little to choose between the teams, so I would suggest that the game will be decided by fitness and freshness, along with home ground advantage.

The Pumas have had a long season, as this same side played together for most of the Super Rugby season too. Fatigue will be the killer.

France will win, but it may be close, 7 points or so.