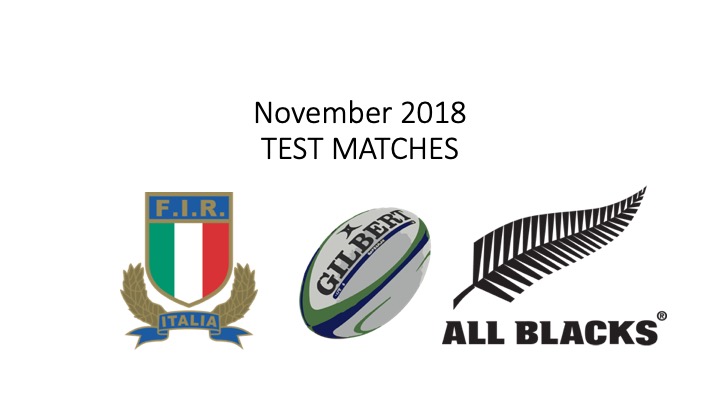 Italy face off against New Zealand on the back of a feisty performance against Australia where they dominated large stretches of the game, but could not convert that domination into a winning formula. The Azzurri just did not seem to have the final finishing and the required mongrel to turn the game in their favour against a ragged Wallaby outfit. Admittedly, Australia are at the back end of their worst season in living memory, and needed a win, any win, just to change their stats marginally. Their record has now improved from a 3 from 11 record to 4 from 12. That win means that their 27% win to loss ratio improved to a 33,3% ratio.

However, this preview is not about Australia, it is about Italy and New Zealand.

The loss to Australia has resulted in Italy now having a 2 from 10 winning record in 2018, just a 20% win to loss ratio.

And now they face the All Blacks.

An All Black outfit that is hurting.

That should be enough to worry any Italian rugby supporter.

When the All Blacks are hurting, they seem to come back with some very serious intent against whoever is their next opponent.

In 2016 the Irish beat the All Blacks at Soldier Field in Chicago, of the 5th November. The score was 40-29. A week later, on the 12th November, the All Blacks arrived in Rome, at the same Stadio Olimpico where they will face Italy this weekend, and they simply slaughtered the Italians 68-10

On the 1st of July 2017 the British Lions beat New Zealand in Wellington 24-21. The teams drew the next Test 15-15 at Eden Park, and then the All Blacks went over to Sydney and demolished Australia 54-34 on the 19th August.

On the 21st October Australia beat the All Blacks 23-18 in Brisbane. It was France that suffered the backlash, 38-18, three weeks later at the Stade de France.

And then, famously, the Springboks beat the All Blacks in Wellington, 36-34 on the 15th September 2018. It was Argentina next, 35-17 to the New Zealanders, two weeks later, in Buenos Aires.

One has to go back to 2011 to find the last time the All Blacks lost back-to-back Tests, against South Africa 18-5 and then Australia 25-20 in August of that year.

Based simply on the All Black track record for bouncing back from a loss, together with their enviable record for not easily losing back-to-back Tests, the Italians are on some kind of Mission Impossible.

And there is an element of history repeating itself in this game. In 2016 the Irish beat the All Blacks. A week later the Italians hosted the All Blacks at the same Stadio Olimpico…………………..

The scenario is the same, will the outcome be the same again?

Of course, if Italy win, there is the possibility of a movie script and a reworking of the Mission Impossible franchise!

Italy have made one change to their starting line-up that will face New Zealand at the Stadio Olimpico on Saturday.

Connor O’Shea sticks with the rest of the starting XV that went down 26-7 to the Wallabies but makes one bench tweak, Edoardo Padovani replacing Carlo Canna.

Coach Steve Hansen has made eleven alterations to his starting line-up for their Test against Italy on Saturday. Just two backs, Beauden Barrett and Damian McKenzie, and two forwards, Kieran Read and Ardie Savea, remain of the starting team from last week.

In the forwards, props Ofa Tuungafasi and Nepo Laulala combine with hooker Dane Coles in the starting front row, with props Karl Tu’inukuafe and Angus Ta’avao, and hooker Nathan Harris to provide front-row impact off the bench.

Scott Barrett and Patrick Tuipulotu are in the second-row, with Brodie Retallick on the bench. (Sam Whitelock has gone home to rest.)

In the loose forwards, Vaea Fifita starts at six, Ardie Savea is again in the seven jersey and Captain Kieran Read is at number eight.

Dalton Papalii will provide loose forward cover off the bench.

In the backs, scrum-half TJ Perenara starts, with Te Toiroa Tahuriorangi in the run-on reserves, as Aaron Smith sits this Test out.

Beauden Barrett is at 10. The midfield comprises of Ngani Laumape and Anton Lienert-Brown, with the back three is made up of Waisake Naholo on the left wing, Jordie Barrett on the right and Damian McKenzie at full-back.

The other run-on back reserves are Richie Mo’unga and Rieko Ioane.

Yes, Italy produced a feisty performance against the All Blacks.

Will they do it again?

Will they be able to run the All Blacks close?

Despite the sweeping changes to the All Black starting XV, there is not a single name on the team sheet that cannot and has not started a Test for the All Blacks before. Such is their depth.

The backline retains two of the best playmakers in the world, with Barrett and McKenzie able to rip any defence to shreds if the moment arrives. Yes, they have looked a little jaded on this end-of-year tour, but fatigue does not eradicate class, it simply brings the gifted player a little closer to lesser mortals.

The midfield combination is as good as any, with the powerful running and finishing of Ngani Laumape and the sure-footedness of Lienert-Brown likely to complement each other. The finishing of Waisake Naholo cannot be doubted. Jordie Barrett is big, quick, and has a point to prove.

Up front, the tight five might have been rejigged, but it has more the look of a rotation rather than a rethink.

This remains a formidable All Black outfit.

And the rejigged lineup contains a number of well-rested individuals, who have had a couple of weeks carrying the tackle-bags and watching from the grandstand rather than pounding the hard yards out on the track. Fatigue might be less of an issue this week!

The Italian team are pretty much unchanged from last week, and are likely to bring the same game plan, the same attitude, and the same level of adventure.  I do not think that the same-old-same-old is enough this week.

The All Blacks, by around 25 points.