Home Provincial Australia Reds Pay Cooper to be a Rebel

Reds Pay Cooper to be a Rebel 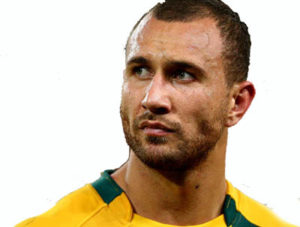 Quade Cooper is one of the most divisive rugby players on the planet. Either you like him and love his unorthodox approach to the game and life in general, or you do not. I confess to falling into the latter category, not that I know the man personally, nor am I influenced by some of his off-field shenanigans, but I do not rate him terribly highly as a player.  For me his unorthodoxy is highly predictable and thus easy to defend, and there are just too many glaring holes in his overall game to earn him my admiration.

We also know that he is considered something of a locker-room lawyer who is not beyond stirring up players against the coach and management. You do things the Quade-way or you take the high-way.

Certainly, Reds’ coach Brad Throne thought along much the same lines as I do, and unceremoniously dumped him from the Reds squad in 2018.

Cooper, in line with his reputation as a locker-room lawyer, was quick to rely on the long term contract he has with the Reds, and refused to go and look for rugby employment elsewhere, despite rumours of offers from Japan and France. He chose to become the most expensive club rugby player in history, plying his trade at the local club level whilst still drawing his whopping A$650,000 annual salary from Rugby Australia and the Reds. He was being paid not to play the game at a senior level!

The stand-off between Brad Throne and the Reds on one side and Cooper on the other is not quite over, despite the Melbourne Rebels signing Cooper for the 2019 Super Rugby season.

The Rebels, quite cleverly, know that Cooper still has a year to run on his current contract with RA and the Reds, so they have offered to pay only a fraction of the A$650,000 annual salary that Cooper receives. The Rebels contribution will relieve a portion of the financial cost, but not all of it, and the Reds and RA will still have to cough up the difference!

Cooper has signed a one-year contract and will join the Rebels in mid-November for the start of their 2019 pre-season campaign as he looks to add to his 70 Test and 119 Super Rugby caps.

With Melbourne-born Matt Toomua set to complete his repatriation home in late May, Cooper will have the opportunity to become a critical cog in an Rebels backline featuring the current Wallaby back-three as well as reuniting with his Super Rugby championship winning half partner, Will Genia.

Ahead of the announcement, Cooper could not resist taking a swipe at Reds coach Brad Thorn – who had told the mercurial player he was not part of his team’s plans last season – on Instagram on Monday. He posted a picture of himself handing off Throne during a Test between the Wallabies and the All Blacks. The post included the caption: “Sometimes you are forced out of the place you love but thank god there’s more than one place that loves me.” 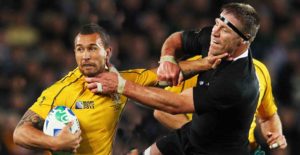 Shortly afterward Cooper shared a new post offering some cryptic messages by saying he will now be playing, learning and “ENJOYING” his rugby in all caps.

We will have to wait and see whether Dave Wessels has made a wise choice with this signing!