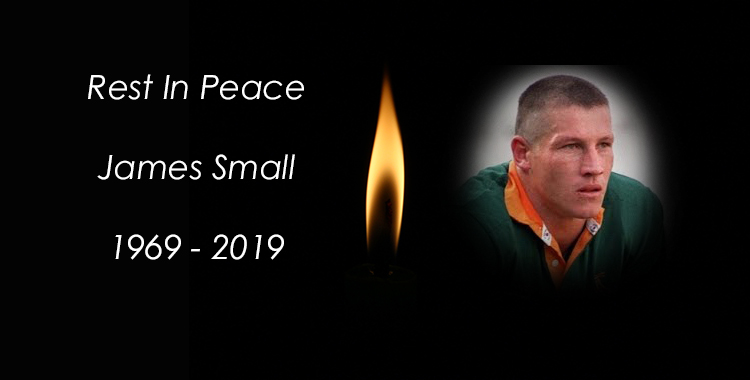 James Small has passed away at the age of just 50 years.

Small passed away on Wednesday morning, 10 July 2019 after succumbing to a heart attack.

Born in Cape Town on February 10th, 1969, James was schooled at Risidale Primary School and Greenside High School in Johannesburg.

In his playing days James represented Wits University in the old Transvaal Rugby Football Union’s Pirates Grand Challenge, going on to play for the then Transvaal, before moving to Natal, and then on to Western Province. He was a Currie Cup winner with both Natal and the Western Province.

He made his international debut for the Springboks against the All Blacks at Ellis Park in Johannesburg in 1992 and went on to play in 47 Tests during the next five years, until 1997. He represented South Africa at the 1995 Rugby World Cup.

James Small scored 20 Test tries, the last one on the day he made his final appearance in Green & Gold, against Scotland in 1997.

His 20th try gave him the honour of being the leading Springbok try scorer at the time, eclipsing Danie Gerber’s record. He was also the leading try scorer in the 1996 Super 12 season.

James Small earned a Rugby World Cup winners medal in 1995, with a memorable performance in the final when he faced the formidable challenge of containing Jonah Lomu in that epic game played in Johannesburg. Small’s unrelenting focus and commitment on that day contributed to Lomu forever remaining try-less against South Africa, the only team that the legendary All Black did not score against.

In recent years, Small turned to coaching, and assisted Robert du Preez at NWU-Pukke and the Leopards before joining Pirates in Johannesburg as assistant coach.

A combatitive, fearless rugby player, James Small sometimes struggled to maintain control over a fiery temper, which earned him the reputation of being something of a Springbok “bad boy”- mostly for his verbal abuse of his opponents on the field of play. He became the first Springbok ever to be sent off, as a result of verbal dissent towards referee Ed Morison.

Those that knew James Small know that he was driven by an enormous passion for the game and an undeniable will to win. Therein lay his approach to each and every game and each and every opponent. Once the game was over, James was a good friend to all who knew him.

James Small was a legend in his own time, and rugby is the poorer for his passing.

Thank you for the memories James, and the excitement of watching you play.

May you Rest in Peace!