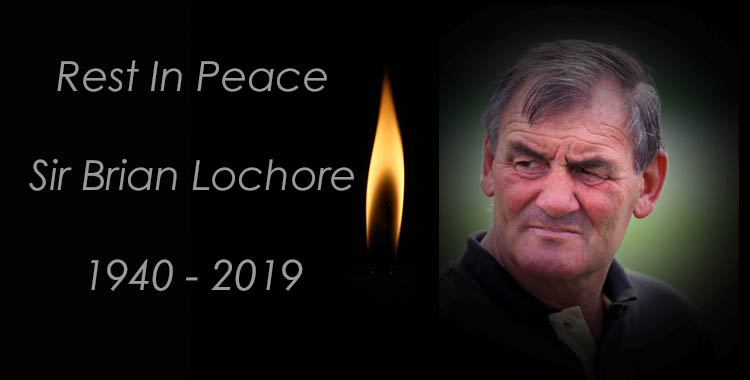 Back in 1970 I was privileged to watch Sir Brian Lochore lead the All Blacks out onto Cape Town’s Newlands stadium for the second Test of that series against the Springboks. (This was the Test in which the infamous incident occurred in which Fergie McCormick knocked some of Syd Nomis’ teeth loose.)It was my first experience of a Springbok/All Black Test match, and it will live in my memory forever.

The memory is enhanced by the fact that I once owned one of Brian Lochore’s All Black rugby jerseys from that 1970’s tour. It was not one that he had worn in a Test match, rather it was one of the jerseys exchanged after an All Black game against one of South Africa’s provinces. I donated the jersey to a rugby museum where I know that it still resides to this day.

These memories come flooding back with the news that Sir Brian Lochore had passed away at the age of 78. He left us on Saturday the 3rdAugust after a battle with cancer.

His reign as captain coincided with a golden age of All Black rugby during which they didn’t lose a single Test match between the fourth Test against South Africa in 1965 and the first Test in South Africa in 1970.

After retiring from playing the game, Brian Lochore remained involved in the game he loved, first coaching at a club level in the Wairarapa, and then taking on the Wairarapa Bush provincial team in 1981, winning promotion to the first division of the National Provincial Championship.

He was elected an All Blacks selector in 1985 and then in 1986 coached the All Black side, initially without 28 of New Zealand’s top players who had chosen to go on the rebel tour to South Africa.

When the rebels returned and had served a two-match ban many were again available for selection, and Lochore was able to select the best he had available for the rest of his time as coach. He was joined by Alex Wyllie and John Hart in the selection of the All Blacks that went on to win the first Rugby World Cup in 1987.

Brian Lochore retired from coaching at the end of 1987, but stayed involved in the management of the game. He was the All Black team manager for the 1995 Rugby World Cup campaign.

After the 1995 RWC, Lochore was heavily involved in the negotiations that introduced the professionalisation of the sport and the first contracts for All Black rugby players.

Brian Lochore’s standing in New Zealand, not only in rugby but also in farming, saw him involved in many committees while he also served a term as chairman of the national sports funding organisation, the Hillary Commission and his contribution to New Zealand across all fields was acknowledged in 1999 when he was knighted and he received the country’s highest honour, the Order of New Zealand in 2007.

The Lochore Cup named for competition in the Heartland series was introduced in 2002.

May He Rest In Peace.