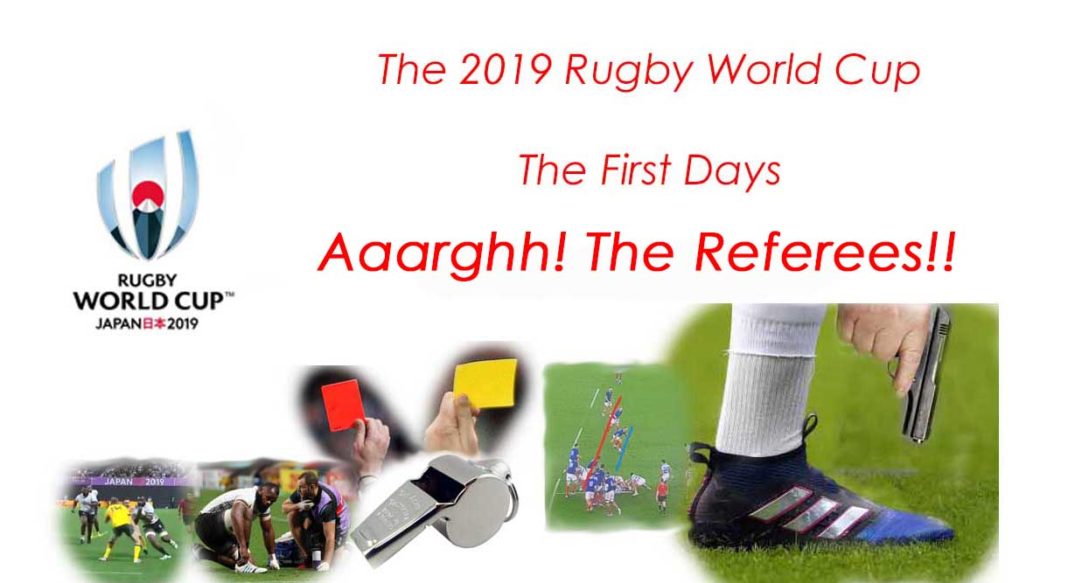 Aarghhh The Referees Are At It Again!

It did not take long.

In fact it was in the very first game of the 2019 Rugby World Cup where we saw the first of what promises to be a plethora of errors by the men trusted to control the games – the Referees and their two Assistant Referees and their fall-back option, the Television Match Officials.

The opening game of the 2019 RWC was handled by the usually admirable and consistent Nigel Owens, along with his Assistant Referees Nic Berry, and Matthew Carley, with New Zealander Ben Skeen watching the game on the television monitors.

One might suggest that this is a fairly competent bunch of senior match officials and that the opening fixture was in good hands?

How on earth did they fail to take action when Japan’s James Moore put a shoulder to the chin of Vasily Dorofeev, the Russian scrumhalf? In terms of the current laws and the express instructions issued to the referees, a shoulder to the head without any mitigating factors is an instant red card.

Inexplicably, James Moore played on. Dorofeev did not, off he went for an HIA and his game was over.

I would not go so far as to suggest that the departure of Moore for the rest of the game would have influenced the final outcome. Russia gave everything they had, but it seemed that Japan had far too much left in the tank at the end of proceedings.

The fact remains that a clear red card incident was simply ignored by the match officials.

We move on to the next game of the tournament and Australia and Fiji take the field.

Early in the game, with Fiji looking to score, Australia’s Reece Hodge takes out Fijian flanker Peceli Yato with a clear no-arms shoulder to the head that prevented a certain score. Somehow Reece Hodge received no sanction for a clearly illegal tackle that passes every test for being classified as foul play and worthy of both a red card and a penalty try!

To be fair to referee Ben O’Keeffe, he did refer the incident to his TMO Rowan Kitt, but Kitt suggested that there was nothing wrong with the challenge! The referee, his two assistants and the TMO clearly did not watch the television replays on their respective TV screens! If they had watched the replay, it is very difficult to grasp their decision that the tackle was fair!

This was clearly an incorrect call.

And this call probably had a direct influence of the outcome of the game!

Fiji were leading 11-7 at the time of the incident. If justice had been seen to be done, the penalty try would have stretched that lead out to 18 – 7 and Australia would have had to play the bulk of the Test with 14 men.

To make matters worse, the incident ended Yato’s participation in the game as he had to leave the field for an HIA, which he failed and was thus unable to take the field again. Perhaps even worse, he will have to sit out a couple of games to go through the concussion recovery protocols, depriving him of opportunities at the most important rugby competition in the world.

Australia and Hodge himself were incredibly lucky, although Hodge has subsequently been cited for the incident and will face a disciplinary hearing in the next couple of days.

Interesting too, is Michael Cheika’s reaction to the incident. He immediately deflected the discussion, saying that he had not had a chance to view the replay, and then launched into an attack on the match officials for “unnecessarily focussing on David Pocock!”

I would counter his attack on the match officials by citing yet another incident late in the game that saw Michael Hooper clearly enter a ruck from the side, so far offside that he actually made contact on the hip, and bound onto the hindmost of three Fijians in the ruck, and then he tried to lift the Fijian’s feet from the ground. The outcome? A penalty to Australia for Fiji “going off your feet”.

No, Mr Cheika, the referee was clearly favouring your side!

Japan and Australia were the victors in those first two matches, who could know how the games might have changed if the winners were down to 14 men?

We then move on to the clash between France and Argentina.

This time we had Angus Gardner in charge, with Assistant Referees Jaco Peyper and Brendon Pickerill, while the TMO was Marius Jonker.

Once again the squad of Match Officials did not cover themselves with glory.

There was a particularly nasty incident when the Pumas’ Matias Moroni grabbed the hair of his French opponent and pulled with some force. Unnoticed by the Match Officials, the incident did not escape the notice of the Citing Commissioner, and Moroni has been issued with a Citing Commissioner’s Warning (CCW) – the equivalent of an off-field yellow card, which will remain on his record for the rest of the RWC. (If a player gets three yellows or CCWs during the Word Cup they will face a disciplinary hearing.)

Not only did Mr Gardner and his squad miss that incident, but the offside line appeared to be nothing more than a rumour that Angus Gardner preferred to ignore.

Throughout the game he allowed the defence to creep up past the official offside line and pressurize the ball carriers.

The entire game was blighted by constant offside play by both teams – and it destroys the game of rugby as a spectacle!

In one specific incident Louis Picamoles intercepted a pass by the Puma’s scrumhalf Cubelli, when Picamoles was clearly at least 1,5 meters off side in the moment before the interception. Angus Gardner ruled it as “onside” – take a look at the picture and decide for yourself.

Throughout the game clear forward passes, a couple of knock-ons, obstructive running, late tackles, and off-the-ball shoving blighted the contest and were wholly ignored by the Match Officials. It was not good, and contributed to the increasingly bad tempers of the players, with a game that ended in fisticuffs after the final whistle.

Right at the end of the game the Argentineans were right on the French goal line and thought they had earned what would probably have been a match-winning penalty as the French transgressed over the ball. Once again, Mr Gardner thought otherwise. My own view of the incident was that the correct decision would have been to award the penalty!

A third incident where a refereeing mistake had an influence on the outcome of the game!

Three games, all influenced by clear mistakes by the Match Officials! There is something very very wrong with that!

We now move on to the Test between South Africa and New Zealand.

Let me be very clear on this one – I do NOT believe that the referee had a direct influence on the eventual outcome of the game.  The Springboks have only themselves to blame for two silly mistakes, and a wobbly 20-minute period that handed the game to the All Blacks.

But he certainly did have an indirect influence on the whole flow of the game.

First and foremost, how did he and his Match Officials ignore the fact that Joe Moody had his elbow or hand on the ground in the first three scrums of the game? Clear penalties in terms of the Laws of the Game! In each incident, referee Jérôme Garcès might be able to claim that he was unsighted as he was on the other side of the scrum, but all three incidents happened within 10 meters of his assistant, Romain Poite. In two of the incidents the Springboks actually appealed to Poite while pointing at Moody’s hand on the ground. Mr Poite, and by inference Jérôme Garcès, ignored the transgression. Later in the game there were at least two more scrums where Moody used his elbow or hand on the ground for support, both directly in front of the other Assistant Referee Karl Dickson, and again both were ignored!

And then there was the scrum penalty against a dominant South Africa! Steven Kisthoff had simply monstered Nepo Laulala,who slipped his bind, and collapsed flat onto the ground. Jérôme Garcès penalised Kitshoff in a moment that even drew comment from the TV commentators as being clearly incorrect.

This was one of the 11 penalties given against South Africa as Jérôme Garcès simply ignored transgressions by the All Blacks, giving a scant two penalties against them in the entire game.

In yet another demonstration of the referees ignoring the offside Law, Garcès allowed both sides to creep up at the rucks, crossing the offside line with impunity. He did ping the South Africans for offside, once, in general play on a late call by none other than Romain Poite, a penalty that gave the All Blacks an additional 3 points on the board.

The All Blacks were never penalised for offside play.

Yet another area of play that Jérôme Garcès simply ignored was the contest for the ball on the ground. There were at least 6 incidents where it seemed that South Africa had earned a turnover penalty, where Garcès ignored the moment and allowed play to continue until the All Blacks had wrested the ball back from the Springboks. He was much quicker to blow his whistle when the momentum was going the other way!

I must add that South Africa were perhaps fortunate when Mr Garcès chose to only penalise Makazole Mapimpi for “no clear release” after he had chased back with a superb bit of scramble defence. He could well have seen a yellow card for that incident and for a possible deliberate slap down of the ball split seconds later.

In essence, all of the first four games of the 2019 Rugby World Cup were directly and indirectly influenced by the errors and incompetence of the Match Officials.

This is simply not good enough! The World Cup is supposed to represent the very best of our game, and should not be ruined by the incompetencies of the Match Officials!