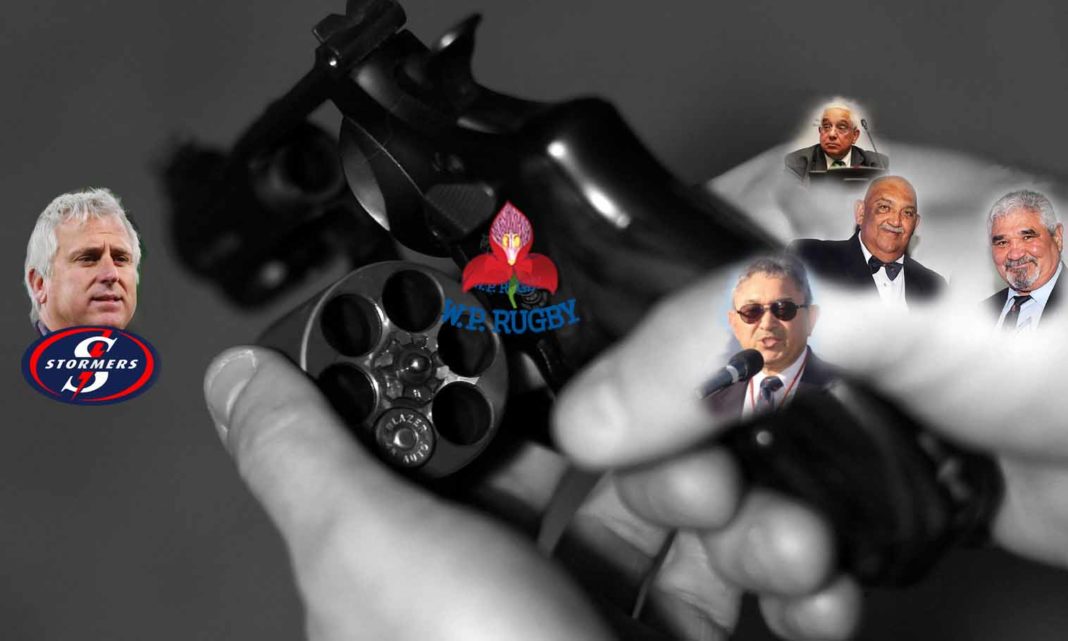 Shooting Youself In The Foot – WP-Style

Rassie Erasmus left the employment of the Western Province Rugby Union citing the constant interference of amateur administrators in the professional structures of the game as one of his frustrations and a prime reason for leaving Newlands. Gert Smal asked for his contract to be terminated early, while remaining publicly silent on his reasons for wanting to leave Cape Town. Privately, he cited the constant interreference in rugby related matters by the part-timers who make up the Board of the Western Province Rugby Union.

These are two of the finest professional rugby administrators, coaches, and talent spotters in the game, and they could not handle the heat in the kitchen that is the WPRU.

The in-fighting and parochial squabbling within the Western Province Rugby Union is the stuff of soap operas.

Individuals seek election to the Board for personal and highly parochial reasons, there are agendas within agendas, some with hidden codicils and secret agreements. Nepotism and partiality are the order of the day. If South Africa is a country where we speak of “state capture” then the Western Province Rugby Union is the subject of frequent coupes de tat, and “union capture” for personal reasons.

There is no doubt that the amateur administrators have the professional structures of the union firmly in their sights. The public disunity between WP Rugby’s full-time CEO Paul Zacks and newly elected union president Zelt Marais has made headlines on various occasions in recent months, with Marais reportedly refusing to talk to Zacks. Marais is reportedly pushing very hard for the amateur arm to take complete control of the professional arm of the union, with Zacks’ job and future being on the line. Marais apparently wants his own acolytes to take over the running of the professional side of the game, with ex-Springbok coach Peter de Villiers and ex-‘Bok Sevens coach Paul Treu amongst those being mentioned.

Powerplays are more frequent than in 20/20 cricket.

The Western Province, once the most powerful union in the country, and one of the richest, has become both morally and financially bankrupt as incompetent amateurs have ripped the heart out of the union, flung it on the ground and then stomped on it with almost malicious glee.

The “political” bickering is a poor reflection on those elected officials who avidly seek personal power, prestige, reflected glory, and a chance to feed from the gravy train trough provided in the executive suite.

It is not about the game of rugby and all about the personal agendas and egos of the rugby politicians.

They do not care one iota about the impact they have on the players and the game itself, they care only for the opportunity to sit in the comfortable chairs and be served expensive canapes and whisky by obsequious yes-men.

2019 has been a nightmare year for supporters of this proud old union. The internecine squabbling found its way into the public eye, triggered by a destructive and costly civil war that has impacted on the players and their support structures, as well as the financial wellbeing of the union itself.

Public denials followed, but the evidence remined visible to all.

And the amateurish interference has not stopped.

If ever there was confirmation of the constant interference by those agenda-driven amateurs in the running of the professional game, it was seen on Tuesday when Robbie Fleck was hauled before the Board for further discussions about his future as coach of the Stormers.

Now I am no fan of Robbie Fleck’s coaching strategies and game plans, but I am even less enamoured with the blazer-wearing part-timers who seek to interfere with selections, coaching and playing matters and team management processes in the middle of a rugby season.

South Africa has a track record for treating coaches as expendable commodities and for placing as many hurdles in a coach’s path as possible. This is not a new phenomenon. Witness Harry Viljoen being fired by fax. Witness Jake White being called back from a Springbok tour to come and explain himself to the SARU Board. Witness John Plumtree being dumped by the Sharks and replaced by the same Jake White. Witness the treatment of John Mitchell by the Lions. Witness Thelo Wakefield flying to Australia to challenge Robbie Fleck about the Stormers touring record. Cheeky Watson at the Kings, and more.

And on Tuesday the WP Board again demonstrated their willingness to interfere with the equilibrium of their team by hauling Robbie Fleck in to explain himself – again.

We know that they threatened him with instant dismissal three weeks ago, unless the Stormers beat both the Bulls and the Jaguares in the next two weeks. The Stormers beat the Bulls but lost to the Jaguares, so Fleck must have gone to that meeting with his office keys in his pocket, ready to hand them over.

We already know that Robbie Fleck is leaving the Stormers at the end of this season, so what exactly is the point of hauling him in to face the Board with just five fixtures left in the season?

Surely they were not considering firing him and ensuring that the season will end badly for their team? Although……. This being the Western Province that is probably precisely what the blazer-wearers had in mind.

The outcome of the meeting was that Fleck would continue in his position for now, and John Dobson will assume the head coach responsibilities at the end of the current season.

What was the point of the meeting then?

Just another power-play by a bunch of incompetent egomaniacs?