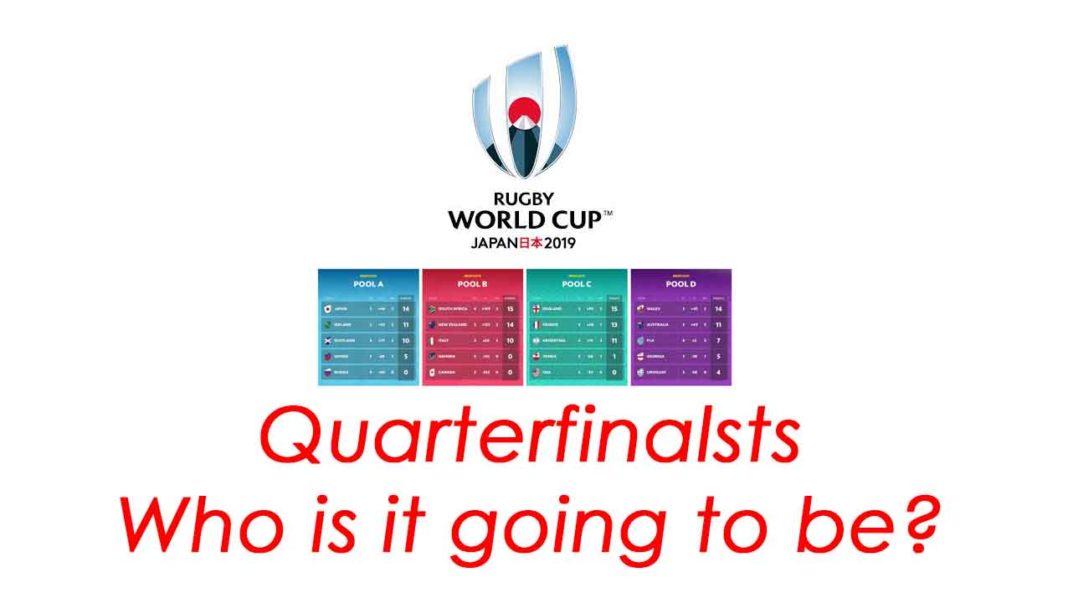 Where are we now, and who is likely to play who?

At the moment, with 32 matches played, the Pool Stages of the 2019 RWC are not yet complete.

The final standings in each Pool may change, but we are unlikely to see any real movement in the teams that will qualify for the knock-out stages of the Rugby World Cup.

Only Pool A remains wide open.

Let’s look at each Pool, and make a prediction or two about who will play who in the quarters.

As matters stand, Japan head the Pool after three wins in three starts. They have 14 log points, but may rue the fact that they missed out on a bonus point that would have likely ensured their safety before their final game against Scotland. If Scotland can win, with a bonus point, they can overtake the hosts by jumping to 15 log points. All Japan need to qualify is a draw, although they would surely prefer a win. A draw would put them on 16 points. A win will put them on 18 points, 19 if they can bank another bonus point.

Ireland occupy the second place on the log, with 11 points after 3 games, with two wins and one loss. They do have their full complement of 3 bonus points. They still have to face Samoa, but are very likely to take the win with a bonus point, which could see them finish on 16 points.

Only Russia have completed their 4 rounds, and they will certainly be going home from Japan.

Samoa still have a game in hand, but they face Ireland on Saturday 12 October, and are unlikely to beat the men in green. Whether they beat Ireland or not, they will certainly be going home, because even a bonus point victory will not lift them beyond 10 points.

Japan beat Scotland, Ireland beat Samoa – Japan will top Pool A, with Ireland second – both progress to the quarterfinals.

The only other scenario would be for Ireland to lose to Samoa, without adding to their bonus points, while Scotland beat Japan. In that scenario, Ireland would be knocked out of the tournament.

Japan to beat Scotland, and Ireland to beat Samoa – Japan will head the Pool, Ireland second.

Namibia and Canada will be heading home, no matter the result of their final game against each other.

Italy, on 10 points, would need to beat New Zealand with a bonus point for tries scored, and a points spread of at least 129, which is about as likely as the current Duke of Edinburgh being chosen to lock the scrum for Scotland. It is a foregone conclusion that Italy will be going home.

South Africa have already qualified for the quarterfinals, while New Zealand have the formality of disposing of Italy to secure their quarterfinal spot. Even a draw, which is only likely if the weather intervenes and prevents the game from being played, will hand them the 2 points they need to top the Pool.

New Zealand will top the Pool, South Africa are second.

Argentina, Tonga, and the USA are going home. France and England will progress to the quarterfinals.

The only question that remains to be answered is which team will top the Pool.

They play each other Saturday 12thOctober, weather permitting.

England, on 15 points have the advantage, while France have 13 points. If France were to score a bonus point win, they will go to 18 points and top the Pool. England simply need to win to top the Pool.

With a team in disarray as a result of the standard internal dissension that is so much part of French rugby, it is highly unlikely that they will be able to beat England. England will top Pool C, France will be second.

Australia and Wales each have one game left, with Wales having to play Uruguay, and Australia facing Georgia.

Both teams should bank a bonus point win in those final games.

Wales to top the Pool, with Australia second.

How will the Pool Results impact on the quarterfinals?