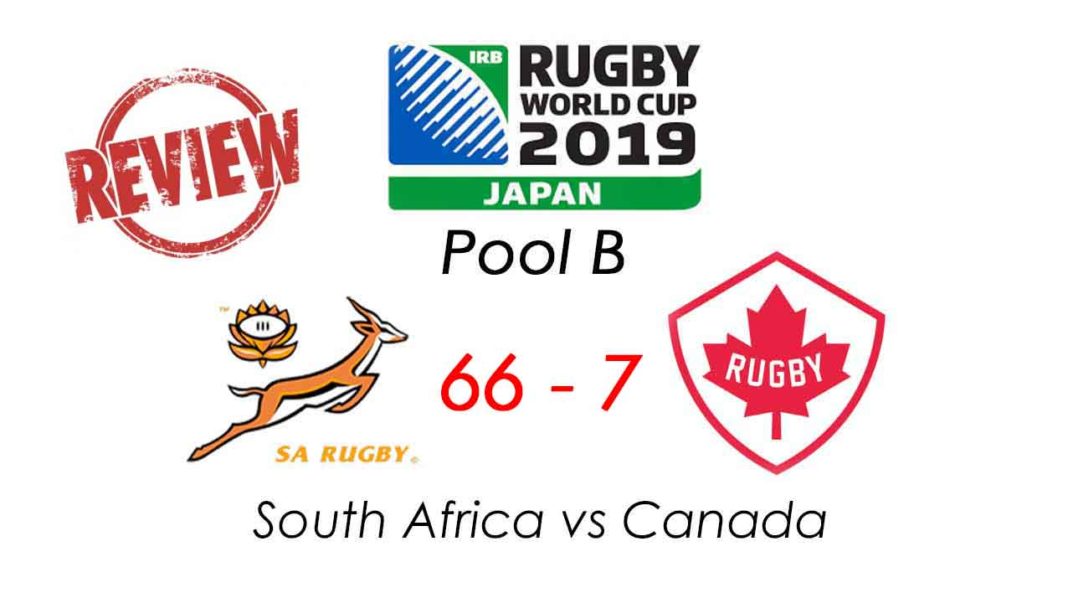 This was one of those mismatches that should not be allowed on the fields of rugby at the highest levels.

Canada, for all their bravery, and for all their pride in wearing the jersey of their country, were on a hiding to nothing from the first whistle to the last.

First and foremost, this was rugby’s equivalent of golf’s Pro/Am competitions. The amateurs and part-timers, assisted by a couple of seasoned pros, up against a team that consisted wholly of professionals. It was never going to be a fair contest.

Just to add insult to injury, Canada were playing the Springbok “dirt trackers” –something of a slap in the face that suggests that the Canadians are not enough of a challenge to warrant deployment of the “A” team.

And the truth of the matter is that is exactly what this was – a complete mismatch, much like suggesting a flyweight journeyman boxer should take on a heavyweight contender for the world title.

It should not be allowed to happen.

Has this game done anything for rugby in Canada?

Did this game do anything for South African rugby?

The South Africans simply overwhelmed the Canadians in the first 40 minutes in a display of almost arrogant supremacy as they toyed with their opponents and scored tries at will. Bluntly, whether Canada had retained the services of their banished lock forward Josh Larsen or not mattered not a fig – even while they were at a full complement of 15 they had no answer for the Springbok focus and intensity.

In my preview to this game I made mention if the fact that the Kobe Misaki Stadium is one of the most difficult rugby venues at the 2019 Rugby World Cup. No matter the temperature outside the stadium, indoors, under the roof, it is invariably hotter, with humidity that is often unbearable – especially in a fast paced contact sport such as rugby. Those that have played there in the 2019 RWC have reported problems with dehydration and fatigue, muscular spasms, cramps and the like. Inevitably, the second half of every game has deteriorated as the problems of playing in such conditions manifest themselves.

From my perspective, the Springboks planned for the conditions, and played their game accordingly.

Once the four try bonus point was banked, the quarterfinal progression assured and victory was sealed, it was job done, there was no further need for excessive exertion, heat exhaustion, and exposure to possible injury. The Springboks visibly took their foot off the gas. Concentration was less focussed, the intensity eased, the pace slackened, and the single-minded pursuit of tries became a bit of fun. They went into cruise-mode.

And that was about it.

There is truly nothing more to say about this game.

It is my habit to watch a game live and simply make notes of incidents or moments that I want to watch again. I also try and get a feel for each individual player’s performance on the day. Once the game is over and I have had a chance to think about the game, I go back and replay my recording of the game. This is my time to re-look, to analyse, and to investigate. Once this exercise has been done, I sit down and write my review.

I have not bothered with such a laborious process this time around, as the game with really a no-contest situation, and doing a careful assessment of each player’s performance is impossible since they are not being measured against an opponent of equivalent standard.

Hence, these are simply my initial impressions of each player’s performance. I have not given the usual score out of 10.

Tried to inject himself into the game at every opportunity, but we did not see much of his stepping ability. Safe under the kicked ball, but with zero pressure on him at all. He needs to be measured under pressure before we make assumptions about his suitability as a replacement for the incumbent Willie le Roux.

I am not a fan of his “hesitation waltz” stepping and dummy shows of the ball – he even does it when he is out on the wing and simply needs to light the after-burners and go. He does not seem to trust his own pace. Scored a good try.

He can play inside or out, and makes sure the team gets over the gain line. Getting better and better with each game.

Getting fitter with each outing, and seems to be slimming down in the process. A wise old head that is very safe in the midfield.

Some great skills, but sometimes seemed to be a bit lazy with the ball in hand. Has the annoying habit of stepping inside when he gets the ball and not trusting his pace to take the ball around the outside. Far too many of our younger wings think they have to try and cut inside and step and wiggle for a try.

He loves no pressure rugby. Solid performance, but my doubts remain.

He had some fun, but it was a zero-pressure situation with nobody distracting him from the job at hand. A great turn of pace to score his first try. Not sure that this game tested him.

Probably the best loose forward on the field.

His hands let him down too many times. Sometimes his positional awareness seemed great, at others  he seemed to be wandering around. Just seemed a bit off his game.

Pleasing to see him get through two games in four days – his fitness is returning, and so is his form. Not quite as assertive as he can be, but he must have been somewhat fatigued after Friday’s run against Italy.

Had a ball. Ran around like an extra loose forward.

Boy, did he enjoy himself! Given the freedom to do whatever he wanted, he did just that, running, passing, offloading, smiling……. Elements of Brodie Retallick in his game.

Did exactly what he was expected to do. Carried the ball up with some serious intent.

Probably his last game for his country, and he smiled all the way. Great hands. Cramps ended his day. A credit to the game of rugby.

Scrummed well and made some strong carries, but seemed lazy for much of the time.

Did what he was supposed to do, but still seems to be off his timing when attempting the poach at the breakdowns.

Powerful carries. But was not really needed in the scrums where is usually so devastating.

Getting better and better with every game. Scored a try thanks to a powerful carry.

Took over from Reinach and kept the game going. Not much else to report.

Showed that he can play centre if he wants to. Nothing else to report.

In a one-sided game such as this there can be no individual player assessments when all the team did was defend, all day.