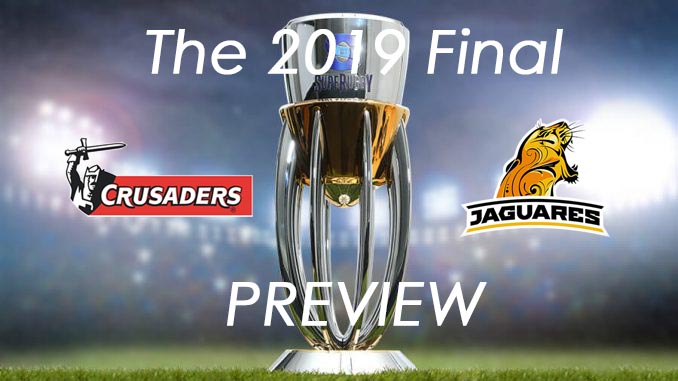 The Crusaders are heading into their 14th Super Rugby Final on Saturday when they host the Jaguares in Christchurch.

It is the Jaguares’ first finals appearance.

The Crusaders are the most successful Super Rugby team in the history of the competition, and will be looking to lift the trophy for the 10th time.

The Crusaders finished top of both the New Zealand Conference and the overall Super Rugby log, which gives them the right to host the Final game in Christchurch.

South Africa and Super Rugby’s most experienced referee, Jaco Peyper will be the referee in his third Super Rugby Final.

Peyper started refereeing in 2001 at age 20 and made his first class debut in 2007. His career started in the Currie Cup and he progressed through Sevens Rugby and World Rugby U20s, to Super Rugby and on to Test match appointments. He is the longest serving referee on the Super Rugby refereeing team.

In Round 8 this year he took charge of his 100th Super Rugby match. He has increased that to 105 matches. This puts him third on the all-time Super Rugby referee list behind Jonathan Kaplan on 107 and Steve Walsh on 110.

Peyper has become one of the senior test referees in world rugby having refereed 46 Test matches and will officiate in the 2019 Rugby World Cup in Japan.

The Crusaders will be running out for their 14th Super Rugby Final, more than any other team in the competition’s history.

In fact, the Crusaders have won more Super Rugby Finals than any other team has even competed in. They have won 9 of the 13 they have played in so far. They are looking to make that 10 from 14.

The Bulls and Reds can boast that they are the only teams in Super Rugby to have a 100% win rate in Finals.

In contrast, the Sharks, Lions, and Stormers are the only teams with a 0% win rate at this stage.

Teams that never made it to a Final are the Rebels, the Cheetahs, the Force, the Kings, and the Sunwolves. Three of those teams have disappeared from Super Rugby, the Sunwolves are leaving at the end of 2020, which will leave the Rebels as the sole survivor of the non-finalists!

The Jaguares have not played in a final before, but 2019 will break that duck.

Only twice in Super Rugby history has any team won a Final when playing outside their home country, with the Crusaders pulling off this trick against both the Brumbies in 2000 and the Lions in 2017.

An early lead is often the deciding factor in the Final. Seven of the last nine Finals have been won by the team holding the lead at half-time, including each of the last five on the trot.

The last team to win a Grand Final after trailing at the break was the Chiefs in 2013, who bounced back from a 16-9 half-time deficit against the Brumbies to earn a 27-22 win at full-time.

The Jaguares are presently on a seven-match unbeaten streak.

They will believe that they have a very real chance to win the 2019 Rugby Championships on Saturday night.

But it is not going to be an easy task. They will be attempting to get the better of the most successful team in the history of Super Rugby.

Rugby history that is not on their side.

As mentioned earlier, only one team has ever won the Super title playing outside of their home country, and that team is these very Crusaders who await the Jaguares in Christchurch!

This will also only be the third time the Crusaders and Jaguares meet in Super Rugby history, the Crusaders winning the first two matches and only conceding three points in the first half across both of those encounters.

However, this is 2019. These Jaguares have built something of a reputation for being able to win matches in both Australia and New Zealand.  The Crusaders have not yet had to deal with this new, more focussed, better disciplined Jaguares side. It will be a new experience for both teams, in so many ways.

And finals are finals – anything can happen.

Scott Robertson has made two injury enforced changes to the Crusaders’ starting XV for Saturday’s Super Rugby Final against the Jaguares.

Robertson has named a consistent run-on side from last week’s semi-final, with the exception of lock Scott Barrett and inside centre Ryan Crotty, who have both been ruled out of the final in Christchurch with hand injuries.

Mitchell Dunshea joins captain Sam Whitelock as the starting locks, and Braydon Ennor slots in to the midfield alongside Jack Goodhue, in the absence of Crotty.

21-year old Will Jordan returns from injury to re-join the matchday squad as back-line cover.

Gonzalo Quesada has made a few changes to his matchday 23 for Saturday’s Super Rugby Final against the Crusaders in Christchurch.

In the backline, Matias Moroni moves from left wing to right wing for Saturday’s match with Ramiro Moyano taking over the No.11 jersey.

Sebastián Cancelliere, who started in the No.14 jersey last week, drops down to the bench.

Amongst the forwards, Marcos Kremer returns to the starting line-up in the No.7 jersey with Tomas Lezana dropping down to the bench.

There is one change to the front row with Nahuel Tetaz Chaparro coming into the starting XV and Mayco Vivas taking his place amongst the reserves.

Meanwhile, a very familiar face will be on the Jaguares’ bench in the form of Argentina legend Juan Manuel Leguizamón.

With Leguizamón included, Francisco Gorrissen drops out of the matchday 23.

I have thought long and hard about what I should say about this game.

This is a final, and so much of has happened during the regular season preceding the final comes to naught in such a game. The motivation is very different, the focus is so much more intense, the entire mindset is different too. A small mistake, a single lapse in concentration, a moment of indecision  can be fatal in a final where the briefest moment of brilliance can turn a game on its head.

We know that the Crusaders are hugely experienced in the pressures and intensity of finals rugby – they have been there before, as a team many times, and as a playing group too. This is their third final in three years. They know what faces them.

The Jaguares are going where no Jaguares has gone before. They have to find a whole new mindset, a whole new level of motivation, and they have no experience to draw on.

Save for one small little well of experience that should not be ignored.

They are mostly multi-capped international players and have a wealth of Test match rugby experience to draw on.

That might help a little when they take on the Crusaders in Christchurch.

The statistical analysis of the two teams in 2019 makes interesting reading:

With the Crusaders 251 clean breaks in 17 games, they are way ahead of the Jaguares, who are down at ninth on the table with 171, and average of 10 compared to the almost 15 of the Crusaders.

The two teams are close in the number of carries in the season, with the Crusaders once again topping the list with 2134 and the Jaguares coming in at third with 2021.

The Crusaders have beaten 438 defenders, while the Jaguares have 354 to their credit.

The Jaguares are the better of the teams in the lineouts, with a 91,8% success rate, while the Crusaders lag on 87,2%.

However, in the scrums the Jaguares do have a problem, their 86% scrum success rate is the lowest of the entire competition, while the Crusaders are rock steady at 93%.

The contest on the ground appears to be very even, both teams have a 96% success rate in the rucks. The Jaguares lead the competition with 208 turnovers won, while the Crusaders are second with 89. However, the Jaguares have also conceded the most turnovers in the year, with 250 compared to the Crusaders 236.

Handling, passing, and offloads may be crucial in the final.

The Crusaders are second on the list with 182 offloads, while the Jaguares are 13thwith just 125.

However, the Jaguares are a short head in front with the best numbers in 2019, with 2485 good passes, with the Crusaders second on the overall list with 2408. The total number of passes made has the two teams at one and two on the list as well, the Jaguares on 2756, and the Crusaders on 2731. Ninety percent of these two teams’ passes hit their intended target.

An area of concern for the Jaguares will be their handling, they have the most handling errors in the competition, with 307, while the Crusaders  have 263.

Both teams concede rather a lot of penalties, the Jaguares 162 in the season, and the Crusaders 139.

Only the Bulls’ Handré Pollard (38) has kicked more penalty goals in Super Rugby 2019 than the Jaguares’ fly-half Joaquin Diaz Bonilla (22), the Crusaders will need be wary of not conceding too many opportunities within his range.

The Crusaders’ wing Sevu Reece, is the top try scorer in Super Rugby 2019 with 15 to his credit, almost double the amount of the Jaguares’ best Matias Orlando  who has 8 tries. Reece needs one more to equal the record for most tries in a single Super Rugby season, the 16 scored by Ben Lam in 2018.

Reece also has made 39 clean breaks in 2019, the most in the competition and double the amount of the leading Jaguares’ players Sebastian Cancelliere and Emiliano Boffelli with 18 each.

On defence, both teams have been right up there, with the Crusaders making 85,7% of their tackles and the Jaguares 85,6%. They are  3rd and 5th on the overall list for tackling.

No team has averaged fewer points conceded per game than the Crusaders (17.5) and the Jaguares (20.8). The Crusaders have restricted their opposition to 357.2 metres per game in Super Rugby 2019, the fewest in the competition and 47 metres better than the Jaguares at 404.7.

Whatever we wish to read into all those statistics, we cannot rely on them for any clear indication of the probable outcome of this game.

There are just too many immeasurable factors that come into play in a final.

Individual players that step up and do something special. Team units that click and produce a superlative moment. Or an entire team that plays with single-minded, almost murderous intent. Dare we mention a refereeing or TMO decision? Some many different things that could contribute to the result.

Last week we saw Richie Mo’unga at his best, matching the skill and focus of the world’s number one flyhalf Beauden Barrett blow for blow – Mo’unga comes into this game at the very peak of his form, and he carries a confidence that is of huge value when the big moments arrive in a game. Is he going to be the game-changer?

We also saw a contentious refereeing decision that robbed the Hurricanes of one final throw of the dice.

Will it be and individual, like Sevu Reece with one of his magic runs, or perhaps it will be Emiliano Boffelli joining from the back or Matias Moroni finding a moment of space?

Simply, based on their record in 2019, it is the Crusaders that will start as favourites, but these Jaguares have a special mongrel that could well take the game another direction.

Picking a winner is rather less easy than one might expect.

I have to suggest that the two teams are so close statistically, that the game may well be decided by external factors. I have to go with home ground advantage, the travel fatigue that comes with the Jaguares crossing half the world to get to New Zealand, finals experience and history, favouring the Crusaders. I have to think about the pressure of playing in a final too….

The Crusaders, to take it in the final 20 minutes, as the Jaguares finally run out of steam. There will be no more than 12 points in it.